The Balkan Athletics Championships or Balkan Games is a regional athletics competition held between nations from the Balkans and organized by Balkan Athletics. The first games were held in Athens in 1929, [1] and the most recent were being held in Cluj-Napoca, Romania, in 2020. [2] [3]

The Games of 1929 were unofficial, and organized by the Hellenic Amateur Athletic Association (SEGAS). They became formalized after 1930 and have been held regularly since, with the exception of the 1940–1953 period due to the Second World War and post-war turmoil. In 1946 and 1947, unofficial Games were organized, under the name Balkan and Central European Games, in which Czechoslovakia, Poland and Hungary (1947) also participated. [4]

SEGAS were also central to the creation of the Balkan Athletics Indoor Championships in 1994 – a sister indoor event to the main outdoor competition.

The 1940 shot put champion was listed as Arat Ararat from Turkey. The birth name of this athlete was Sokratis Ioannidis, a Greek Orthodox born in Istanbul. Due to political friction between Turkey and Greece at that time, the Turks decided it would be more politically correct to change his name to Arat Ararat. This was the name he was known by in the athletic circles.

The Balkans, also known as the Balkan Peninsula, are a geographic area in southeastern Europe with various definitions and meanings, including geopolitical and historical. The region takes its name from the Balkan Mountains that stretch throughout the whole of Bulgaria. The Balkan Peninsula is bordered by the Adriatic Sea in the northwest, the Ionian Sea in the southwest, the Aegean Sea in the south, the Turkish Straits in the east, and the Black Sea in the northeast. The northern border of the peninsula is variously defined. The highest point of the Balkans is Mount Musala, 2,925 metres (9,596 ft), in the Rila mountain range, Bulgaria.

Montenegro is a country in Southeast Europe. It is located on the Adriatic Sea and is a part of the Balkans, sharing borders with Serbia to the northeast, Bosnia and Herzegovina to the northwest, Albania to the southeast, and the Adriatic Sea and Croatia to the southwest. Podgorica, the capital and largest city, covers 10.4% of Montenegro's territory of 13,812 square kilometres (5,333 sq mi), and is home to roughly 30% of its total population. Montenegrins form the majority of the nation's population of over 600 thousand, while Serbs form a significant minority, followed by Bosniaks, Albanians, Croats and Roma people.

Milo Đukanović is a Montenegrin politician serving as the President of Montenegro since 2018, previously serving the role from 1998 to 2002. He also served as the Prime Minister of Montenegro and is the long-term president of the Democratic Party of Socialists of Montenegro, originally the Montenegrin branch of the League of Communists of Yugoslavia, which governed Montenegro alone or in a coalition from the introduction of multi-party politics in the early 1990s until its defeat in the 2020 parliamentary election.

Southeast Europe or Southeastern Europe (SEE) is a geographical region of Europe, consisting primarily of the coterminous Balkan Peninsula. There are overlapping and conflicting definitions as to where exactly Southeastern Europe begins or ends or how it relates to other regions of the continent. Sovereign states and territories that are included in the region are, in alphabetical order: Albania, Bosnia and Herzegovina, Bulgaria, Croatia, Greece, Kosovo, Montenegro, North Macedonia, Romania, Serbia, and East Thrace. Sometimes, Moldova and Slovenia are also included. The largest city of the region is Istanbul, followed by Bucharest, Sofia, Belgrade, and Athens.

The 1992 World Junior Championships in Athletics was the fourth edition of the international athletics competition for athletes aged 19 years or under. It was held in Seoul, South Korea from September 16 to September 20, 1992. 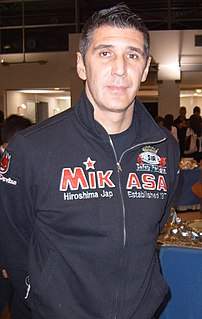 The Balkan Cross Country Championships is an annual international competition in cross country running between athletes from the Balkans. Organised by the Association of the Balkan Athletics Federations, it traces its history back to 1940 and has been held every year since 1958.

The men's shot put event at the 2015 European Athletics U23 Championships was held in Tallinn, Estonia, at Kadriorg Stadium on 12 July.

The 2017 European Athletics U20 Championships were the 24th edition of the biennial European U20 athletics championships. They were held in Grosseto, Italy from 20 July to 23 July.

The 2019 European Athletics U20 Championships were the 25th edition of the biennial European U20 athletics championships. They were held in Borås, Sweden from 18 July to 21 July.

The 2017 Balkan Athletics Championships was the 76th edition of the annual track and field competition for athletes from the Balkans, organised by Balkan Athletics. It was held at Novi Pazar Athletics Stadium in Novi Pazar, Serbia on 15 and 16 July. The host nation Serbia won the most titles at the competition, with nine, and also shared the highest medal total with Romania, at 21. Romania finished top of the team points table.