Ballater ( /ˈbælətər/ , Scottish Gaelic : Bealadair) is a village in Aberdeenshire, Scotland, on the River Dee, immediately east of the Cairngorm Mountains. Situated at an elevation of 213 metres (699 feet), Ballater is a centre for hikers and known for its spring water, once said to cure scrofula. It is home to more than 1400 inhabitants and has had a long connection with the British Royal Family.

The medieval pattern of development along this reach of the River Dee was influenced by the ancient trackways across the Grampian Mounth, which determined strategic locations of castles and other Deeside settlements of the Middle Ages. [2]

In the early 14th century, the area was part of the estates of the Knights of St John, but the settlement did not develop until around 1770; first as a spa resort to accommodate visitors to the Pannanich Mineral Well, then later upon the arrival of the railway in 1866 it was visited by many tourists taking advantage of the easier access thus afforded. The Victoria and Albert Halls, opposite the railway station, were completed in 1895. [3]

Ballater railway station, the former terminus of the Deeside Railway, was closed in 1966, but remains in use as a visitor centre with an exhibition recording the village's royal connection. Many buildings date from the Victorian era and the centre of the village is a conservation area. The old visitor centre was substantially damaged by fire in May 2015 but has subsequently been restored and reopened. [4]

After the bridge over the River Dee had been built the village developed with a "Centrical Church" replacing the churches at Tullich, Glengairn and Foot o' Gairn which had become ruins. [5]

A foundation stone was laid in 1798 and the first service was held on 14 December 1800. The church was designed by Mr Massey of Aberdeen and cost £670. It measured 72 feet (22 m) long by 34 feet (10 m) wide. Doors, at the east and west ends, each had a stair leading to a gallery. The building had four windows at the front and two gable windows, all glazed with plain glass. In the interior was a pulpit, a sound board, a latron and stair and rail. In 1879 a clock was manufactured by Messrs Gillett & Brand of Croydon; the winding mechanism was electrified in 1982. A vestry was added in the early 1850s. [5]

Balmoral Castle, the British Royal Family's holiday home, lies 7 miles (11 kilometres) west, and the family has visited the town frequently since the time of Queen Victoria. Birkhall lies 1 mile (1.5 kilometres) southwest of Ballater. Victoria Barracks is used by the Royal Guard for the castle. [6]

For decades, local stores had Royal Warrants bestowed upon them. Five years after the death of Queen Elizabeth The Queen Mother, who had granted them, the warrants lapsed and, to the chagrin of many townsfolk and especially shop owners, they were not renewed. [7] Shops which still display the arms marking the royal warrant include the butchers, H. M. Sheridan. [8]

In September 2022, following the death of Queen Elizabeth II, the cortège bearing her coffin passed through the village, on its way to Edinburgh. [9]

A Met Office weather station collects weather data at Balmoral, just over 7 miles (11 kilometres) west of Ballater. Like the most of Scotland and the British Isles, Ballater experiences a maritime climate with cool summers and mild winters. Its upland position means temperatures throughout the year are cooler than lower-lying areas, and snowfall more plentiful during winter months.

Ballater is a centre for tourism in Royal Deeside, with the Cairngorms and Balmoral Castle nearby. There are two bike hire shops in the village.

The old Ballater station, containing Queen Victoria's waiting room, was for many years a visitor centre with a replica royal carriage. [12] However, the building was almost completely destroyed by fire in 2015. The rebuilding of the station, bistro and adjoining visitor centre was undertaken and subsequently completed in Autumn 2018. [13] Balmoral Castle is a 10-minute drive from the village.

There are many walks from the village. For the easy going walker, there is Craigendarroch, a small, peculiarly shaped hill near the village. About 12 km (7 miles) south-west of Ballater is Loch Muick. From there experienced walkers can head up the prominent mountain, Lochnagar. Ballater is the home of many challenging walks due to the abundance of Munroes in the area.

There are many well-mapped cycle routes from Ballater into the surrounding areas, including the Deeside Way and a number of popular mountain biking trails. The forests at Cambus o'May have trails for experienced riders. [14]

The River Dee flows through Ballater, and is famous for salmon fishing.

Events in the town include:

The village has its own 'tongue in cheek', on-line newspaper, the Ballater Bugle. [18]

Recently five Ballater residents refurbished the Automobile Association's Patrol Box at Cambus o'May, one of only an estimated 8 to 10 such historical call boxes remaining in situ in Great Britain. [19]

There is a bus garage located near to the village centre which provides an hourly public service to Aberdeen's Union Square bus station. The bus company was granted permission to build a new site at Pannanich Road in December 2014. [20] In April 2015 the bus station was re-opened as a Co-op supermarket. [21] 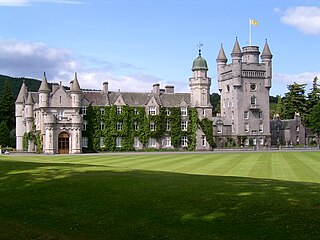 Balmoral Castle is a large estate house in Aberdeenshire, Scotland, and a residence of the British royal family. It is near the village of Crathie, 9 miles (14 km) west of Ballater and 50 miles (80 km) west of Aberdeen. 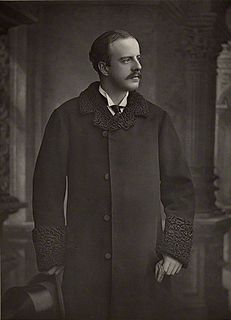 Alexander William George Duff, 1st Duke of Fife, styled Viscount Macduff between 1857 and 1879 and known as The Earl Fife between 1879 and 1889, was a British peer who married Princess Louise, the third child and eldest daughter of King Edward VII and Queen Alexandra. 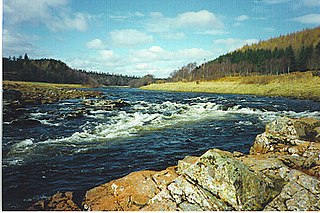 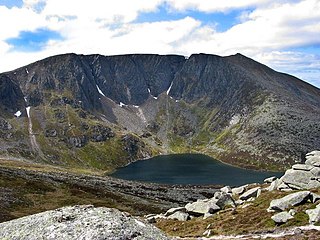 Lochnagar or Beinn Chìochan is a mountain in the Mounth, in the Grampians of Scotland. It is about five miles south of the River Dee near Balmoral. It is a popular hill with hillwalkers, and is a noted venue for summer and winter climbing. 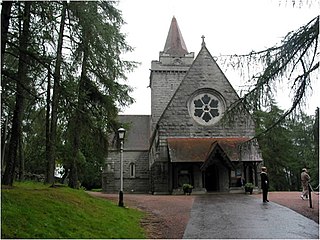 Crathie Kirk is a small Church of Scotland parish church in the Scottish village of Crathie, best known for being the regular place of worship of the British royal family when they are in residence at the nearby Balmoral Castle. 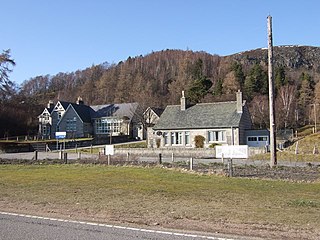 Crathie is a village in Aberdeenshire, Scotland. It stands on the north bank of the River Dee.

Birkhall is a 210 km2 estate on Royal Deeside, Aberdeenshire, Scotland, owned by King Charles III. It is located alongside the River Muick to the south-west of Ballater. 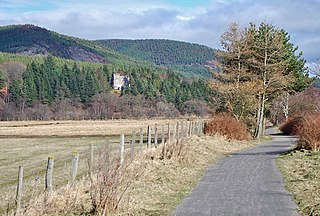 Dinnet is a village in the Marr area of Aberdeenshire, Scotland. Approximately equidistant from Deeside towns Aboyne and Ballater and situated on the main A93 road in the valley of the River Dee, it is said to be the gateway to both the Highlands and the Cairngorms National Park. It is the first village along the Dee to be located inside the park.

Ballater railway station is a former station in the village of Ballater in Aberdeenshire, Scotland. The station was formerly the terminus of a branch line from Aberdeen. 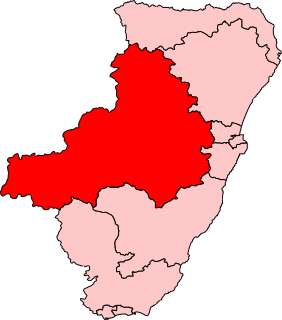 Aberdeenshire West is a constituency of the Scottish Parliament (Holyrood) covering part of the council area of Aberdeenshire. It elects one Member of the Scottish Parliament (MSP) by the first past the post method of election. Also, however, it is one of ten constituencies in the North East Scotland electoral region, which elects seven additional members, in addition to ten constituency MSPs, to produce a form of proportional representation for the region as a whole.

Cambus O'May railway station or Cambus O'May Halt, served Aberdeenshire, Scotland from 1876 to 1966 on the Deeside Railway. It was intended to serve the anglers on the River Dee, tourists, the 1874 Cambus O'May House hunting lodge and the local population of this rural district and stood 39 3⁄8 miles (63.4 km) from the Aberdeen (Joint) station. It was the last stop before Ballater. 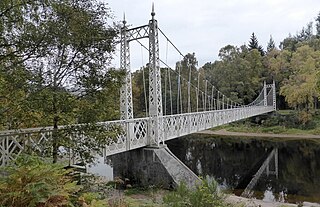 The Cambus O' May bridge spans the River Dee to the east of Ballater, Aberdeenshire, Scotland. It was paid for by the estate of Alexander Gordon, who had grown up nearby. The bridge was built in 1905 and is a suspension footbridge 164 feet (50 m) long and 4 feet (1.2 m) wide. The bridge was rebuilt in 1988 for safety reasons but was badly damaged in the December 2015 Storm Frank. It was repaired and reopened in April 2021.

Wikisource has the text of the 1911 Encyclopædia Britannica article " Ballater ".
This page is based on this Wikipedia article
Text is available under the CC BY-SA 4.0 license; additional terms may apply.
Images, videos and audio are available under their respective licenses.