The Baltic or Baltic German nobility was the privileged social class in the territories of today's Estonia and Latvia. It existed continuously since the Northern Crusades and the medieval foundation of Terra Mariana. Most of the nobility were Baltic Germans, but with the changing political landscape over the centuries, Polish, Swedish and Russian families also became part of the nobility, just as Baltic German families re-settled in e.g. the Swedish and Russian Empires. [1] The nobility of Lithuania is for historical, social and ethnic reasons often separated from the German-dominated nobility of Estonia and Latvia. 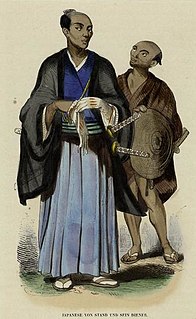 A social class is a set of concepts in the social sciences and political theory centered on models of social stratification in which people are grouped into a set of hierarchical social categories, the most common being the upper, middle and lower classes. 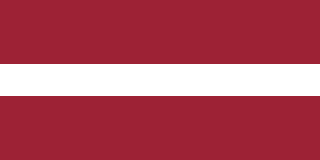 Latvia, officially known as the Republic of Latvia, is a country in the Baltic region of Northern Europe. Since its independence, Latvia has been referred to as one of the Baltic states. It is bordered by Estonia to the north, Lithuania to the south, Russia to the east, and Belarus to the southeast, and shares a maritime border with Sweden to the west. Latvia has 1,957,200 inhabitants and a territory of 64,589 km2 (24,938 sq mi). The country has a temperate seasonal climate. The Baltic Sea moderates seasons, although it has four distinct ones and snowy winters.

This nobility was a source of officers and other servants to Swedish and Polish kings in 16th and particularly 17th centuries, when Couronian, Estonian, Livonian and Oeselian lands belonged to them. Russian emperors used Baltic nobles in government.

The Duchy of Estonia, also known as Swedish Estonia, was a dominion of the Swedish Empire from 1561 until 1721 during the time that most or all of Estonia was under Swedish rule. The land was eventually ceded to Russia in the Treaty of Nystad, following its capitulation, during the plague, in the Great Northern War.

Most of the nobility was "recalled" by Hitler to Germany in late 1939, a few months prior to the annexation of Estonia and Latvia by the Soviet Union in June 1940. Nowadays it is possible to find the successors of the Baltic nobility all around the world.[ citation needed ]

The Soviet Union, officially known as the Union of Soviet Socialist Republics (USSR), was a federal sovereign state in northern Eurasia that existed from 1922 to 1991. Nominally a union of multiple national Soviet republics, in practice its government and economy were highly centralized. The country was a one-party state, governed by the Communist Party with Moscow as its capital in its largest republic, the Russian Soviet Federative Socialist Republic. Other major urban centers were Leningrad, Kiev, Minsk, Tashkent, Alma-Ata, and Novosibirsk. It spanned over 10,000 kilometers (6,200 mi) east to west across 11 time zones, and over 7,200 kilometers (4,500 mi) north to south. Its territory included much of Eastern Europe, as well as part of Northern Europe and all of Northern and Central Asia. It had five climate zones: tundra, taiga, steppes, desert and mountains.

Rural Estonia and Latvia was to a large extent dominated by a manorial estate system, established and sustained by the Baltic nobility, up until the declaration of independence of Latvia and Estonia following the upheavals after World War I. Broadly speaking, the system was built on a sharp division between the landowning, German-speaking nobility and the Estonian- or Latvian-speaking peasantry. Serfdom was for a long time a defining characteristic of the Baltic countryside and underscored a long-lasting feudal system, until its abolishment in the Governorate of Estonia in 1816, in the Courland Governorate in 1817 and in the Governorate of Livonia in 1819 (and in the rest of the Russian Empire in 1861). Still, the nobility continued to dominate the rural parts of Estonia and Latvia via manorial estates throughout the 19th century. However, almost immediately following the declaration of independence of Estonia and Latvia, both countries enacted far-reaching land reforms which in one stroke ended the former dominance of the Baltic nobility on the countryside.

Manorialism or seignorialism was an organizing principle of rural economies which vested legal and economic power in a Lord of the Manor. He was supported economically from his own direct landholding in a manor, and from the obligatory contributions of a legally subject part of the peasant population under his jurisdiction and that of his manorial court. These obligations could be payable in several ways, in labor, in kind, or, on rare occasions, in coin.

Serfdom is the status of many peasants under feudalism, specifically relating to manorialism, and similar systems. It was a condition of debt bondage and indentured servitude, which developed during the Late Antiquity and Early Middle Ages in Europe and lasted in some countries until the mid-19th century.

The manorial system gave rise to a rich establishment of manorial estates all over present-day Estonia and Latvia, and numerous manor houses were built by the nobility. The manorial estates were agricultural centres and often incorporated, apart from the often architecturally and artistically accomplished main buildings, whole ranges of outbuildings, homes for peasants and other workers at the estates and early industrial complexes such as breweries. Parks, chapels and even burial grounds for the noble families were also frequently found on the grounds. Today these complexes form an important cultural and architectural heritage of Estonia and Latvia. [2] [3] 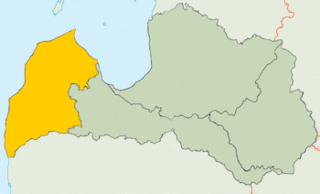 Courland, is one of the historical and cultural regions in western Latvia. The largest city is Liepāja, the third largest city in Latvia. The regions of Semigallia and Selonia are sometimes considered as part of Courland as they were formerly held by the same duke. 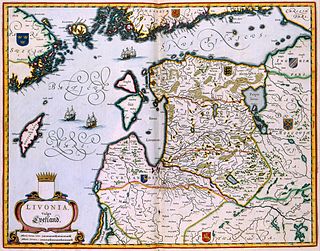 The United Baltic Duchy, also known as the Grand Duchy of Livonia, was a state proposed by the Baltic German nobility and exiled Russian nobility after the Russian Revolution and German occupation of the Courland, Livonian, and Estonian governorates of the Russian Empire. It was proposed in April 1918, after Estonia and Latvia had formally declared independence.

The Duchy of Courland and Semigallia was a duchy in the Baltic region that existed from 1561 to 1569 as a vassal state of the Grand Duchy of Lithuania and from 1569 to 1726 of the Crown of the Polish Kingdom, incorporated into the Polish-Lithuanian Commonwealth by Sejm in 1726. On 28 March 1795, it was annexed by the Russian Empire in the Third Partition of Poland.

The Baltic Landwehr or Baltische Landeswehr was the name of the unified armed forces of Couronian and Livonian nobility from 7 December 1918 to 3 July 1919.

Friedrich Wilhelm Rembert Graf von Berg was a Baltic German nobleman, statesman, diplomat and general who served in the Imperial Russian Army. Berg was a count of the Austrian Empire and Grand Duchy of Finland and the 5th last General-Field Marshal promoted in the history of the Russian Empire. He served as the Governor-General of Finland from 1854 to 1861 and the last Viceroy of the Kingdom of Poland from 1863 to 1874. 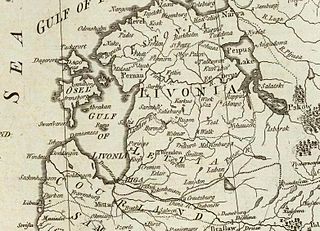 Baltic Noble Corporations of Courland, Livonia, Estonia, and Oesel (Ösel) were medieval fiefdoms formed by German nobles in the 13th century under vassalage to the Teutonic Knights and Denmark in modern Latvia and Estonia. The territories continued to have semi-autonomous status from 16th to early 20th century under Swedish and Russian rule. 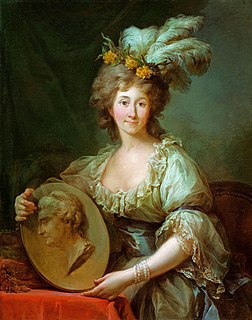 (Anna Charlotte) Dorothea von Medem was born a Gräfin (Countess) of the noble German Baltic Medem family and later became Duchess of Courland. Popularly known as Dorothea of Courland after her marriage to Peter von Biron, the last Duke of Courland, she hosted an aristocratic salon in Berlin and performed various diplomatic duties on behalf of her estranged husband.

Laitse is a village in Saue Parish, Harju County in northern Estonia. 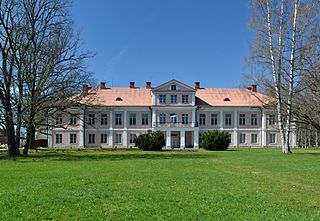 Kabala is a village in Türi Parish, Järva County in central Estonia. 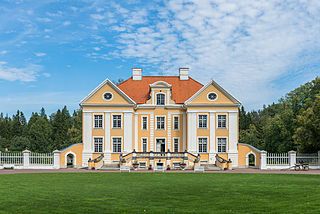 Palmse is a village in Haljala Parish, Lääne-Viru County, in northern Estonia, on the territory of Lahemaa National Park. 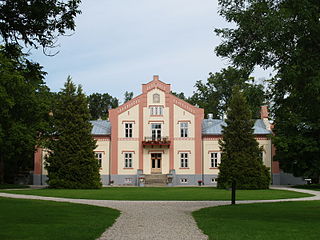 Pädaste is a village on the Estonian island Muhu. It is located on the southern coast of the island by the Gulf of Riga. Administratively, Pädaste belongs to Muhu Parish, Saare County. In 2000 the village had a population of 48.

The Livonian Knighthood was a fiefdom that existed in Livonia. It was formed in 1561 by Baltic German nobles and disbanded in 1917 in Estonia, and in 1920 in Latvia. Like other Baltic knighthoods, the Livonian also had semi-autonomous privileged status in the Russian Empire.

Knabenau or von Knabenau is the name of an ancient Courland nobility, originally from Silesia, and later it spreads in the 16th century in Courland.

Rennenkampff was a noble Baltic German family. It was of Westphalian origin and originated in Osnabrück. They held the title of Edler.

Kotzebue was a Baltic German noble family of Brandenburgish origin, tracing its origin back to Kossebau in Altmark. They held nobility status in the Russian Empire and the Kingdom of Bavaria.