The modern Iranian city of Bam surrounds the Bam citadel. Before the 2003 earthquake the official population count of the city was roughly 43,000. [4] There are various opinions about the date and reasons for the foundation of the citadel. Economically and commercially, Bam occupied a very important place in the region and was famous for its textiles and clothes. Ibn Hawqal (943–977), the Arab traveller and geographer, wrote of Bam in his book Surat-ul-`ard (The Earth-figure):

Over there they weave excellent, beautiful and long-lasting cotton cloths which are sent to places all over the world There they also make excellent clothes, each of which costs around 30 dinars; these are sold in Khorasan, Iraq and Egypt.

The ancient citadel of Arg-é Bam has a history dating back around 2,000 years ago, to the Parthian Empire (248 BC–224 AD), but most buildings were built during the Safavid dynasty. The city was largely abandoned due to an Afghan invasion in 1722. Subsequently, after the city had gradually been re-settled, it was abandoned a second time due to an attack by invaders from Shiraz. It was also used for a time as an army barracks.

The modern city of Bam has gradually developed as an agricultural and industrial centre, and until the 2003 earthquake was experiencing rapid growth. In particular, the city is known for its dates and citrus fruit, irrigated by a substantial network of qanats. The city also benefited from tourism, with an increasing number of people visiting the ancient citadel in recent years.

The earthquake destroyed and damaged much of the city and killed a large part of the population. Since then, Bam has been in recovery.

The 2003 Bam earthquake struck Bam and the surrounding Kerman province of south-eastern Iran at 01:56 UTC (5:26 AM Iran Standard Time) on 26 December 2003. The most widely accepted estimate for the magnitude of the earthquake is 6.6 on the moment magnitude scale (Mw); estimated by the United States Geological Survey. The earthquake was particularly destructive, with the death toll amounting to 26,271 people and injuring an additional 30,000. The effects of the earthquake and damage was exacerbated by the fact that the city chiefly consisted of mud brick buildings, many of which did not comply with earthquake regulations set in Iran in 1989, and that most of the city's people were indoors and asleep.

Due to the earthquake, relations between the United States and Iran thawed. Following the earthquake the U.S. offered direct humanitarian assistance to Iran and in return the state promised to comply with an agreement with the International Atomic Energy Agency which supports greater monitoring of its nuclear interests. In total a reported 44 countries sent in personnel to assist in relief operations and 60 countries offered assistance and support.

Immediately following the 2003 earthquake, the Iranian government began to plan a new city based on population control theories in order to eliminate problems that existed with the old city. The development of the plan took at least six months and resulted in significant complaints against the central government and local government by the Bam earthquake survivors. [5] Nevertheless, government in Tehran continued its plans and currently the city is being rebuilt. The citadel is also being rebuilt with specialist care from the Ministry of Culture and from Japanese universities. The earthquake was an extreme tragedy and stunted the growth of Bam as a city, especially as about half of the city's residents were killed and most of the remainder hurt. [6] Costs of the earthquake mounted to between $700 million and $1 billion U.S. dollars. 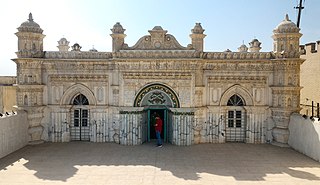 Abadan is a city and capital of Abadan County, Khuzestan Province, which is located in the southwest of Iran. It lies on Abadan Island. The island is bounded in the west by the Arvand waterway and to the east by the Bahmanshir outlet of the Karun River, 53 kilometres (33 mi) from the Persian Gulf, near the Iran–Iraq border. Abadan is 140 km from the provincial capital city of Ahvaz.

Bushehr, Booshehr or Bushire, also known as Bandar Bushehr, previously Beh Ardasher, Antiochia in Persis and Bukht Ardashir, is the capital city of Bushehr Province, Iran and a port city in south of Iran. At the 2006 census, its population was 161,674, in 40,771 families.

Masjed Soleyman also Romanized as Masjedsoleimān, Masjed-e Soleymān, Masjed Soleiman, and Masjid-i-Sulaiman) is a city and capital of Masjed Soleyman County, Khuzestan Province, Iran. At the 2006 census, its population was 206,121, in 51,530 families. Masjed Soleiman is a historical city dating back to Achaemenid Empire. This city is a affluent region in terms of oil and gas reservoirs, Vicinity to Karoon River and spectacular sceneries. On 26 May 1908, the first oil wellbore reached the underground oil reservoir in Naphton Neigborhood. This oil discovery completely changed the economic and social life of Iran and Middle East. From the wellbore, 36,000 liters of oil were extracted daily. Afterwards, During the following decades, over 300 oil wellbores were drilled and completed in this field in order to exploit its reservoirs. Becoming as the first industrial city of Iran, it has played a vital role in Iran economy, industry and modernization.

Zabol is a city and capital of Zabol County, Sistan and Baluchestan Province, Iran. Zabol is near the border with Afghanistan. Referred to as Sistan until the late 1920s, the city was renamed Zabol by Reza Shah Pahlavi. At the 2006 census, its population was 130,642, in 27,867 families.

The Arg-e Bam, located in the city of Bam, Kerman Province of southeastern Iran, is the largest adobe building in the world. The entire building was a large fortress containing the citadel, but because the citadel dominates the ruins, the entire fortress is now named Bam Citadel.

Kerman Province is the largest province of the 31 provinces of Iran. Kerman is in the southeast of Iran with its administrative center in the city of Kerman. In 2014 it was placed in Region 5. Mentioned in ancient times as the Achamenid satrapy of Carmania, it is the largest province of Iran with an area of 183,285 km2 (70,767 sq mi), that encompasses nearly 11 percent of the land area of Iran. The population of the province is about 3 million. 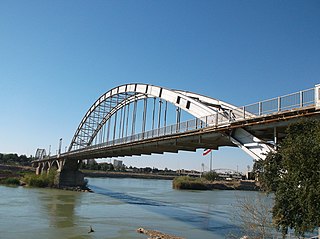 Ahvaz, is a city in the southwest of Iran and the capital of Khuzestan province. Ahvaz's population is about 1,300,000 and its built-up area with the nearby town of Sheybani is home to 1,136,989 inhabitants. It is home to Persians, Arabs, Bakhtiaris, Dezfulis, Shushtaris, and others. Languages spoken in the area include Persian and Arabic, as well as dialects of Luri (Bakhtiari), Dezfuli, Shushtari, and others.

Abu Musa is a 12.8-square-kilometre (4.9 sq mi) island in the eastern Persian Gulf near the entrance to the Strait of Hormuz. Due to the depth of sea, oil tankers and big ships have to pass between Abu Musa and Greater and Lesser Tunbs; this makes these islands some of the most strategic points in the Persian Gulf. The island is administered by Iran as part of its province of Hormozgan, but is also claimed by the United Arab Emirates as a territory of the emirate of Sharjah.

Karaj is the capital of Alborz Province, Iran, and effectively a suburb of Tehran. Although the county hosts a population around 1.97 million, as recorded in the 2016 census, most of the 1,419 km2 (548 sq mi) county is rugged mountain, the urban area is the fourth-largest in Iran, after Tehran, Mashhad, and Isfahan. Eshtehard County and Fardis County were split off from Karaj county since the previous census.

Bandar-e Mahshahr is a city and capital of Mahshahr County, Khuzestan Province, Iran.

Kahnuj is a city and capital of Kahnuj County, Kerman Province, Iran. At the 2006 census, its population was 38,571, in 8,278 families. To the northwest is Mehroyeh Wildlife Refuge.

Sirri Island, is an island in the Persian Gulf belonging to Iran.

Shahdad is a city and capital of Shahdad District, in Kerman County, Kerman Province, Iran. At the 2006 census, its population was 4,097, in 1,010 families.

The 2003 Bam earthquake struck the Kerman province of southeastern Iran at 01:56 UTC on December 26. The shock had a moment magnitude of 6.6 and a maximum Mercalli intensity of IX (Violent). The earthquake was particularly destructive in Bam, with the death toll amounting to at least 26,271 people and injuring up to 30,000. The effects of the earthquake were exacerbated by the use of mud brick as the standard construction medium; many of the area's structures did not comply with earthquake regulations set in 1989. 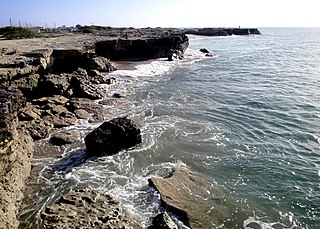 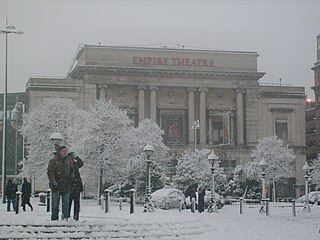 The climate of Liverpool features a temperate maritime variety, with relatively mild summers, cool winters and rainfall spread fairly evenly throughout the year. Since 1867, rainfall and temperature records for the city have been kept at Bidston Observatory, as well as atmospheric pressure records since 1846. However, the site closed down in 2002, and a weather station in Crosby has been used by the Met Office since. Irregular meteorological observations have been taken in the city since at least 1768, with unbroken records extending for long periods of time. This includes observations taken at the Liverpool Dock from 1768–1798, an unspecified location from 1772–1799 and West Derby from 1830–1859 and at other unspecified locations in the city from at least 1860 onward. Continuous observations in different areas of the city have been taken since 1830. In modern times, there have also been other stations to operate in the Liverpool area, including stations at West Kirby (1912–1979), Aigburth (1967–1994), and Liverpool John Lennon Airport (1946–present).