The bank has a network of 628 branches, 689 automated teller machines (ATMs), 123 CDM network, and 15 regional loan centres within the country. It also has an around-the-clock call centre and an around the clock branch at its Colombo office.

In addition to the local presence, the bank maintains an off-shore banking unit in the head office in Colombo, three branches in Malé, Chennai, and Seychelles, and a subsidiary in London.

Bank of Ceylon (BOC) was founded in 1939, with Sir Ernest de Silva as its first chairman. At the time, Ceylon was a British colony and the then governor Sir Andrew Caldecott ceremoniously opened the bank on 1 August. The British government introduced the banking arm for its government-oriented businesses. Two years later, in 1941, BoC started to expand beyond the city of Colombo. It opened its first branch in Kandy. Subsequently, BOC added branches in major cities such as Galle, Jaffna, Kurunegala, Batticaloa, Trincomalee, Badulla, and Panadura.

The free-market economy of Sri Lanka was worth $84 billion by nominal gross domestic product (GDP) in 2019 and $296.959 billion by purchasing power parity (PPP). The country had experienced an annual growth of 6.4 percent from 2003 to 2012, well above its regional peers. This growth was driven by the growth of non-tradable sectors, which the World Bank warned to be both unsustainable and unequitable. Growth has slowed since then. In 2019 with an income per capita of 13,620 PPP Dollars or 3,852 (2019) nominal US dollars, Sri Lanka was re-classified as a lower middle income nation by the World Bank from a previous upper middle income status. 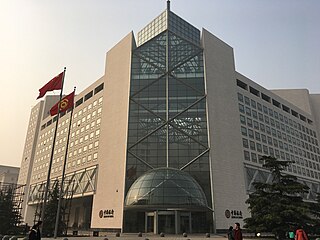 The Bank of China is one of the four biggest state-owned commercial banks in China. Bank of China is legally separate from its subsidiary Bank of China, although they maintain close relations in management and administration and co-operate in several areas including reselling BOC's insurance and securities services.

Bank of Baroda (BOB) is an Indian nationalised banking and financial services company. It is under the ownership of Ministry of Finance, Government of India. It is the fourth largest nationalised bank in India, with 132 million customers, a total business of US$218 billion, and a global presence of 100 overseas offices. Based on 2019 data, it is ranked 1145 on Forbes Global 2000 list.

Indian Bank is an Indian nationalised financial services and banking company. It is under the ownership of the Ministry of Finance of the Government of India, established in 1907 and headquartered in Chennai, India. It serves over 100 million customers with 41,620 employees, 6,004 branches with 5,428 ATMs and Cash deposit machines and is one of the top performing public sector banks in India. Total business of the bank has touched ₹930,000 crore (US$130 billion) as on 31 March 2021. Bank's Information Systems and Security processes certified with ISO27001:2013 standard and is among very few Banks certified worldwide. It has overseas branches in Colombo and Singapore including a Foreign Currency Banking Unit at Colombo and Jaffna. It has 227 Overseas Correspondent banks in 75 countries. Since 1978, the Government of India has owned the bank. As per the announcement made by the Indian Finance Minister Nirmala Sitharaman on 30 August 2019, Allahabad Bank merged from 1 April 2020, making it the seventh largest bank in the country. 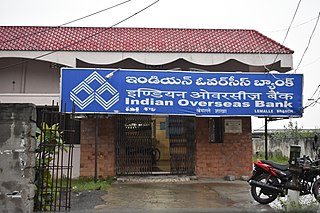 Indian Overseas Bank (IOB) is a major Indian nationalised bank. It is under the ownership of Ministry of Finance, Government of India based in Tamilnadu, India, with about 3,400 domestic branches, about 6 foreign branches and representative office. Founded in February 1937 by Sriman Sridhar with twin objectives of specialising in foreign exchange business and overseas banking, it has created various milestones in Indian Banking Sector. During the nationalisation, IOB was one of the 14 major banks taken over by the government of India. It is one of the two banks recommended for privatization by NITI ayog as per various news reports. As on 31 March 2021, IOB's total business stands at ₹379,885 crore (US$53 billion).

The Central Bank of Sri Lanka (CBSL) is the monetary authority of Sri Lanka. It was established in 1950 under the Monetary Law Act No.58 of 1949 (MLA), it is a semi-autonomous body, and following the amendments to the MLA in December 2002, is governed by a five-member Monetary Board, comprising the Governor as chairman, the Secretary to the Ministry of Finance and Planning, and three members appointed by the President of Sri Lanka, on the recommendation of the Minister of Finance, with the concurrence of the Constitutional Council.

The Colombo Stock Exchange (CSE) is the main stock exchange in Sri Lanka. It is provides an electronic trading platform. The headquarters of the CSE have been located at the World Trade Center (Colombo) Towers in Colombo since 1995 and it also has branches across the country in Kandy, Jaffna, Negombo, Matara, Kurunegala, Anuradhapura and Ratnapura. The Colombo Stock Exchange (CSE) has 296 companies representing 20 business sectors as at 25 January 2021, with a Market Capitalization of Rs. 3,699 Billion.

The Bank of Madras was one of the three Presidency Banks of British India, along with the Bank of Bengal and the Bank of Bombay. It was established on 1 July 1843 through the amalgamation of a number of existing regional banks and headquartered in Madras. It was merged with the other Presidency banks in 1921 to form the Imperial Bank of India, which later became the State Bank of India.

The Asian Clearing Union (ACU), with headquarters in Tehran, Iran, was established on December 9, 1974, at the initiative of the United Nations Economic and Social Commission for Asia and the Pacific (ESCAP). The primary objective of ACU, at the time of its establishment, was to secure regional co-operation as regards the settlement of eligible monetary transactions among the members of the Union to provide a system for clearing payments among the member countries on a multilateral basis. 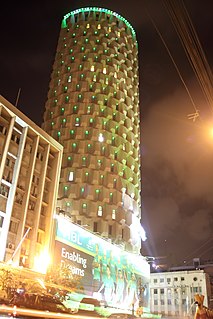 The Bank of Albania is the central bank of Albania. Its main headquarters are in Tirana, and the bank also has five other branches located in Shkodër, Elbasan, Gjirokastër, Korçë, and Lushnjë, while its Research and Training Center is located in Berat. 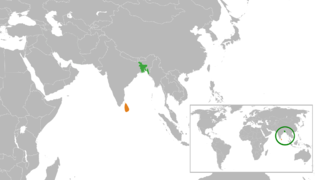 Bangladesh – Sri Lanka relations refers to the bilateral relations between the People's Republic of Bangladesh and the Democratic Socialist Republic of Sri Lanka. Relations have been generally friendly due to trade and investments.

Cargills (Ceylon) PLC is a Sri Lankan Retail, FMCG, Banking and Restaurant company which is listed on the Colombo Stock Exchange. The controlling interest in the company is held by Ceylon Theatres PLC.

The Oriental Bank Corporation, or "OBC", was a British imperial bank founded in India in 1842 which grew to be prominent throughout the Far East. As an Exchange bank, the OBC was primarily concerned with the finance of trade and exchanges of different currencies. It was the first bank in Hong Kong and the first bank to issue banknotes in Hong Kong.

People's Bank is a state-owned commercial bank in Sri Lanka. Second largest commercial bank in Sri Lanka. Established on 1 July 1961, it has its head-offices at Sir Chittampalam A. Gardiner Street in Colombo. The bank offer both retail and corporate banking services, with a network of 739 local branches, service centers and has an asset base of LKR 1.873 trillion (2019) with over 14 million customers. People's Bank received a high national long-Term Rating of AA+ by Fitch Rating. People's bank most awarded state-owned company such as "Green Plus" "Carbon Conscious Award". People's Bank became Sri Lanka's best performing bank. Bank mainly target small and medium enterprise.