The bank was founded in 1920 as a regional bank to serve customers in Kanagawa Prefecture and southwestern Tokyo. It was formed in the wake of the collapse of several existing banks in the region, one of which (Dai-Ni Bank) began operations in 1869 as Yokohama Bank (横浜為替会社), the first modern financial institution in Japan; consequentially, Bank of Yokohama claims to have the longest history of any Japanese bank. [2]

In 2015, Bank of Yokohama announced a merger with the smaller Higashi-Nippon Bank to create Concordia Financial Group, the largest regional bank holding company in Japan. [3] Upon completion of this transaction in March 2016, Bank of Yokohama was de-listed, and Concordia took its place as a constituent of the Nikkei 225 stock market index. [4]

Keikyu Corporation, also known as Keihin Kyūkō (京浜急行) or, more recently, Keikyū (京急), is a private railroad that connects inner Tokyo to Kawasaki, Yokohama, Yokosuka and other points on the Miura Peninsula in Kanagawa Prefecture. It also provides rail access to Haneda Airport in Tokyo. Keihin (京浜) means the Tokyo (東京) - Yokohama (横浜) area. The company's railway origins date back to 1898, but the current company dates to 1948. The railway pioneered Kantō region's first electric train and the nation's third, after Hanshin Electric Railway and Nagoya Electric Railway (Meitetsu) with the opening of a short 2 km long section of what later became the Daishi Line in January 1899. 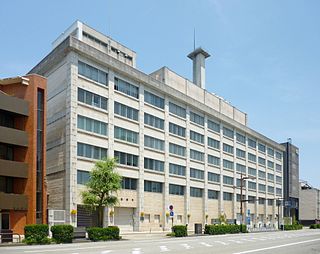 The Hokuriku Bank, Ltd. is a Japanese regional bank headquartered in Toyama, Toyama; Hokoriku refers to a greater region in Japan that encompasses Fukui, Ishikawa, and Toyoma prefectures. In addition to the Hokuriku region, the bank has branches in Kyoto, Osaka, Niigata, Nagano, Tokyo, Kanagawa, Gifu, Aichi, and Hokkaidō. The bank also operates overseas representative offices in Shanghai, Singapore, and New York City. 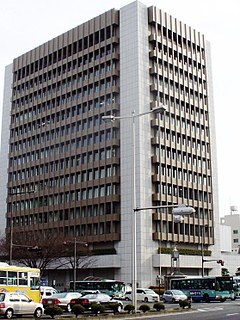 The 77 Bank, Ltd. is a Japanese regional bank headquartered in Sendai, Miyagi Prefecture. As the designated financial institution of the prefecture, the city, and many other cities and towns throughout the prefecture, it performs duties such as holding deposits for public money and handling payments. It is also the biggest regional bank in the Tōhoku region.

The Bank of Iwate, Limited is a Japanese regional bank that is based out of Morioka, the capital of Iwate prefecture in the Tohoku region. The Morioka branch building, the site of the old Morioka Bank, is a historic landmark in the prefecture. The bank has branches in Sendai and Hachinohe; unfavorable business conditions forced the bank to close a branch in Sapporo.

The Aomori Bank, Ltd. is a Japanese regional bank headquartered in Aomori, Aomori Prefecture, in the Tōhoku region of northern Honshū. The Aomori Bank provides financial services for individual and corporate customers, including deposits, loans, securities trading and investment, foreign exchange, and bond underwriting and registration services as well as credit card services.

The Yokohama Line(Japanese: 横浜線, Japanese pronunciation: [Yokohama-sen]) is a Japanese railway line of the East Japan Railway Company connecting Higashi-Kanagawa Station in Yokohama, Kanagawa and Hachiōji Station in Hachiōji, Tokyo. The line forms part of what JR East refers to as the "Tokyo Mega Loop"(Japanese: 東京メガループ) around Tokyo, consisting of the Keiyo Line, Musashino Line, Nambu Line, and Yokohama Line. The line's name comes from the section between Nagatsuta and Higashi-Kanagawa that runs through the city of Yokohama. Nicknamed the Hama-sen (浜線) by locals, the line serves commuters in the southwestern suburbs of Tokyo and northeastern suburbs of Yokohama.

The Nanto Bank, Ltd. is a regional bank that mainly operates in Nara Prefecture, Japan. The bank, established in June 1934, has 136 domestic branches in Nara, Osaka, Kyoto, Hyogo, Mie, Wakayama, and Tokyo as well as representative offices in Hong Kong and Shanghai, China. 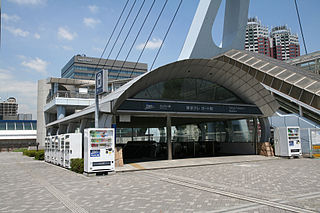 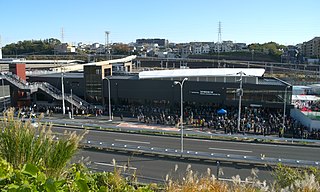 Hazawa yokohama-kokudai Station is a railway station on the Sōtetsu Shin-Yokohama Line and Tōkaidō Freight Line. It is located in Kanagawa-ku, Yokohama, Kanagawa Prefecture. This station is jointly operated by Sōtetsu, with station number SO51, and JR East.

The F Liner(Japanese: Fライナー) is the name for the fastest through service train among five railway companies: the Tobu Railway, Seibu Railway, Tokyo Metro, Tokyu Corporation and Yokohama Minatomirai Railway.