Barbara Frum, OC (September 8, 1937 – March 26, 1992) was a US-born Canadian radio and television journalist, acclaimed for her interviews for the Canadian Broadcasting Corporation.

Barbara Frum was born Barbara Rosberg in Niagara Falls, New York, the oldest of three children of Harold Rosberg and Florence Hirschowitz Rosberg. Her family is Jewish. Frum's father, who was born in Kielce, Poland, immigrated to Canada as a child with his parents in 1913, and was the proprietor of Rosberg's Department Store in Niagara Falls, Ontario. Frum's mother was born in New York City, and moved to Canada in 1935, the year she got married. Frum grew up in Niagara Falls, Ontario. She studied history at the University of Toronto, where she graduated with a BA in 1959. In 1957, she married Toronto dentist Murray Frum, who later became a real-estate developer. [1] They had two children and adopted a third, an aboriginal child, Matthew. [2] Her daughter, Linda Frum, is a Canadian senator and a member of the Canada-Israel Committee, and her son, David Frum became a political journalist and, after he moved to the United States, was a speechwriter for George W. Bush. [1]

After her graduation, Frum undertook volunteer work in the community and began writing for the Toronto Star as a freelancer, specializing in social-issues stories. [1] In 1971, she joined CBC Radio as one of the first hosts of As It Happens , a newsmagazine program which used the telephone to conduct live interviews with newsmakers and other witnesses to news events, as well as quirky human-interest stories. Frum's skills as a tough, incisive and well-informed interviewer [3] quickly made the program one of CBC Radio's most popular and enduring programs (it still airs today, in virtually the same format), and she continued to host until 1981.

Between October 1974 and July 1975, she hosted her own self-titled talk show, first locally broadcast in Toronto until May 1975 before the program moved to the national CBC network for seven shows in June and July 1975. [4] The shows featured both interviews with personalities and special segments devoted to isolated topics. [5]

In 1981, CBC Television created The Journal , a newsmagazine series which would follow The National each night at 10:22 p.m., and Frum and Mary Lou Finlay were hired as the show's hosts. On January 11, 1982, The Journal debuted as a showcase for features which delved more deeply into the day's news than the traditional newscast format of The National. [6]

The show included field reports, short documentaries, public forums, debates, business, sports, and arts and science news, but Frum's interviews were the show's centrepiece, and made it one of Canadian television's most popular programs. After the first year, Frum became the sole host of the program, although Finlay continued to be associated with the program as a reporter and documentarian. Frum interviewed many notable people, including British Prime Minister Margaret Thatcher [7] and Nelson Mandela. [8]

She angered many when, on December 7, 1989 on The Journal, [9] she refused to acknowledge that the École Polytechnique massacre, by a killer who proclaimed as he shot and stabbed women, "I hate feminists!" was an attack on women and feminism, saying: "Why do we diminish it by suggesting that it was an act against just one group?"

Frum was frequently parodied on CODCO by Greg Malone, whose portrayal involved the recurring catchphrase "But are you bitter?" Frum and Malone (in his Frum drag) also presented a Gemini Award together.

Frum was also the inspiration for the muppet "Barbara Plum", host of "The Notebook", on Canadian Sesame Street (later reworked as Sesame Park ). In the Canadian animated series The Raccoons , Frum herself portrayed a reporter called "Barbara LaFrum", who interviewed Cyril Sneer after his pigs told her of his unsavoury business practices.

Frum received four Alliance of Canadian Cinema, Television and Radio Artists (ACTRA) Awards, [10] won the National Press Club of Canada Award for Outstanding Contribution to Canadian Journalism in 1975, and was named to the Order of Canada in 1979. [3] A library in Toronto, called the Barbara Frum Public Library, is dedicated to her.

Frum died of chronic leukemia on March 26, 1992. Her illness had been first diagnosed in 1974, but only a small circle of family and friends knew about it. [11] On the evening of her death, virtually the entire broadcasts of both The National and The Journal were a tribute to her and a retrospective of her career. Among the many tributes was an editorial cartoon depicting her at the gates of Heaven with a reporter's notebook, insisting on interviewing God. Several other editorial cartoons simply depicted The Journal's set with an empty anchor chair.

Following Frum's death, The National and The Journal were merged into a new program called Prime Time News .

The atrium in the CBC's Canadian Broadcasting Centre in Toronto, which opened in 1993, is named "Barbara Frum Atrium" in her honour. [12]

The Toronto Public Library branch located at 20 Covington Rd was named in her honour [13] and opened shortly after her death. The building of the library was donated by Murray Frum as part of a redevelopment project, [14] Frum was in the foreground on the Canadian stamp honouring CBC in 1999, [10] a television biography, The Life and Times of Barbara Frum, was broadcast on CBC in 2002, [11] and a day lily has been named the "Barbara Frum Day Lily" in recognition of her enthusiasm for gardening. [1]

Frum's daughter Linda, a conservative author and journalist, wrote a best-selling biography of her mother in 1996. She was appointed to the Senate of Canada as a Conservative by Prime Minister Stephen Harper in August 2009. [15] Frum's son, David, is a political journalist and author of several books. He collaborated with others in coining the phrase "Axis of Evil" while a speechwriter for George W. Bush. [14] Frum's adopted son Matthew, a First Nations child whom the Frums adopted in the 1960s during the so-called Sixties Scoop, had problems as a teenager, and ultimately reclaimed his aboriginal roots and renewed contact with his birth parents. [2]

As It Happens is a Canadian interview show that airs on CBC Radio One in Canada and various public radio stations in the United States through Public Radio International. Its 50th anniversary was celebrated on-air on November 16, 2018. It has been one of the most popular and acclaimed shows on CBC Radio.

The National is a Canadian national television news program which serves as the flagship broadcast for the English-language news division of the Canadian Broadcasting Corporation. It reports on major Canadian and international news stories, airing on CBC Television stations nationwide weeknights and Sundays at 10:00 p.m. local time. Since September 2007, The National has been aired in HDTV, the first Canadian national newscast to do so.

The Journal was a current affairs newsmagazine television program broadcast on CBC Television from 1982 to 1992. It aired weeknights at 10:22 pm, following The National at 10 pm, and expanding on stories presented on there with in-depth interviews, documentaries, and televised "town hall" meetings. The division of the 10:00 hour into two entirely separate programs, and the length of each, reflect the separation and political tension between the CBC's then-separate news and public affairs production units.

Julia Verlyn LaMarsh, was a Canadian politician, lawyer, author and broadcaster. In 1963, she was only the second woman to ever serve as a federal Cabinet Minister. Under Prime Minister Lester Pearson's minority governments of the middle and late 1960s, she helped push through the legislation that created the Canada Pension Plan and Medicare. As Secretary of State, she was in charge of Canada's Centennial celebrations in 1967. After leaving politics in 1968, she wrote three books, and had her own radio show on CBC Radio. She was stricken with pancreatic cancer in 1979 and was given the Order of Canada at her hospital bed. She died a few days short of the 20th anniversary of her first political election victory, in 1980.

Pamela Wallin, is a Canadian senator, former television journalist, and diplomat. She was appointed to the senate on January 2, 2009, where she initially sat as a Conservative.

Hana Gartner is a retired Canadian investigative journalist, best known as the host/interviewer of several programs for the Canadian Broadcasting Corporation.

Shelagh Rogers, OC, is a Canadian broadcast journalist based in British Columbia. She is the host and producer of CBC Radio One's The Next Chapter, and chancellor of the University of Victoria.

The Canadian Broadcasting Centre, also known as the CBC Toronto Broadcast Centre, is an office and studio complex in Toronto that serves as the broadcast headquarters and master control point for the Canadian Broadcasting Corporation's English-language television and radio services. It also contains studios for local and regional French language productions and is the headquarters of the North American Broadcasters Association. The master control point for CBC's French language services is the Maison Radio-Canada, located in Montreal.

Barbara Budd is a Canadian actress, narrator and radio announcer. Between 1993 and April 30, 2010, she was the co-host of CBC Radio One's As It Happens.

Tina Srebotnjak is a Canadian radio and television journalist.

Elizabeth Gray is a Canadian radio broadcaster, who has been a host and documentary producer for CBC Radio.

The Royal Canadian Air Farce is a comedy troupe that was active from 1973 to 2019 and is best known for their various Canadian Broadcasting Corporation series, first on CBC Radio and later on CBC Television. Although their weekly radio series ended in 1997 and their television series ended in 2008, the troupe remained active until 2019, with annual New Year's Eve specials on CBC Television. CBC announced that, due to budgetary constraints, the special scheduled to air on December 30, 2019 would be the final in the series.

Chuck McCoy is a Canadian radio executive. His career began in the 1960s and continued into the 1970s as an announcer and disc jockey in several radio stations throughout Canada. He then became a program director, started a consulting firm, and is now an executive for Rogers Broadcasting. In 2008 he was inducted into the Canadian Music Industry Hall of Fame.

Mary Evelyn Grannan was a Canadian children's writer and radio personality. She wrote and performed in programs for children on CBC radio and CBC television between 1938 and 1962. Stories broadcast on her radio and television programs Just Mary and Maggie Muggins were published in a series of popular books.

Claire Wallace was a pioneering Canadian journalist, broadcaster and author. Wallace was the first woman broadcaster to learn how to fly a plane, and one of Canada's first regular female radio stars. After first becoming a regular columnist for the Toronto Star in the 1930s, Wallace turned to radio broadcasting, hosting programs for CFRB and the Canadian Broadcasting Corporation (CBC). From 1942 until 1952, she hosted CBC's They Tell Me, which eventually peaked in popularity as the second highest-rated radio program in the country. She was known for her daring stories and reporting style, which included joining a deep-sea diving expedition, climbing a Mexican volcano, and broadcasting from 5,000 feet (1,500 m) above Niagara Falls.

Murray Frum was a Canadian real estate developer and philanthropist. 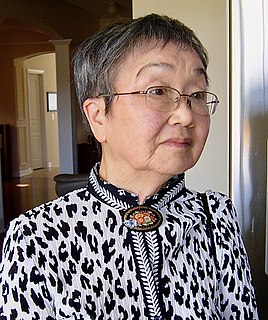 Keiko Margaret Lyons, was the first female vice president of the Canadian Broadcasting Corporation (CBC). She is known for her role in the CBC's "Radio Revolution", a populist revamp of the CBC Radio network which resulted in programs such as Quirks and Quarks and As It Happens. Lyons was designated a Member of the Order of Canada in 2010 for her work in broadcasting.