Barbara Louise Mertz (September 29, 1927 – August 8, 2013) was an American author who wrote under her own name as well as under the pseudonyms Elizabeth Peters and Barbara Michaels. In 1952, she received a PhD in Egyptology from the University of Chicago. While she was best known for her mystery and suspense novels, in the 1960s she authored two books on ancient Egypt, both of which have remained in print ever since.

Barbara Gross was born on September 29, 1927, in Canton, Illinois. [1] She graduated from the University of Chicago with a bachelor's degree in 1947, a master's degree in 1950, and a PhD in Egyptology in 1952, [2] having studied with John A. Wilson. [3] She authored two books on ancient Egypt (both of which have been continuously in print since first publication), but primarily wrote mystery and suspense novels. She became a published writer in 1964. She was married to Richard Mertz for 19 years (1950-1969) which ended in divorce. [4] They had two children, Peter and Elizabeth Mertz. [5]

Under the name Barbara Michaels, she wrote primarily gothic and supernatural thrillers. Her publisher chose that pseudonym since Mertz had already published one non-fiction book on ancient Egypt, and the publisher did not want Mertz's novels to be confused with her academic work. Under the pseudonym Elizabeth Peters, Mertz published mysteries, including her Amelia Peabody historical mystery series, using a nom de plume drawn from the names of her two children.

She was member of the Editorial Advisory Board of KMT , ("A Modern Journal of Ancient Egypt"), Egypt Exploration Society, and the James Henry Breasted Circle of the University of Chicago Oriental Institute. [6]

Mertz was also a feminist, a topic that frequently arose in her fiction, and in her professional life. Mertz founded "Malice Domestic", a Washington-based organization for women mystery writers, "because she thought men were getting all the prizes." [7] She also started a scholarship for women writers at Hood College. [8]

Mertz received a number of award wins and nominations from the mystery community. Her first recognition came when Trojan Gold was nominated for the 1988 Anthony Award in the "Best Novel" category; [10] the following year, Naked Once More won the 1989 Agatha Award in the same category. [11] Following this Mertz earned a series of Agatha Award "Best Novel" nominations, including The Last Camel Died at Noon in 1991; The Snake, the Crocodile, and the Dog in 1992; Night Train to Memphis in 1994; Seeing a Large Cat in 1997; The Ape Who Guards the Balance in 1998; and He Shall Thunder in the Sky in 2000 which also received an Anthony Award "Best Novel" nomination in 2001. [10] [11] Mertz received a final Agatha Award nomination for "Best Novel" in 2002 for The Golden One and won the "Best Non-fiction Work" the following year for Amelia Peabody's Egypt: A Compendium , which also received an Edgar Award nomination in 2004 in the "Best Critical / Biographical Work" category. [11] [12]

Mertz was also the recipient of a number of grandmaster and lifetime achievement awards, including being named Grandmaster at the Anthony Awards in 1986 and Grandmaster by the Mystery Writers of America in 1998; in 2003, she received a Lifetime Achievement Award at the Malice Domestic Convention. [13] In 2012 she was honored with the first Amelia Peabody Award at the Malice Domestic Convention; the award was named after the leading character in her long-running series. [14]

This series contains 20 books; the most recent and last, The Painted Queen , was published in July 2017. The heroine is an Egyptologist and is married, with one child of her body, Walter, nicknamed and popularly known as Ramses, and two others of her heart: Nefret Forth (3 years older than Ramses) and Sennia (ca. 25 years younger). The stories all relate to the "Golden Age" of Egyptology and nearly all are set in Egypt, with the excavations providing the backdrop for the mystery/adventure plots.

The timeline begins in the 1880s with Amelia's decision to see the world as an unexpectedly-wealthy, feminist spinster, and ends with the discovery of Tutankhamun's tomb in late 1922. (Peters had planned additional books in the series to "fill in the blanks" in the chronology, as she did with River: set in 1910, though it was written after other books that are set later.)

The Vicky Bliss novels follow the adventures of an American professor of art history, who keeps getting involved in international crime, and her love interest, a charming art thief known as Sir John Smythe. [16] Another Peters novel, The Camelot Caper (1969) (also published as Her Cousin John), while not technically a Vicky Bliss story, features Smythe. The novels can be enjoyed in any order, but the stories are highly sequential in nature and are probably better appreciated if read in order of publication.

This series and the Amelia Peabody series are slightly related: a fictional tomb discovered by Amelia Peabody and her husband plays an important role in Night Train to Memphis, and in The Laughter of Dead Kings it is revealed that John Smythe is related to the Emersons.

In this series, Jacqueline Kirby is a middle-aged librarian with a very large purse and a knack for solving mysteries. Initially an unwilling detective, and not the apparent protagonist, in the first book (The Seventh Sinner), Kirby's quirkiness and middle-aged romantic success generated a following and lead to sequels. The series continued with The Murders of Richard III and Die For Love, each of which featured Jacqueline Kirby plumbing a mystery arising out of a subculture (Ricardians and romance novelists). In Die for Love, Kirby began writing a romance novel, and in Naked Once More, the fourth and final book of the series, has proven to be quite successful in that career. In Naked Once More, Jacqueline is commissioned to write a sequel to a "famous" prehistoric romance novel, whose author died under mysterious circumstances. In each of the books, Kirby solves a mystery, attracts one or more suitors, but remains alluringly aloof and independent.

Someone in the House series 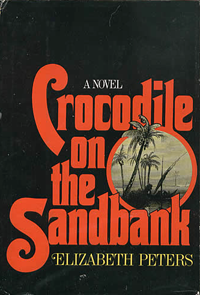 Crocodile on the Sandbank is a historical mystery novel by Elizabeth Peters, first published in 1975. It is the first in the Amelia Peabody series of novels and takes place in 1884-1885.

Deeds of the Disturber is the fifth in a series of historical mystery novels, written by Elizabeth Peters and featuring fictional sleuth and archaeologist Amelia Peabody. This is the only book in the series which takes place entirely in England.

The Last Camel Died at Noon is the sixth in a series of historical mystery novels, written by Elizabeth Peters and featuring fictional sleuth and archaeologist Amelia Peabody. Although most of the Amelia Peabody series are fairly "hardboiled" historical detective stories, Last Camel is an exception and satirizes adventure novels in the tradition of Henry Rider Haggard. The title of this book is identical to the first sentence of the 1981 thriller The Key to Rebecca by Ken Follett. The Last Camel Died at Noon most closely follows the tradition with plot elements like a lost and ancient civilization, a young English girl serving as its high priestess, an evil prince, a wronged noble prince who wants to free the slaves, kidnappings, escapes, mazes of tunnels hand-carved from cliffs. 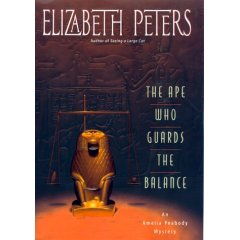 The Ape Who Guards the Balance is the tenth in a series of historical mystery novels, written by Elizabeth Peters and featuring fictional sleuth and archaeologist Amelia Peabody.

The Snake, the Crocodile, and the Dog is the seventh in a series of historical mystery novels, written by Elizabeth Peters and featuring fictional archaeologist and sleuth Amelia Peabody.

Seeing a Large Cat is the ninth novel in the Amelia Peabody historical mystery series by Elizabeth Peters. The story takes place during the season of 1903-1904.

He Shall Thunder in the Sky (2000) is the 12th in a series of historical mystery novels by Elizabeth Peters, featuring fictional archaeologist and sleuth Amelia Peabody. 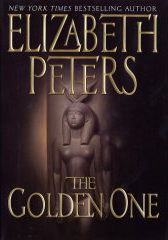 The Golden One is the 14th in a series of historical mystery novels, written by Elizabeth Peters and featuring fictional sleuth and archaeologist Amelia Peabody. 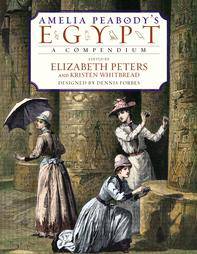 Amelia Peabody's Egypt : A Compendium is a 2003 non-fiction book, edited by Elizabeth Peters and Kristen Whitbread.

The Amelia Peabody series is a series of twenty historical mystery novels and one non-fiction companion volume written by Egyptologist Barbara Mertz (1927-2013) under the pen name Elizabeth Peters. The series is centered on the adventures of the unconventional female Egyptologist Amelia Peabody Emerson, for whom the series is named, and an ever-increasing number of family, friends, allies, and characters both fictional and based on historical figures. The novels blend mystery and romance with a wryly comic tone, and at times also parody Victorian-era adventure novels such as those written by H. Rider Haggard. The series was published between 1975 and 2010, with the final, posthumous novel appearing in 2017.

Joan Hess was an American mystery writer, a member of Sisters in Crime, and a former president of the American Crime Writers League. She wrote two popular mystery series: The Claire Malloy Mysteries and The Maggody Mysteries, and has contributed to multiple anthologies and book series, including: Crosswinds, Deadly Allies, Malice Domestic, Sisters in Crime, and The Year's 25 Finest Crime and Mystery Stories. She also wrote the Theo Bloomer mystery series, under the pseudonym Joan Hadley.