Barbara Neely was born in Pittsburgh, Pennsylvania, in 1941, [4] was the oldest of three children born to Ann and Bernard Neely who lived in a rural Pennsylvania Dutch community in Lebanon, Pennsylvania. [5] [6]

She attended a Roman Catholic elementary school and was the only child in her class of Pennsylvania German dialect (popularly known as Pennsylvania Dutch) students to speak English fluently and was the only student of African-American descent to attend her elementary and high school. In 1971, she moved to Pittsburgh, Pennsylvania, where she was awarded a master's degree in Urban and Regional Planning from the University of Pittsburgh. [5] [6]

After earning her degree, she became thoroughly involved in local activism and created a community-based housing program for female felons in an area of Pittsburgh called Shady Side. The program was developed through her position with Pennsylvania's Department of Corrections and was the state's first community based correctional center for women. [5] [7]

During a trip to San Francisco in 1978, Neely witnessed a woman dancing in front of a band which she says inspired her to take her work in activism even farther. Neely stated, "she [the dancing woman] started pointing to people, and when she turned and pointed to me, it seemed to me that she was saying, 'Do it today, because today is all you have.'" [8] Soon after, Neely had her first piece of fiction, a short story called "Passing the Word", published in Essence magazine. Neely moved to North Carolina and began writing for Southern Exposure as well as producing various shows for the African News Service. [8] Her involvement in activism continued with becoming director of a YWCA branch, Family Services Coordinator for ABCD Head Start, executive director of Women for Economic Justice, cofounder (with Loretta Ross, and others) of Women of Color for Reproductive Freedom, [9] and host of Commonwealth Journal on Boston Radio. [10] She was also part of an evaluative research team at the Institute for Social Research. [5]

Neely published her first short story, "Passing the Word" (1981), in the magazine Essence . Her Blanche White novels followed a decade later, beginning with Blanche on the Lam [11] (1992), followed by Blanche Among the Talented Tenth [12] (1994), Blanche Cleans Up [13] (1998), and Blanche Passes Go [14] (2000). Most notable about Neely's heroine Blanche is both her physical appearance as well as her occupation; she is a heavy-set, dark-skinned Black woman who works as a maid. Blanche is proud of her work and does not let it get in the way of her independence and proud personality. This immediately sets her apart from the typical protagonist. Other notable characteristics of Blanche are her curiosity, and her ability to piece together clues in order to figure out mysteries. [8]

Neely enjoyed a wide range of authors, such as P. D. James, Chester Himes, and Walter Mosley, but the one author that inspired her the most was Toni Morrison. Neely used her as a model of what she wanted to become. She saw what Morrison did with the experiences of black woman to tell stories of ordinary people and tried to mimic the same style.[ citation needed ] At first it was a short story but her editor told her it should be a longer piece of work. The stories of Blanche White contain themes and issues that go beyond mystery and into political and social commentary. Blanche allows Neely to explore the female beauty. There are other issues that Neely is able to tackle through her writing – such as violence against women, racism, class boundaries, and sexism. Barbara Neely is quoted as saying, "That as a feminist mystery writer it is not enough to create strong women, and that maybe the term 'feminist mystery writer' is being used too loosely." [8]

With her character of Blanche, Neely wanted to be able to write something about race and class that was funny. Blanche and her charming personality, along with Neely's messages, are at the center of her mystery novels' plot lines. According to Rosemary Hathaway, Neely creates Blanche's character to not only take on the issues raised, but to also be the issues. Neely gives Blanche a double-consciousness and when thrown into tough situations, "Blanche's detective work enacts more of a triple - or even a quadruple-consciousness". [17]

Neely's work reinforces her beliefs about race and class in America. As Ann Collette explains, "the keep-it real ethic of Neely's writing is a natural outgrowth of the author's down-to-earth nature and her fierce commitment to political activism, her profession before she turned to writing full-time". [17]

For Blanche on the Lam, Neely received an Agatha Award for best first novel (1992); [18] an Anthony Award for first best novel (1993); [19] the Go on Girl! Award from the Black Women's Reading Club for the best début novel; [20] and a Macavity Award for first best mystery novel (1993). [21] Neely also won two awards for her activism. They include "Community Works Social Action Award for Leadership and Activism for Women's Rights and Economic Justice"[ clarification needed ] and "Fighting for Women's Voices Award" from the Coalition for Basic Human Needs.[ clarification needed ] [6]

In December 2019, the Mystery Writers of America named her their 2020 Grand Master winner. [3] 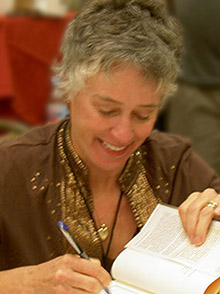 Harley Jane Kozak is an American actress and author. She made her film debut in the slasher film The House on Sorority Row (1982), and had a recurring role as Mary Duvall on the soap opera Santa Barbara between 1985 and 1989. She later had supporting parts in Clean and Sober (1988) and When Harry Met Sally... (1989), before starring in the major studio films Parenthood (1989) and Arachnophobia (1990).

Blanche on the Lam is a mystery novel by author Barbara Neely, the first in a series by her. This novel brings to light the intelligence and power of an African-American domestic female worker in the midst of a racist and sexist society. The book won the Agatha Award and the Anthony Award for Best First Novel, and the Macavity Award for Best First Mystery. The series continues with Blanche among the Talented Tenth (1994), Blanche Cleans Up (1998), and Blanche Passes Go (2000).

Bouchercon is an annual convention of creators and devotees of mystery and detective fiction. It is named in honour of writer, reviewer, and editor Anthony Boucher; also the inspiration for the Anthony Awards, which have been issued at the convention since 1986. This page details Bouchercon XXIV and the 8th Anthony Awards ceremony.