Barbora Špotáková (Czech pronunciation: [ˈbarbora ˈʃpotaːkovaː] ; born 30 June 1981) is a Czech track and field athlete who competes in the javelin throw. She is a two-time Olympic Champion and three-time World Champion, as well as the current world record holder with a throw of 72.28 m.

Špotáková was an All-American during her one season at the University of Minnesota in 2001-02 [2] [3] and won the silver medal at the 2006 European Championships in Gothenburg.

Špotáková improved the Czech national record (previously 66.21 m held by herself since 2006) twice in the final of the 2007 World Championships in Osaka. She took an early lead for 66.40 m in the first attempt and secured the gold medal in the third attempt (67.07 m) before German Christina Obergföll (66.46 m). Špotáková became the seventh woman in the world to reach the 67 m mark. More importantly, she became the Olympic winner in 2008 with her last throw, 71.42 m, which then was the new European record.

At the 2008 IAAF World Athletics Final on 13 September 2008, Špotáková broke the world record in the first round to win the competition with a throw of 72.28 m.

Špotáková was a heptathlete in her early career, finishing fourth at the 2000 World Junior Championships. Špotáková also won the International Combined Events Meeting in Hexham in 2000 before she went on to study in the USA and specialise in Javelin throwing. She is currently a member of the elite ASO (Armádní sportovní oddíl, Army Sport Group) of Dukla Prague. Until the end of the 2010 season she was coached by Rudolf Černý, who led her from a national elite level heptathlete to the World Record in the Women's Javelin. Prior to the 2011 season it was announced that Jan Železný would take over as her coach. [4] At the end of 2010 she won the Czech federation's annual poll for "Athlete of the year" for the fourth year in a row. [4] Then she won it again in 2011, making it five years in a row. Barbora Špotáková is consecutive winner of 2008 Beijing Olympics and 2012 London Olympics.

Špotáková gave birth to a son Janek in May 2013 and did not compete at the world championships in Moscow later that year. [5]

In 2014, Špotáková finally captured the one major title to have eluded her, winning the European Championships in Zürich, Switzerland with a throw of 64.41 m. [6]

Špotáková reunited with her former coach Rudolf Černý in 2015 to train for The Olympic Games in Rio de Janeiro in 2016, where she won the bronze medal with a throw of 64.80m.

Špotáková is a fan of Czech rock band "Tři Sestry" (Three Sisters). Before the Olympic Games in 2008, their leader Lou Fanánek Hagen announced that if she wins the gold medal, the band will record a song in her honor. After she had indeed won the Olympics, Tři Sestry recorded a song called "Čtvrtá sestra" (The fourth sister) celebrating her triumph.

Jan Železný is a retired Czech track and field athlete who competed in the javelin throw. He was a World and Olympic Champion and holds the world record with a throw of 98.48 m. Widely considered to be the greatest javelin thrower of the modern era, he also has the second, third and fourth best performances of all time.

Osleidys Menéndez Sáez is a retired Cuban track and field athlete who competed in the javelin throw. She was a World and Olympic Champion, and held the world record from 2001 to 2008. Her personal best of 71.70 m remains the North, Central American and Caribbean record and ranks her third on the overall list.

Christina Obergföll is a retired German track and field athlete who competed in the javelin throw. She was World Champion in 2013. Her personal best throw of 70.20 m is the German record. It also ranks her fourth on the overall list. 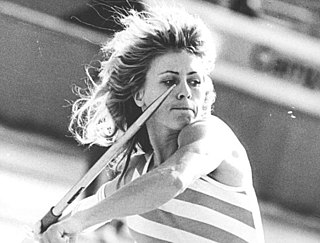 Petra Meier is a retired German track and field athlete who competed in the javelin throw. Representing East Germany, she became the Olympic Champion in 1988 and broke the world record four times between 1985 and 1988. She is the only woman to throw a javelin 80 metres or more, with her world record of 80.00 m. This throw was the world record from 1988 until 1999, when a new javelin design was implemented. She also won the javelin title at the 1989 IAAF World Cup and silver medals at the World Championships in 1987 and 1991.

Remigija Nazarovienė is a retired Lithuanian heptathlete. She won the bronze medal at the 1997 World Championships and finished third at the 1998 IAAF World Combined Events Challenge. She won the Talence Decastar twice, in 1996 and 1997, and was runner-up in 1989 and 1998. She competed four times at the Olympic Games. She holds the Lithuanian national record in heptathlon with 6604 points, and also held national records in the 100m and 60m hurdles.

Katherine Dinah "Goldie" Sayers, is a former British javelin thrower. She was born in Newmarket, Suffolk, United Kingdom. On 20 May 2007, Sayers set a new British record in the javelin at 65.05 m, thus becoming the first British woman to throw over 65 metres since javelins were redesigned in 1999. Sayers set the record when competing for her university, Loughborough, at the Loughborough International match. She cemented this achievement at the Norwich Union Glasgow Grand Prix on 3 June 2007 where she beat a top-class international field in rainy conditions with a throw of 63.59 m. Defeated rivals included European champion and Olympic silver medallist Steffi Nerius and world champion Barbora Špotáková.

The women's javelin throw at the 2008 Summer Olympics took place on 19–21 August at the Beijing National Stadium.

The Czech Republic will compete at the 2009 World Championships in Athletics from 15–23 August. A team of 22 athletes was announced in preparation for the competition. Selected athletes have achieved one of the competition's qualifying standards. Decathlete Roman Šebrle and javelin thrower Barbora Špotáková enter the competition as the reigning champions and current world record holders.

The Women's Javelin Throw at the 2009 World Championships in Athletics will be held at the Olympic Stadium on August 16 and August 18. The event featured four athletes whose ability was so much better than the opposition that Mirko Jalava of the IAAF said it would be a "major surprise" should another athlete beat them to the podium.

Czech Republic competed at the 2012 Summer Olympics in London, United Kingdom, from 27 July to 12 August 2012. This was the nation's fifth appearance at the Summer Olympics after gaining its independence from the former Czechoslovakia. The Czech Olympic Committee sent a total of 133 athletes to the Games, 68 men and 65 women, to compete in 19 sports.

The Women's javelin throw competition at the 2012 Summer Olympics in London, United Kingdom. The event was held at the Olympic Stadium on 7–9 August. Each athlete receives three throws in the qualifying round. All who achieve the qualifying distance progress to the final. If less than twelve athletes achieve this mark, then the twelve furthest throwing athletes reach the final. Each finalist is allowed three throws in last round, with the top eight athletes after that point being given three further attempts. 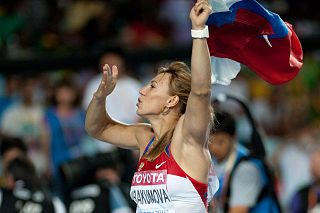 The Women's javelin throw event at the 2011 World Championships in Athletics was held at the Daegu Stadium on September 1 and 2.

Marharyta Serhiïvna Dorozhon is an Israeli javelin thrower. Born and raised in Ukraine, she competed for that country until she became an Israeli citizen in 2014.

The women's javelin throw competition at the 2016 Summer Olympics in Rio de Janeiro, Brazil was held at the Olympic Stadium on 16–18 August. Each athlete received three throws in the qualifying round. All who achieved the qualifying distance progressed to the final. Each finalist was allowed three throws in last round, with the top eight athletes after that point being given three further attempts.

The women's javelin throw at the 2017 World Championships in Athletics was held at the Olympic Stadium on 6 and 8 August.

The women's javelin throw at the 2019 World Athletics Championships was held at the Khalifa International Stadium in Doha, Qatar, on 30 September and 1 October 2019.