Barefoot skiing is water skiing behind a motorboat without the use of water skis, commonly referred to as "barefooting". Barefooting requires the skier to travel at higher speeds (30-45mph/50-70km/h) than conventional water skiing (20-35mph). The necessary speed required to keep the skier upright varies by the weight of the barefooter and can be approximated by the following formula: (W / 10) + 20, where W is the skier's weight in pounds and the result is in miles per hour. It is an act performed in show skiing, and on its own.

Barefoot water skiing originated in Winter Haven, Florida. According to the Water Ski Hall of Fame, and witnesses of the event, 17-year-old A.G. Hancock became the first person ever to barefoot water ski in 1947. That same year, Richard Downing "Dick" Pope Jr., was the first person ever to be photographed barefooting, stepping off his skis on a training boom alongside the boat. In 1950, the first barefoot competition was held in Cypress Gardens, with Pope and Mexican competitor Emilio Zamudio as the only two known barefooters in the world at the time. [1] The first woman to waterski barefoot was Charlene Zint in 1951. [2]

Throughout the 1950s, additional barefoot starting techniques were invented including the two-ski jump out, the beach start (invented by Ken Tibado in 1955), and the deep water start (invented by Joe Cash in 1958). The tumble-turn maneuver was 'invented' by accident during a double barefoot routine in 1960 when Terry Vance fell onto his back during a step-off and partner Don Thomson (still on his skis) spun him around forward, enabling Vance to regain a standing posture. In 1961, Randy Rabe became the first backward barefooter by stepping off a trick ski backwards, a maneuver Dick Pope had first tried in 1950 but vowed never to try again after a painful fall. The early 1960s saw Don Thomson appear as the first "superstar" of the sport, developing both back-to-front and front-to-back turnarounds, and performing the first barefoot tandem ride in a show at Cypress Gardens. [3]

During this time barefooting began developing in Australia as well. In April 1963, the first national competition was held in Australia, with 38 competitors. [4] The Australians were the first to develop barefoot jumping, one of the three events in modern barefoot competition, as well as pioneer many new tricks. In November 1978, the first world championships were held in Canberra, Australia, where 54 skiers competed for a total of 10 different countries. [4] Australians Brett Wing and Colleen Wilkinson captured the men's and women's titles. In 1976 Briton Keith Donnelly set the first (officially recognized) World Barefoot Jump record of 13.25 meters.

Barefoot water skiing has a competitive aspect which is very established. In traditional competition, there are three events:

In the Boy's division Jackson Gerard set a record of 12.850 points on July 28, 2018. It also counted as the Men's Open record until broken two weeks later by World Barefoot Center teammate David Small.

Ashleigh Stebbeings set the Women's Open division world record on October 8, 2014 with a score of 17.2 points.

Some other barefoot competitions feature endurance events. These include:

The newest form of Barefoot competition is an event which brings together all three events Tricks, Slalom and Jump into a single set. 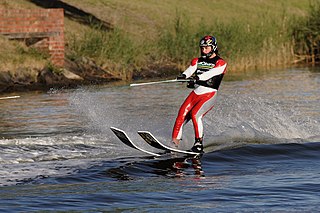 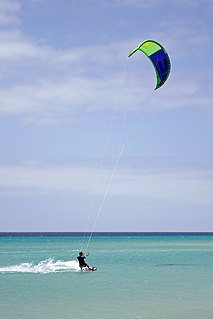 Riverboarding is a boardsport in which the participant lies prone on their board with fins on their feet for propulsion and steering. This sport is also known as hydrospeed in Europe and as riverboarding or white-water sledging in New Zealand, depending on the type of board used. Riverboarding includes commercial, recreational and the swiftwater rescue practice of using a high-flotation riverboard, designed for buoyancy in highly aerated water.

Due to the nature of triathlons as a race consisting of multiple sports many pieces of technical equipment have been borrowed from other sports, or developed specifically in an effort to race faster and improve a competitors safety. 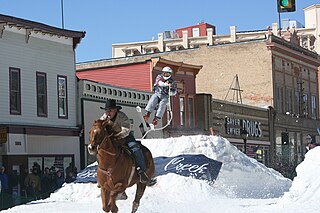 Skijoring is a winter sport in which a person on skis is pulled by a horse, a dog or a motor vehicle. It is derived from the Norwegian word skikjøring, meaning "ski driving". Although skijoring is said to have originated as a mode of winter travel, it is currently primarily a competitive sport. 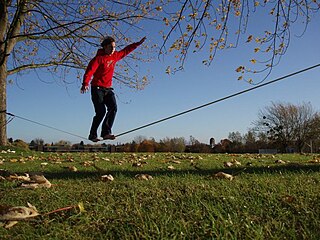 Slacklining refers to the act of walking, running or balancing along a suspended length of flat webbing that is tensioned between two anchors. Slacklining is similar to slack rope walking and tightrope walking. Slacklines differ from tightwires and tightropes in the type of material used and the amount of tension applied during use. Slacklines are tensioned significantly less than tightropes or tightwires in order to create a dynamic line which will stretch and bounce like a long and narrow trampoline. Tension can be adjusted to suit the user, and different webbing may be used in various circumstances. 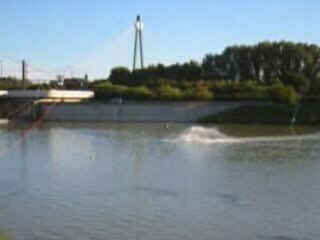 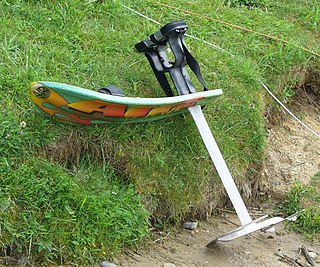 Richard Downing Pope Jr., better known as Dick Pope Jr., was a World Champion water skier and an important business leader in Central Florida. Pope was an important innovator in the sport of water skiing, including the development of barefoot skiing in 1947. He is the son of Dick Pope Sr., the founder of Cypress Gardens theme park.

Long Lake is a freshwater lake located in Thurston County, Washington, United States. It is located approximately 5.5 miles (8.9 km) east of Olympia. It consists of two basins connected by a narrow neck. It is two miles long and has two islands, Holmes Island and Kirby Island. Long Lake is fed by Pattison Lake and drains via Himes/Woodland Creek and Lois Lake to Henderson Inlet. Long Lake was given its descriptive name in 1853.

Wayne Grimditch is an American water skier. He competed for the United States in the 1972 Summer Olympics in Germany, winning two silver medals in the water skiing. Grimditch would go on to establish 10 U.S. national jumping records and four world marks in the sport. He earned 16 national titles and was the first skier to earn jumping records in the Junior Boy's, Boy's and Men's divisions simultaneously. Grimditch was known as a child prodigy qualifying for his first national tournament in slalom at just nine years old and winning the world jumping title in Copenhagen, Denmark at age 14. Due to a concussion, he began wearing a helmet which became common to the sport—though not a requirement—thereafter.

Mike Seipel is a retired American competitive barefoot water skier. He was considered to be one of the greatest barefoot water skiers in the world. He was a member of the United States Barefoot Team and was a two-time overall world champion in 1984-85 and 1986–87. Seipel didn't win any medals at his first Worlds, but he launched a sports career that would eventually earn him 11 National titles, six World titles and nine World records. He skied on eight U.S. Barefoot Water Ski Teams and has since trained numerous National and World champions at his Barefoot International Ski School. Mike invented the inverted barefoot jumping technique, which he first attempted in competition at the world championships in 1990. This technique is now used by all the top competitors around the world and has allowed the world record to be extended up to almost 30m. Mike was also well known for being the first footer to do tricks like one-foot 360 turns and a stepover back-to-front feet-to-feet in competition.

Keith St. Onge is a professional barefoot water skier. He holds the record for the most U.S. National Overall Pro titles at fourteen, a record previously held by Ron Scarpa. Keith is a two-time World Barefoot Champion, winning Overall titles in 2006 and 2008.