Barrancabermeja is a city in Colombia, located on the shore of the Magdalena River, in the western part of the department of Santander. It is home to the largest oil refinery in the country. Barrancabermeja is known as the Oil Capital of Colombia. [1]

It is located 114 km west of Bucaramanga, on the banks of the Magdalena River in the Middle Magdalena region, which is the largest municipality and second in the entire department.

Barrancabermeja has high temperatures all year round. It is considered to be one of the hottest cities in Colombia. It is surrounded by water resources which make it very humid.

Puerto Wilches lies to the north of Barrancabermeja; Puerto Parra and Simacota to the south; San Vicente de Chucuri and Giron to the southeast; and Magdalena River to the west. It is 116 km from Bucaramanga, the capital of Santander. [2] The city is situated on the banks of the Magdalena River. In the past a Ferry service would cross between Santander and Antioquia, on the opposite side, where further oil fields are found. A bridge now spans the river at this location.

Barrancabermeja's culture has been largely affected by the migratory movements caused by the oil boom. The city exhibits an amalgam of many regional customs from Colombia. [ citation needed ] Due to its history as an oil town, the city is often visited by moneyed foreigners, often engineers and supervisory employees and technicians of oil companies. Thus Barrancabermeja has a reputation as an open and vibrant city and may be somewhat cosmopolitan.

Barrancabermeja's night life includes Salsa and merengue dance clubs. The city's culture presents a strong Caribbean influence that nevertheless is not exclusive of other cultural expressions from among the variety found in Colombia. The predominant music in the city is vallenato and other Caribbean rhythms including papayera.

Several local and national political organizations including unions, women's organizations, and human rights groups are active. Marches and demonstrations are quite common and the oil workers union is among the most important in the nation.

The commercial area of the city is adjacent to the river port ("the Port") where motor boats and canoes constantly arrive with fish and agricultural products from farmers along the river that include maize, cassava (or yuca in Spanish), plantain, and cacao.

In 1996 and 2000, Barrancabermeja hosted the Mundial de Patinaje, an international rollerblading competition. [3] 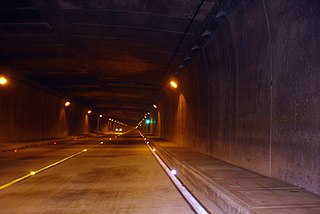 Transport in Colombia is regulated by the Ministry of Transport.

Bucaramanga is the capital and largest city of the department of Santander, Colombia. Bucaramanga has the fifth-largest economy by GDP in Colombia, has the highest GDP per capita in Colombia, has the lowest unemployment rate and has the ninth-largest population in the country, with 581,130 people. Bucaramanga has over 160 parks scattered throughout the city and has been given the nickname "La Ciudad de Los Parques" and "La Ciudad Bonita de Colombia".

Puerto Boyacá is a Colombian river-port town and municipality by the Magdalena River in the Boyacá Department, where is also considered a Special Handling Zone due to its port status. Its main industries are oil exploration and processing. In the 1980s and early 1990s, Puerto Boyacá was affected intensively by the Colombian Armed Conflict.

Palonegro International Airport is on a mountain ridge 7 kilometres (4.3 mi) west of Bucaramanga in the Santander Department of Colombia. The airport provides the Bucaramanga Metropolitan Area and surrounding towns with access to international and domestic flights.

Yondó is a town and municipality in Antioquia Department, Colombia. The first settlers arrived around 10,000 BC; archaeological site. The town was founded in 1941 to lodge the, at that time, discovered Casabe oilfield's engineers and workers of Shell Colombia S.A.(SCSA) Subsidiary of Royal Dutch Shell. The town became a municipality in 1979. It is a Magdalena river port, across a river from Barrancabermeja, where Colombia's oldest and largest oil refinery is located.

Puerto Berrío is a municipality and town in the Colombian department of Antioquia.

Barbosa is a town in the Santander Department in northeastern Colombia. Municipality of the province of Vélez.

San Gil is a town municipality in the Department of Santander in northeastern Colombia, located roughly 300 km (192 mi) from Bogotá and 95 km from the department's capital, Bucaramanga. As of 2020, San Gil had a population of roughly 46,000 people within the total municipal area, making it the third largest urban area in the department, after Bucaramanga and Barrancabermeja. Founded in 1689, San Gil is over 300 years old. It was officially named the tourist capital of the region in 2004, thanks to its outdoor activity opportunities such as rafting, caving, kayaking and hiking. 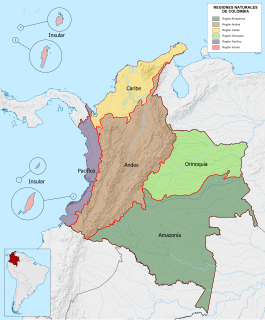 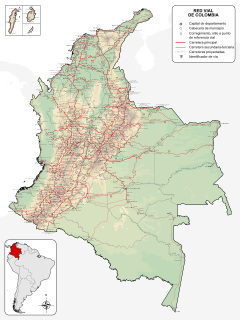 Colombian geography presents formidable challenges to roadbuilders, needing to communicate its largest production centers deep inside the Andes with major ports in both the Atlantic and Pacific oceans. All of this carries a heavy premium to roadbuilding, compared with the cost of building highways in flat terrains. Therefore, the Colombian government is undertaking a great effort in order to improve the highway system, under the name of Fourth Generation Highways, with the intent of updating major roads to international safety and speed standards. This project will be funded through both public and private capital, with a total worth of nearly US$23 billion, accounting to a yearly investment of 3% of national GDP, improving or building a grand total of over 8.000 km of roads. These roads are expected to improve Colombia's competitiveness in order to successfully take advantage of the many trade agreements signed in recent years. 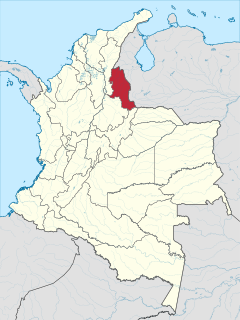 The Roman Catholic Diocese of Barrancabermeja is a Latin suffragan diocese in the Ecclesiastical province of Bucaramanga.

Lebrija River is a river of northern Colombia. It originates in the Eastern Ranges of the Colombian Andes in Piedecuesta and flows through the northern part of the department of Santander into the Magdalena River in Puerto Wilches. 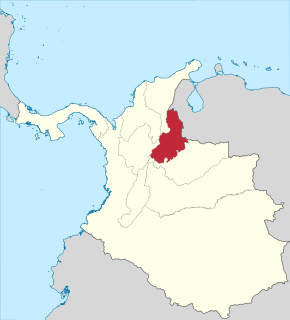 Lebanese Colombians are Colombians of Lebanese descent. Most of the Lebanese community's forebears immigrated to Colombia from the Ottoman Empire in the late 19th and early 20th centuries for economic, political and religious reasons. When they were first processed in the ports of Colombia, they were classified as Turks because what is modern day Lebanon was a territory of the Turkish Ottoman Empire. The first Lebanese moved to Colombia in the late nineteenth century. There was another wave in the early twentieth century. It is estimated that over 10,000 Lebanese immigrated to Colombia from 1900 to 1930.

The Bucaramanga-Santa Marta Fault or Bucaramanga-Santa Marta Fault System is a major oblique transpressional sinistral strike-slip fault in the departments of Magdalena, Cesar, Norte de Santander and Santander in northern Colombia. The fault system is composed of two main outcropping segments, named Santa Marta and Bucaramanga Faults, and an intermediate Algarrobo Fault segment in the subsurface. The system has a total length of 674 kilometres (419 mi) and runs along an average north-northwest to south-southeast strike of 341 ± 23 from the Caribbean coast west of Santa Marta to the northern area of the Eastern Ranges of the Colombian Andes.

The Cimitarra Fault is a sinistral oblique thrust fault in the departments of Antioquia, Bolívar and Santander in central Colombia. The fault has a total length of 136.5 kilometres (84.8 mi) and runs along an average northeast to southwest strike of 323 ± 3 in the Middle Magdalena Valley and Central Ranges of the Colombian Andes.