Bartolomeu de Gusmão Airport( IATA : SNZ, ICAO : SBSC) was a Brazilian airport built to handle the operations with the rigid airships Graf Zeppelin and Hindenburg . The airport was named after Bartolomeu Lourenço de Gusmão (1685–1724), a Portuguese priest born in Brazil who did research about transportation with balloons.

Between 1931 and 1937, Deutsche Luft Hansa had regular flights between Germany and Brazil, which were operated by Luftschiffbau Zeppelin using its rigid airships Graf Zeppelin and Hindenburg . [2] Rio de Janeiro was the final stop, where passengers could connect with aircraft services to Southern Brazil, Uruguay, Argentina, Chile and Bolivia operated by Syndicato Condor, the Brazilian subsidiary of Deutsche Luft Hansa. [3] During its five years of regular scheduled summer season intercontinental commercial airship service between Germany and South America, the hangar was used only nine times: four by the LZ-127 Graf Zeppelin and five by the LZ-129 Hindenburg. [4] Assembled from parts brought from Germany, the construction was subsidized by the Brazilian government. [5]

The airport was inaugurated on December 26, 1936 by President Getúlio Vargas, in the presence of the German Ambassador Schmidt Elskop. Before this, rigid airships were docked at Campo dos Afonsos.

The new airport consisted of an airfield, a hangar, a customs house, an office building, a radio-operations building, 5 bedrooms for workers, crew-lodgings, a work and storage house, a hydrogen factory, a plant to mix hydrogen with butane, and a branch line connecting the complex to the main railway line to downtown Rio de Janeiro 54 km away. The whole complex was built by the Luftschiffbau Zeppelin and are partially still in use by the Brazilian Air Force, which occupies the site. [6]

The hangar is an original surviving example of a structure built to accommodate rigid airships and the only Zeppelin airship hangar which remains a hangar. [7] Because of its historical importance, it was listed as a National Heritage Site on March 14, 1999.

As a consequence of the Hindenburg disaster on May 6, 1937 at Lakehurst Air Naval Station in New Jersey, US, the Luftschiffbau Zeppelin requested to the Brazilian Government on June 17, 1937 the suspension of services. After that no more civil operations were handled at this facility.

José Cleto Airport is the airport serving União da Vitória, Brazil. It is named after José Cleto (1901-1960), a local entrepreneur, politician and film producer and director. 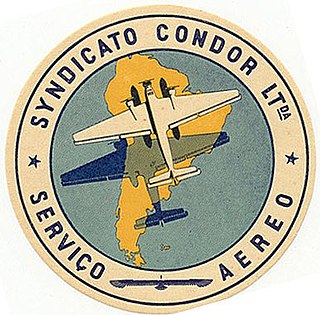 Condor Syndikat was a German trade company, with headquarters in Berlin, that operated airline services in Brazil while also providing aircraft, maintenance and aviation information. It is also the parent company of the Brazilian airlines Varig and Syndicato Condor, which later became Serviços Aéreos Cruzeiro do Sul. They were the two oldest airlines in Brazil. 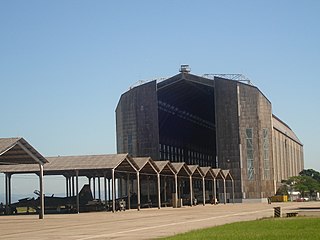 Santa Cruz Air Force Base – BASC is a base of the Brazilian Air Force located in Rio de Janeiro, Brazil. 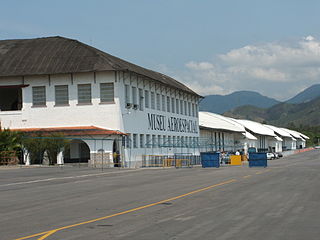 Central Aérea Limitada was a Brazilian airline founded in 1948. In 1950 Central established a technical and operational partnership with Transportes Aéreos Nacional. Finally, in 1955 Central was sold to and incorporated by Nacional.

Companhia Meridional de Transportes was a Brazilian airline founded in 1944. In 1946, following the death of its owner on an air-crash, the airline went bankrupt.

Universal Transportes Aéreos was a Brazilian airline founded in 1947. In December 1948 it ceased operations.