Bartosz Bereszyński (born 12 July 1992) is a Polish professional footballer who plays as a defender for Sampdoria and the Poland national team.

Born in Poznań, Bereszyński played youth football with TPS Winogrady Poznań, Poznaniak Poznań, Warta Poznań and Lech Poznań. [3] He played senior football with Lech Poznań, Warta Poznań and Legia Warsaw. [3] [4] While with Lech Poznań, he played in the UEFA Europa League qualifying rounds. [5] He was one of the very few players to have moved voluntarily from Lech to Legia, who are fierce rivals, [6] was nicknamed "Judas" [7] and received a violent reaction from the Lech fans. [8]

Bereszyński was sent off in the last round of the 2013–14 UEFA Europa League Group stage, [9] and was suspended for the next three European matches. He did not feature in the second round nor the first leg of the 3rd qualification round in the 2014–15 UEFA Champions League. However, as his club failed to include him in their squad registration for the second round matches, he had not finished his suspension when he came on as a sub in the 86th minute in the return leg against Celtic F.C. in the third round. Legia won the match 2–0, and 6–1 on aggregate. However, after considering the mistake, UEFA set the result to a 3–0 win for Celtic. This made the Scottish team winners on the away goals rule. [10]

In January 2017, Bereszyński moved to Italy, signing a four-year deal with Sampdoria. [11]

Legia Warszawa, known in English as Legia Warsaw, is a professional football club based in Warsaw, Poland. Legia is one of the most successful Polish football clubs in history winning 13 Ekstraklasa Champions titles, a record 19 Polish Cup trophies and four Polish SuperCup matches. The club's home venue is the Polish Army Stadium. 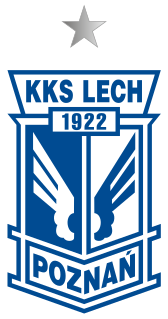 MKS Pogoń Szczecin is a Polish professional football club, based in Szczecin, West Pomeranian Voivodeship. The club also has a men's handball team that plays in the Superliga.

Maciej Stanisław Żurawski is a retired Polish footballer who played as a striker.

Polonia Bytom is a Polish football club founded on 4 January 1920 in the Upper Silesian city of Bytom, during the hectic months of the Silesian Uprisings. In late 1922, however, as a result of the Upper Silesia plebiscite, Bytom became part of Germany and the club ceased to exist.

Jan Urban is a Polish retired footballer who played as a striker, and a current manager. 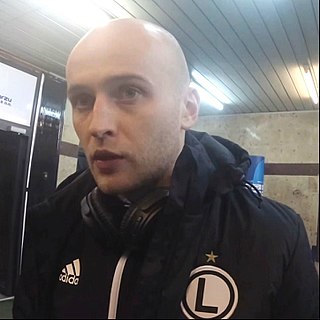 Michał Pazdan is a Polish professional footballer who plays as a centre-back for Ankaragücü.

Maciej Skorża is a Polish football manager. He is currently in charge of the United Arab Emirates national under-23 football team. 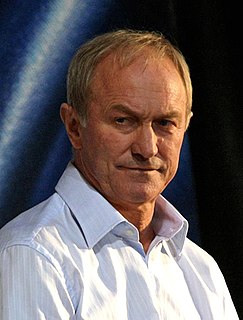 Franciszek Smuda is a Polish football coach and former footballer who also holds a German passport. As a player, he spent his career playing for clubs in Poland, the United States and Germany. In 1983, he turned to coaching, becoming the manager of Widzew Łódź, Wisła Kraków, Legia Warsaw and Lech Poznań, among others. He has won three Polish league titles. Since 2009 he was the manager of the Poland national football team, but resigned on 16 June 2012, following their elimination from Euro 2012.

Maciej Górski is a Polish footballer who currently plays for Radomiak Radom.

The 2012–13 Ekstraklasa or T-Mobile Ekstraklasa for sponsorship reasons, was the 79th season of the highest level of football leagues in Poland since its establishment in 1927. It began on 17 August 2012 and concluded on 2 June 2013. A total of 16 teams are participating, 14 of which competed in the league during the 2011–12 season, while the remaining two were promoted from the I Liga. Each team played a total of 30 matches, half at home and half away. 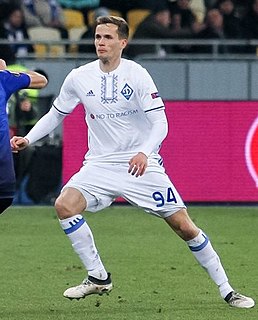 Dawid Igor Kownacki is a Polish professional footballer who plays as a striker for Bundesliga club Fortuna Düsseldorf, and the Polish national team. 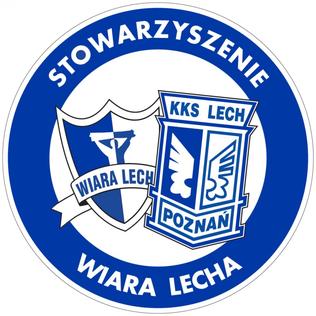 The 2018–19 season is the 92nd season of competitive football in Poland.

Lech Poznań is a Polish football club based in Poznań. This is their 97th season overall. They compete in Ekstraklasa, the highest ranking league in Poland.

Daniel Bogdan Stefański is a Polish football referee who officiates in the Ekstraklasa. He has been a FIFA referee since 2013, and is ranked as a UEFA first category referee.