Basaseachic Falls is located in the high mountains of the Sierra Madre Occidental, in the Municipality of Ocampo, 3 km (1.9 mi) from Basaseachi community and about 265 km (165 mi) west of Chihuahua. [1] It is reached via Federal Highway 16 and its surroundings make up the Basaseachic Falls National Park (Parque Nacional Cascada de Basaseachic).

The waterfall is made by two streams, Arroyo del Durazno and Arroyo de Basaseachic, which merge in the high mountains and then fall down the canyon wall. Past the falls, the stream is called Río Candameña (Candameña River), which is the namesake of the canyon it flows through, Candameña Canyon (Cañón Candameña). The Candameña River is a tributary of the Río Mayo (Mayo River).

Basaseachic Falls was considered the tallest waterfall in México until the measurement in September, 1994 of the Cascada de Piedra Volada. Both of these waterfalls are seasonal, drying up in the Spring and Autumn dry seasons. 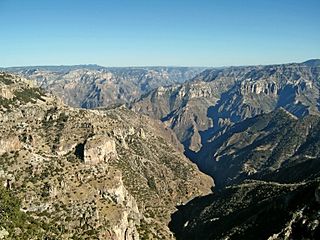 Copper Canyon is a group of six distinct canyons in the Sierra Madre Occidental in the southwestern part of the state of Chihuahua in northwestern Mexico. The canyons were formed by six rivers that drain the western side of the Sierra Tarahumara. All six rivers merge into the Rio Fuerte and empty into the Gulf of California. The walls of the canyon are a copper/green color, which is the origin of the name. 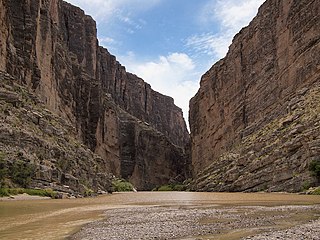 Itatiaia National Park, established in 1937, is the oldest national park in Brazil. It is located on the border between the states of Rio de Janeiro and Minas Gerais. 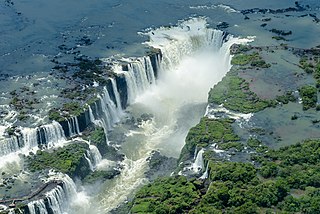 Iguaçu National Park is a national park in Paraná State, Brazil. It comprises a total area of 185,262.5 hectares and a length of about 420 kilometres (260 mi), 300 kilometres (190 mi) of which are natural borders by bodies of water and the Argentine and Brazilian sides together comprise around 260,000 hectares. Iguaçu National Park was created by federal decree nr. 1035 of January 10, 1939, and became a UNESCO World Heritage Site in 1986. The park is managed by Chico Mendes Institute for Biodiversity Conservation (ICMBio).

The Arroyo Seco, meaning "dry stream" in Spanish, is a 24.9-mile-long (40.1 km) seasonal river, canyon, watershed, and cultural area in Los Angeles County, California. The area was explored by Gaspar de Portolà who named the stream Arroyo Seco as this canyon had the least water of any they had seen. During this exploration he met the Chief Hahamog-na (Hahamonga) of the Tongva Indians.

The Iguazú National Park is a national park of Argentina, located in the Iguazú Department, in the north of the province of Misiones, Argentine Mesopotamia. It has an area of 677 km2 (261 sq mi). 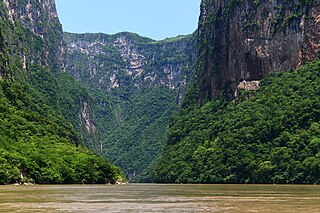 Sumidero Canyon is a deep natural canyon located just north of the city of Chiapa de Corzo in the state of Chiapas, in southern Mexico. The canyon's creation began around the same time as the Grand Canyon in the U.S. state of Arizona, by a crack in the area's crust and subsequent erosion by the Grijalva River, which still runs through it. Sumidero Canyon has vertical walls which reach as high as 1,000 metres (3,300 ft), with the river turning up to 90 degrees during the 13-kilometre (8.1 mi) length of the narrow passage.

The Chapada dos Guimarães National Park is a national park in the state of Mato Grosso, Brazil. It is a region of rugged terrain with dramatic cliffs and waterfalls, and contains the geographical centre of the continent.

Piedra Volada Falls is a 366-meter tall plunge waterfall in the Barranca Candameña of the Sierra Madre Occidental range in Chihuahua, Mexico.

Lake Arareco is a lake high in the Sierra Madre Occidental range, within Chihuahua state in northwestern Mexico.

Eaton Canyon is a major canyon beginning at the Eaton Saddle near Mount Markham and San Gabriel Peak in the San Gabriel Mountains in the Angeles National Forest, United States. Its drainage flows into the Rio Hondo river and then into the Los Angeles River. It is named after Judge Benjamin S. Eaton, who lived in the Fair Oaks Ranch House in 1865 not far from Eaton Creek.

The Cumbres de Monterrey is a national park of Mexico located in the northern portion of the Sierra Madre Oriental in the states of Nuevo León and Coahuila, near the city of Monterrey. The park protects more than 1,770 square kilometres (680 sq mi) of rugged terrain boasting deep canyons, rivers, waterfalls, and scenic mountain peaks, including the Cerro de la Silla, part of Monterrey's famous skyline. 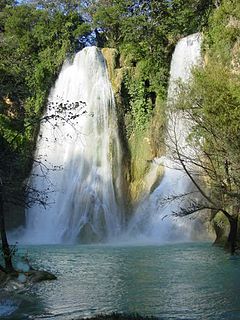 Basaseachic Falls National Park is a national park located in the western side of the state of Chihuahua in the heart of the Sierra Madre Occidental mountain range. The park is named after Basaseachic Falls the second tallest waterfall in Mexico with a height of 246 meters (853 ft). Basaseachic Falls empties into Candameña Canyon which was carved by the Basaseachic River over millions of years. The park is known for its pine-oak forest, rock formations, and scenic views from high cliffs. Cliffs in the park reach an impressive height of 1,640 meters (5,380 ft).

The Tamá National Natural Park is a national park located in the Tamá Massif of the Andean Region of Colombia, between the municipalities Toledo and Herrán, in the department of Norte de Santander, in the northeastern part of the Eastern Ranges of the Colombian Andes. One of the main attractions of the park is a 820-metre-high (2,690 ft) waterfall, one of the world's highest.

Cuarenta Casas is an archaeological site in the northern Mexican state of Chihuahua. Construction of the site is attributed to the Mogollon culture.

Ribes ceriferum is a Mexican species of currants. It has been found in only a small number of locations in the States of Durango and Chihuahua. Some of the known populations lie inside Parque Nacional Cascada de Basaseachic in Chihuahua and Parque Natural de Mexiquillo in Durango.

The Rio Preto State Park is a state park in the state of Minas Gerais, Brazil. It protects a mountainous area of cerrado vegetation that is home to various endemic, rare or endangered species. Trails provide environmental interpretation, and lead to lookouts that give panoramic views, to rivers and waterfalls, and to archaeological sites with rock paintings.