Basket-Hall Krasnodar opened in 2011. It has been used as the regular home arena of the Russian VTB United League club Lokomotiv Kuban. [2] The arena was renovated in 2017.

Kuban is a geographic region of Southern Russia surrounding the Kuban River, on the Black Sea between the Don Steppe, the Volga Delta and the Caucasus, and separated from the Crimean Peninsula to the west by the Kerch Strait. Krasnodar Krai is often referred to as "Kuban", both officially and unofficially, although the term is not exclusive to the krai and accommodates the republics of Adygea, Karachay-Cherkessia, and parts of Stavropol Krai.

Central Stadium is a multi-purpose stadium in Astrakhan, Russia. It is used mostly for football matches and is the home stadium of Volgar Astrakhan. The stadium holds 21,500 people, all seated. 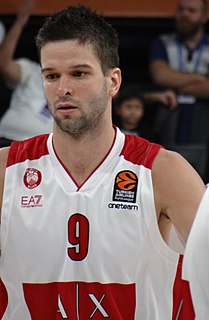 Basket-Hall Kazan is a basketball specialized indoor arena that is located in Kazan, Russia. It is primarily used for basketball, but it can also be used for volleyball and concerts. It contains two basketball halls. 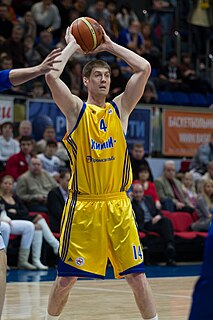 Alexey Dmitrievitch Savrasenko is a retired Russian-Greek professional basketball player. He played at the center position. 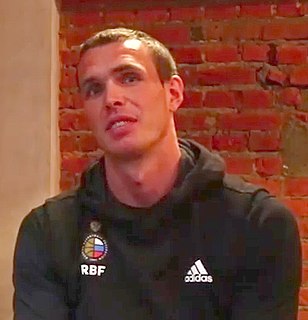 Sergey Vladimirovich Bykov is a Russian former professional basketball player and basketball coach. Standing at 1.90 m, he played at the point guard and shooting guard positions.

Georgios Bartzokas is a Greek former professional basketball player and current head coach for Olympiacos. He became the first Greek coach to win the EuroLeague title, after winning it in the 2012–13 season with Olympiacos.

Darüşşafaka Basketbol, known as Darüşşafaka Tekfen Basketbol for sponsorship reasons, commonly also known as Daçka Basketbol or simply Daçka, is a professional basketball club that is based in Istanbul, Turkey. Darüşşafaka's basketball section, which was founded in 1914, is a part of Darüşşafaka Spor Kulübü multi-sport club, which was founded in 1914. The club's basketball department is their most successful section. The club plays in the Turkish Basketball Super League. Its home arena for national domestic Turkish Super League games is the Darüşşafaka Ayhan Şahenk Sports Hall, with a seating capacity of 3,500, while its home arena for European-wide games is the Volkswagen Arena Istanbul, with a seating capacity of 5,240. 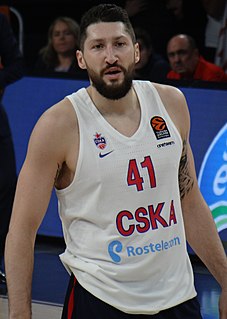 Nikita Aleksandrovich Kurbanov is a Russian professional basketball player and the team captain of CSKA Moscow of the VTB United League and the EuroLeague. Standing at 2.02 m, he can play at both the small forward and power forward positions. 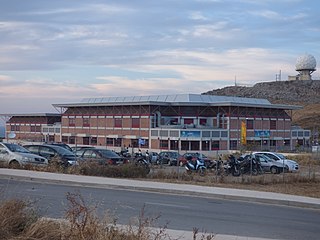 Heraklion Indoor Sports Arena, or simply, Heraklion Arena, is a multi-purpose indoor arena that is located in the city of Heraklion, on the island of Crete, in Greece. It is located in a district called Dyo Aorakia. The arena can be used to host gymnastics, handball, volleyball, basketball, boxing, wrestling, fencing, badminton, table tennis, Judo, MMA, and weightlifting, with its primary use being to host basketball games.

2012–13 Eurocup Basketball was the 11th edition of Europe's second-tier level transnational competition for men's professional basketball clubs, the EuroCup. The EuroCup is the European-wide league level that is one level below the EuroLeague. The winner of this competition earned a place at the group stage of the next season's EuroLeague.

The Krasnodar mechanical plant of non-standard equipment, commonly known as AvtoKuban, was a Soviet/Russian company that manufactured buses based on truck chassis.

The 2011–12 FC Kuban Krasnodar season was the first season back in the Russian Premier League, the highest tier of football in Russia, following relegation to the Russian National Football League at the end of the 2009 season. Kuban finished the season in 8th position, their best ever finish, whilst also reaching the Round of 32 in the Russian Cup, where they were defeated by Dynamo Bryansk.

The 2015 Russian Cup Final decided the winner of the 2014–15 Russian Cup, the 23rd season of Russia's main football cup. It was played on 21 May 2015 at the Central Stadium in Astrakhan, between Lokomotiv Moscow and Kuban Krasnodar. Lokomotiv came back from behind and emerged victorious with a 3-1 win in extra time.

The 2015–16 Russian Cup, known as the 2015–16 Pirelli–Russian Football Cup for sponsorship reasons, was the 24th season of the Russian football knockout tournament since the dissolution of Soviet Union. 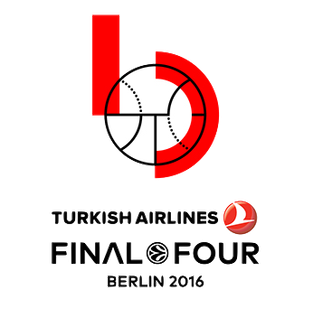 The 2016 Euroleague Final Four was the concluding EuroLeague Final Four tournament of the 2015–16 Euroleague season, which was the 59th season of Europe's premier club basketball tournament, and the 16th season since it has been organised by Euroleague Basketball. The Final Four was played at the Mercedes-Benz Arena, in Berlin, Germany, on May 2016. CSKA Moscow won its 7th EuroLeague title, after beating Fenerbahçe in the championship game, by a score of 101–96, in overtime.