The Battle of Attu, which took place on 11–30 May 1943, was a battle fought between forces of the United States, aided by Canadian reconnaissance and fighter-bomber support, and Japan on Attu Island off the coast of the Territory of Alaska as part of the Aleutian Islands Campaign during the American Theater and the Pacific Theater.

The more than two-week battle ended when most of the Japanese defenders were killed in brutal hand-to-hand combat after a final banzai charge broke through American lines.

The strategic position of the islands of Attu and Kiska off Alaska's coast meant their location could control the sea lanes across the Northern Pacific Ocean. Japanese planners believed control of the Aleutians would therefore prevent any possible U.S. attacks from Alaska. This assessment had already been inferred by U.S. General Billy Mitchell who told the U.S. Congress in 1935, "I believe that in the future, whoever holds Alaska will hold the world. I think it is the most important strategic place in the world."

On 7 June 1942, six months after the United States entered World War II, the 301st Independent Infantry Battalion from the Japanese Northern Army landed unopposed on Attu. The landings occurred one day after the invasion of nearby Kiska. The U.S. military now feared both islands could be turned into strategic Japanese airbases from which aerial attacks could be launched against mainland Alaska and the rest of the U.S. West Coast.

In Walt Disney′s 1943 film, Victory Through Air Power, the use of the Aleutian Islands for American long-range bombers to bomb Japan was postulated. [3]

On 21–22 May 1943, a powerful Japanese fleet assembled in Tokyo Bay in preparation for a sortie to repel the American attempt to recapture Attu. The fleet included the carriers Zuikaku, Shōkaku, Jun'yō, Hiyō, the battleships Musashi, Kongō, Haruna, and the cruisers Mogami, Kumano, Suzuya, Tone, Chikuma, Agano, Ōyodo, and eleven destroyers. The Americans, however, recaptured Attu before the fleet could depart. [5]

On 29 May 1943, without hope of rescue, Yamasaki led his remaining troops in a banzai charge. The surprise attack broke through the American front line positions. Shocked American rear-echelon troops were soon fighting in hand-to-hand combat with Japanese soldiers. The battle continued until almost all of the Japanese were killed. The charge effectively ended the battle for the island, although U.S. Navy reports indicate that small groups of Japanese continued to fight until early July 1943. In 19 days of battle, 549 soldiers of the 7th Division were killed and more than 1,200 injured. The Japanese lost over 2,351 men, including Yamasaki; only 28 prisoners were taken. [2]

The loss of Attu and the evacuation of Kiska came shortly after the death of Admiral Isoroku Yamamoto, who was killed by American aircraft in Operation Vengeance. These defeats compounded the demoralizing effect of losing Yamamoto on the Japanese High Command. [6] Despite the losses, Japanese propaganda attempted to present the Aleutian Island campaign as an inspirational epic. [6] 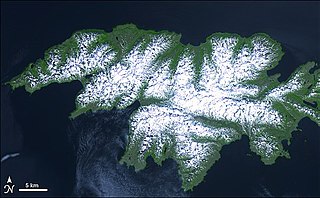 Simon Bolivar Buckner Jr. was a lieutenant general in the United States Army during World War II. He served in the Pacific Theater of Operations and commanded the defenses of Alaska early in the war. Following that assignment, he was promoted to command the Tenth Army, which conducted the amphibious assault on the Japanese island of Okinawa on April 1, 1945. He was killed during the closing days of the Battle of Okinawa by enemy artillery fire, making him the highest-ranking United States military officer lost to enemy fire during World War II. He would remain the highest ranking military member to be killed by a foreign armed action until the death of Lieutenant General Timothy Maude during the September 11 attacks. 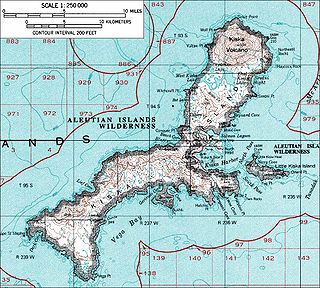 Kiska is an island in the Rat Islands group of the Aleutian Islands of Alaska. It is about 22 miles (35 km) long and varies in width from 1.5 to 6 miles. It is part of Aleutian Islands Wilderness and as such, special permissions are required to visit it. The island has no permanent population. 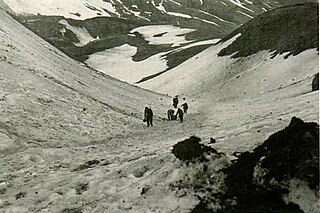 The Aleutian Islands campaign was a military campaign conducted by the United States and Japan in the Aleutian Islands, part of the Territory of Alaska, in the American theater and the Pacific theater of World War II starting on 3 June 1942. In the only two invasions of the United States during the war, a small Japanese force occupied the islands of Attu and Kiska, where the remoteness of the islands and the challenges of weather and terrain delayed a larger U.S.-Canadian force sent to eject them for nearly a year. The islands' strategic value was their ability to control Pacific transportation routes, which is why U.S. General Billy Mitchell stated to the U.S. Congress in 1935, "I believe that in the future, whoever holds Alaska will hold the world. I think it is the most important strategic place in the world." The Japanese reasoned that control of the Aleutians would prevent a possible U.S. attack across the Northern Pacific. Similarly, the U.S. feared that the islands would be used as bases from which to carry out a full-scale aerial attack on U.S. West Coast cities like Anchorage, Seattle, San Francisco, or Los Angeles.

The Eleventh Air Force (11 AF) is a Numbered Air Force of the United States Air Force Pacific Air Forces (PACAF). It is headquartered at Joint Base Elmendorf–Richardson, Alaska. 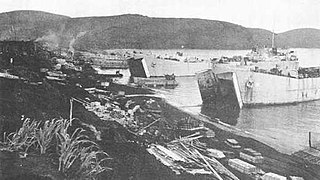 Operation Cottage was a tactical maneuver which completed the Aleutian Islands campaign. On August 15, 1943, Allied military forces landed on Kiska Island, which had been occupied by Japanese forces since June 1942. 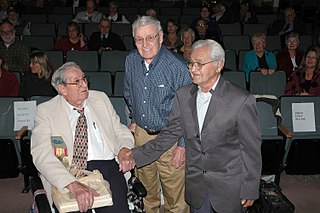 Castner's Cutthroats was the unofficial name for the 1st Alaskan Combat Intelligence Platoon (Provisional), also known as Alaskan Scouts. Castner's Cutthroats fought during World War II and were instrumental in defeating the Japanese during the Aleutian Islands Campaign. The unit was composed of just sixty-five men selected to perform reconnaissance missions in the Aleutian Islands during the war.

Major General Charles Harrison Corlett, nicknamed "Cowboy Pete", was a senior United States Army officer who commanded troops in both the Pacific and European Theaters during World War II. He led the attack on Kiska in 1943 and commanded the 7th Infantry Division in the taking of Kwajalein in 1944. After D-Day he led the XIX Corps in pursuit of the retreating German Army through France, Belgium, Holland, and Germany. 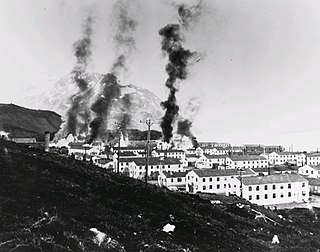 Paul Nobuo Tatsuguchi, sometimes mistakenly referred to as Nebu Tatsuguchi, was a surgeon in the Imperial Japanese Army (IJA) during World War II. He was killed during the Battle of Attu on Attu Island, Alaska, United States on May 30, 1943. 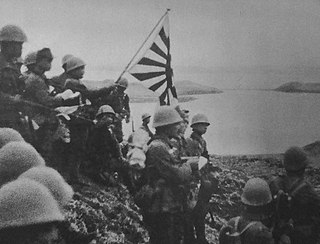 The Japanese occupation of Kiska took place between 6 June 1942 and 28 July 1943 during the Aleutian Islands Campaign of the American Theater and the Pacific Theater of World War II. The Japanese occupied Kiska and nearby Attu Island in order to protect the northern flank of the Japanese Empire. Along with the Attu landing the next day, it was the first time that the continental United States was occupied by a foreign power since the War of 1812, and was one of the only two invasions of the United States during World War II.

The Japanese Occupation Site on Kiska island in the Rat Islands group of the Aleutian Islands of Alaska is where the Imperial Japanese Navy attacked and occupied the island in World War II, as one of the only two enemy invasion sites in North America during the war. The Japanese built defenses and other infrastructure on the island before abandoning it in 1943 after losing the Battle of Attu. American and Canadian forces reoccupied the abandoned island, and departed the island in 1946. Now a part of the Alaska Maritime National Wildlife Refuge, the central portion of the island, where these military activities were concentrated, was designated a National Historic Landmark in 1985.

Western Defense Command (WDC) was established on 17 March 1941 as the command formation of the U.S. Army responsible for coordinating the defense of the Pacific Coast region of the United States during World War II. A second major responsibility was the training of soldiers prior to their deployment overseas. The first Commanding General of WDC was Lieutenant General John L. DeWitt, who continued on in command of the Fourth U.S. Army. WDC headquarters were co-located at the existing Fourth Army headquarters at the Presidio of San Francisco. WDC's operational region covered the states of Washington, Oregon, California, Idaho, Montana, Nevada, Utah, and Arizona, and the Territory of Alaska. However, until 11 December 1941, the command was little more than a planning agency. On that date the Army coast defense, antiaircraft, and fighter assets on the West Coast were placed under the command, which until 20 March 1942 was known as the Western Theater of Operations, then reverted to the previous name. From 11 December 1941 until 1 November 1943, Alaska Defense Command was controlled through WDC. 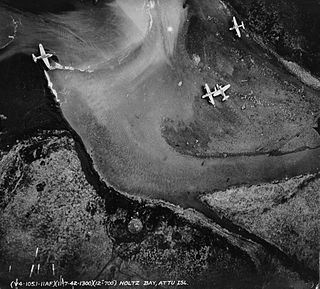 The Japanese occupation of Attu was the result of an invasion of the Aleutian Islands in Alaska during World War II. Imperial Japanese Army troops landed on 7 June 1942 the day after the invasion of Kiska. Along with the Kiska landing, it was the first time that the continental United States was invaded and occupied by a foreign power since the War of 1812, and was the second of the only two invasions of the United States during World War II. The occupation ended with the Allied victory in the Battle of Attu on 30 May 1943.

The military history of the Aleutian Islands began almost immediately following the purchase of Alaska from the Russian Empire by the United States in 1867. Prior to the early 20th century, the Aleutian Islands were essentially ignored by the United States Armed Forces, although the islands played a small role in the Bering Sea Arbitration when a number of British and American vessels were stationed at Unalaska to enforce the arbitrators' decision. By the early 20th century, a number of war strategies examined the possibility of conflict breaking out between the Empire of Japan and the United States. While the Aleutian Islands were seen as a potential staging point for invasions by either side, this possibility was dismissed owing to the islands' dismal climate. In 1922, the Washington Naval Treaty was signed, after which the United States Navy began to take an interest in the islands. However, nothing of significance was to materialize until World War II.

Naval Air Facility Adak, was a United States Navy airport located west of Adak, on Adak Island in the U.S. state of Alaska. After its closure in 1997, it was reopened as Adak Airport. The facility was designated a National Historic Landmark for its role in World War II, although most of its elements from that period have been demolished or lie in ruins. 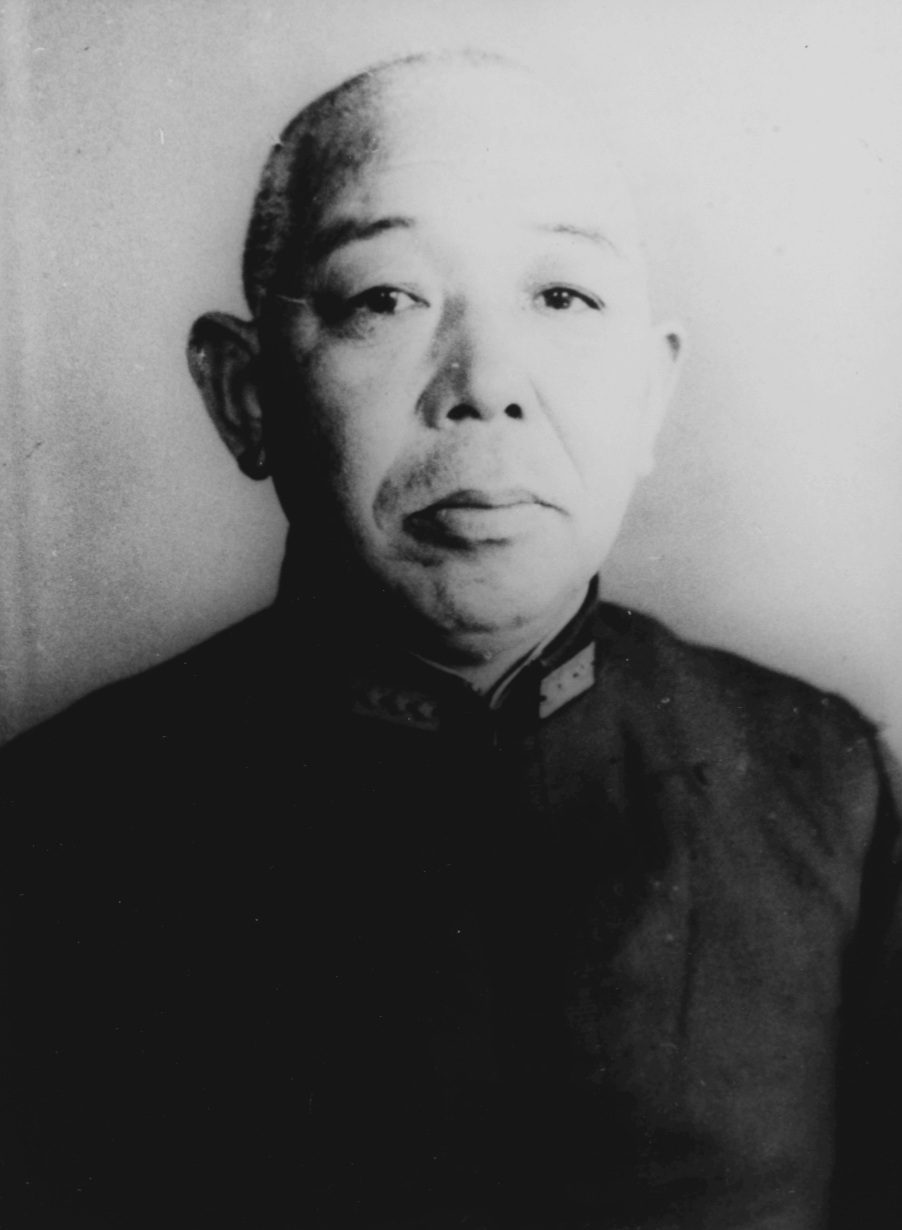 Shiro Kawase was a vice admiral in the Imperial Japanese Navy during World War II. He was a torpedo expert and his extensive experience as a commander of destroyers and destroyer formations made him more knowledgeable about the escort of convoys than most Japanese commanders of his time. He is best known for his command of the 5th Fleet during the latter stages of the Aleutians campaign in the spring and summer of 1943.