Following the death of Louis the Pious, Nominoë initially supported Charles the Bald in the dispute between him and his brothers over control of Frankish territory. However, when Count Ricuin of Nantes was killed at the Battle of Fontenoy, Charles refused to accept Lambert II as his successor, since Lambert's father, Lambert I, had fought against Charles. Charles replaced him with his supporter Renaud, Count of Herbauge. While Nominoë was ill, Renaud attacked Breton territory, but was killed in battle by the Bretons led by Erispoe, Nominoë's son, in alliance with Lambert. This allowed Lambert to occupy Nantes with the support of Nominoë. Recovered from his illness, Nominoë hoped to take advantage of the disorder to expand into Frankish territory.

On campaign in Aquitaine, Charles was initially unable to respond to the incursions. Learning of Charles's difficult military position in Toulouse, Nominoë continued his offensive, raiding Maine.

In 845, Charles concluded a peace with Pepin II of Aquitaine and was reconciled with Lambert II of Nantes, freeing him to deal with the threat from Nominoë. In November, he had intended to participate in a religious festival in Tours, but he decided to strike against Nominoë instead, having heard that a faction of discontented Bretons would defect to him if he hastened to their aid.

Charles quickly assembled an army of around 3,000 men. [1] Nominoë's men were probably much fewer in number, comprising mostly a highly-mobile light cavalry.

Nominoë lured the king into marshland at the confluence of the Oust and the Aff between Redon and Bains-sur-Oust, near Ballon Abbey - hence the name of the battle. The Bretons were then able to exploit their knowledge of this treacherous wetland territory.

Details of the events of the actual battle are sketchy. Reports simply state that Charles was defeated. According to the Annals of Saint-Bertin:

"Charles had recklessly attacked Gallic Britain [Brittany] with limited forces, slipping up by a reversal of fortune..." [2]

According to First Annales de Fontenelle:

"The Franks entered Brittany and engaged in battle with the Bretons, November 22. Helped by the difficulty of the wetland location, the Bretons proved the better." [3]

Following his defeat, rumors circulated that Charles had been killed, forcing him to make a quick public appearance in Maine. While there, he rebuilt his army and headed back towards Brittany late in 846. There he concluded a treaty with Nominoë, though the exact content of the agreement is unknown. Despite this a "cold war" persisted, and Breton raids continued into Frankish territory at Christmas of that year. Nevertheless, the agreement remained unbroken until 849.

This relatively minor battle is often confused with the much more decisive Battle of Jengland won by Nominoë's son Erispoe against Charles in 851. This confusion dates to Arthur de la Borderie's 1894 History of Brittany and has been repeated many times since. However, it is to the battle of Ballon that some date the birth of a unified and independent Brittany, behind a single sovereign: Nominoë. The expansionist policy of Nominoë, by the conquest of the former Marches of Brittany, a Frankish buffer zone, was continued by Erispoe, who consolidated the borders of medieval Brittany.

Year 843 (DCCCXLIII) was a common year starting on Monday of the Julian calendar. 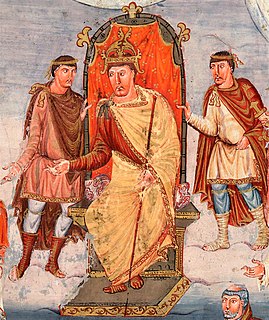 Charles ΙΙ the Bald was a 9th-century king of West Francia (843–877), king of Italy (875–877) and emperor of the Carolingian Empire (875–877). After a series of civil wars during the reign of his father, Louis the Pious, Charles succeeded, by the Treaty of Verdun (843), in acquiring the western third of the Carolingian Empire. He was a grandson of Charlemagne and the youngest son of Louis the Pious by his second wife, Judith. 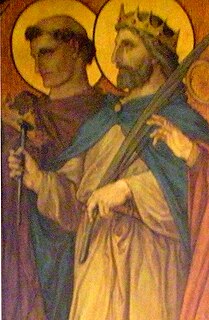 The Counts of Nantes were originally the Frankish rulers of the Nantais under the Carolingians and eventually a capital city of the Duchy of Brittany. Their county served as a march against the Bretons of the Vannetais. Carologinian rulers would sometimes attack Brittany through the region of the Vannetais, making Nantes a strategic asset. In the mid-ninth century, the county finally fell to the Bretons and the title became a subsidiary title of the Breton rulers. The control of the title by the Breton Dukes figured prominently in the history of the Duchy. The title Count of Nantes was given to Hoel, a disinherited son of a Duke. He lost the Countship due to a popular uprising. That uprising presented an opportunity for King Henry II of England to attack the Breton Duke. In the treaty ending their conflicts, the Breton Duke awarded the Countship of Nantes to Henry II. 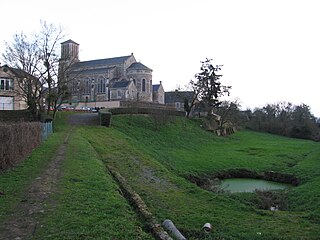 La Chapelle-Launay is a commune in the Loire-Atlantique department in Brittany, western France.

The Pays de Retz is a historical subregion of France that currently forms part of the Loire-Atlantique department, but which previously formed part of the Duchy of Brittany.

The Kingdom of Brittany was a short-lived vassal-state of the Frankish Empire that emerged during the Norman invasions. Its history begins in 851 with Erispoe's claim to kingship. In 856, Erispoe was murdered and succeeded by his cousin Salomon. The kingdom fell into a period of turmoil caused by Norman invasions and a succession dispute between Salomon's murderers: Gurvand and Pascweten. Pascweten's brother, Alan, called the Great, was the third and last to be recognized as king of Brittany. After his death, Brittany fell under Norman occupation. When Alan Twistedbeard, Alan the Great's grandson, reconquered Brittany in 939, Brittany became a duchy until its union with France in 1532.

The Battle of Toulouse in 844 was part of the campaign by Charles the Bald in Aquitaine to force the submission of Pepin II of Aquitaine, the rebellious son of Pepin, the half-brother of Charles. The historical context of this battle is the three-year Carolingian civil war, culminating in the Battle of Fontenay-en-Puisaye. Here Charles and Louis the German defeated their brother Lothair I, who retreated to the south with his army.