The Battle of Guanzhong (Chinese :關中攻防戰) occurred during the Taiping Revolution that took place in November 1861. When Taiping's Western Army was defeated at Wuhan, they lost their connection with their capital of Nanjing. Former Western Army Commander Chen Yucheng then decided to resupply at Guanzhong. Some of their soldiers were troops who once fought for the Nian Rebellion, so Yucheng decided not to provide them with supplies, as he was uncertain of their loyalty.

On August 22 the Xianfeng Emperor of the Qing Dynasty died at age 30. Gen. Guan Wen ordered the stationary Green Standard Army, consisting of 500,000 men, to move to Eastern Henan to guard the capital at Beijing.

However, the campaign began to look like an ambush to Chen. His uncle Chen Decai did not obey Chen's orders. In November Chen Decai directed an offensive in southern and western Henan that he easily won. The attack created a long front for the Taiping Western Army. At the time Chen Yucheng commanded only the remaining 50,000 of the Taiping Western Army and guarded its tail, but was surrounded by the 150,000-strong Qing army in Hefei.

When Chen Decai discovered it had been a trick he went back to save Chen Yucheng, but was too late. Chen Yucheng and his entire force were destroyed in May 1862.

The Battle of Anqing was intense and ended on September 5. Its loss cost the Western Army 90,000 men and severely affected their morale.

Chen Yucheng believed that they could recover Anqing in a short time, but his generals disagreed.

News of the death of the Xianfeng Emperor encouraged the Governor of Hubei, Hu Linyi, to attempt the recovery of Anqing for Qing. However, he died on September 30. This was good news for Chen Yucheng, because Hu Linyi was the most formidable of his enemies.

An important factor in the actions of the Western Army was their own fatigue after so many years of fighting. A series of defeats damaged troop morale, and so an escape from the fighting was desired. However, the supply of soldiers and food could have just been an excuse by Chen Yucheng.

The Taiping army had been raised three times in large-scale western offensives. The first was in Hunan and Hubei in 1853, led by Qin Rigang, Shi Dakai and Lai Hanying, with an army of over 300,000. The second offensive took place in Wuhan in 1855, led by Wei Jun, Chen Yucheng and Yang Fuqing; this offensive was the largest, with over 700,000 troops. The final was the Battle of Guanzhong in 1861.

The Chu–Han Contention was an interregnum between the Qin dynasty and the Han dynasty in Chinese history. Following the collapse of the Qin dynasty in 206 BC, Xiang Yu split the former Qin Empire into the Eighteen Kingdoms. Two major contending powers emerged, Western Chu and Han, which engaged in a struggle for supremacy over China. Western Chu was led by Xiang Yu, while the Han leader was Liu Bang. Several minor kings also warred, but these were largely independent of the main conflict between Western Chu and Han. The war ended in 202 BC with total victory for Han, with Liu Bang soon proclaiming himself first emperor of the Han dynasty. 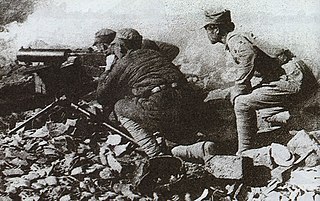 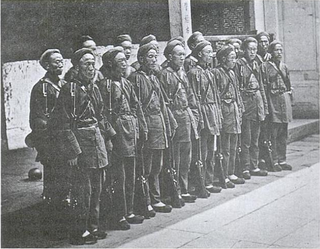 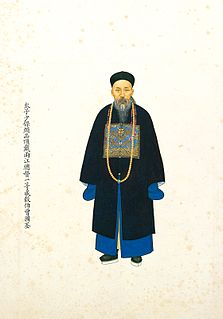 Ye Yunlai was a military leader of the Taiping Rebellion. He began his military career in the Jintian Uprising, later becoming a general, leading Taiping forces to many military victories. He was the chief commander defending Anqing city and never surrendered, ultimately dying in battle. He was awarded the E An in 1857. 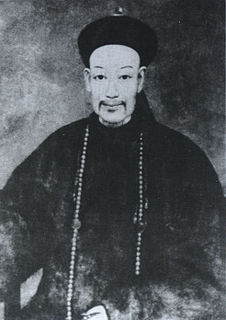 Hu Linyi (Chinese: 胡林翼; Wade–Giles: Hu2 Lin3-i1; July 14, 1812 - Sept 30, 1861) was a scholar and official during the late Qing Dynasty in China. He rose to prominence after being awarded the jinshi degree in the Imperial Civil Service Examinations in 1836, and in 1838 became a compiler of the Hanlin Academy in Beijing. After serving in several prefectural appointments in Guizhou, Hu was appointed the Governor of Hubei province in 1855. In that capacity, he merged multiple local militia groups to form a resistance force, the Hubei Army, to combat the Taiping Rebellion. He coordinated military efforts alongside other provincial leaders, such as Zeng Guofan and Zuo Zongtang. By 1857, Hu's Hubei Army was successful in recapturing Wuchang and much of Hubei from the Taiping. Deeply overworked by the campaign against the Taiping, however, Hu died in 1861 before the war's conclusion.

The Battle of Changsha was fought in the early years of the Taiping Rebellion throughout 1852. After defeating Qing forces in Guangxi, the Taipings advanced into neighboring Hunan province. The city was heavily defended and a delay in the Taiping advance allowed Qing forces to reinforce the city. The first attempt to advance north was stopped at an ambush at the Suoyi ford in the Xiang River, where over 10,000 Taiping sailors and soldiers were killed. 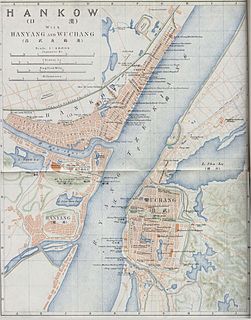 The Chiang-Gui War was a military conflict between the Nationalist government of Chiang Kai-shek against the warlord army of Guangxi that lasted from March until June 1929. A later conflict, the 2nd Chiang Gui-War, occurred between the two opposing factions in November and December of the same year.