The Battle of Río Bueno in 1759 was a military engagement between Spanish colonial forces and local Huilliche in the Bueno River of south-central Chile. The battle was fought on January 27 with the Spanish forces being led by Juan Antonio Garretón. [1] The battle of 1759 was an exception to the over-all policy of befriending indigenous communities on behalf of the Spanish authorities in Valdivia. [2]

After the battle captured Huilliche's told the Spanish about the existence of uncontacted Spanish settlements further inside indigenous territory, envigorating belief among the populace of Valdivia about the legendary City of the Caesars. [1] [2] Ignacio Pinuer, a staunch believer in existence of the city, was present in the battle of Río Bueno claiming "the Caesars" participated in the "Christian" side by attacking the indigenous rearguard at night, securing thus a Spanish victory. [3] 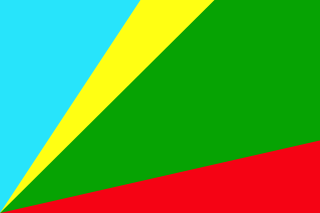 The Huilliche[wi.ˈʝi.tʃe], Huiliche or Huilliche-Mapuche are the southern partiality of the Mapuche macroethnic group of Chile. The Huilliche are the principal indigenous population of Chile from Toltén River to Chiloé Archipelago. According to Ricardo E. Latcham the term Huilliche started to be used in Spanish after the second founding of Valdivia in 1645, adopting the usage of the Mapuches of Araucanía for the southern Mapuche tribes. Huilliche means 'southerners' 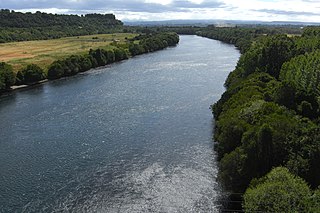 Bueno River is a river in southern Chile. It originates in Ranco Lake and like most of Chile rivers it drains into the Pacific Ocean at the southern boundary of the Valdivian Coastal Reserve. Its lower flow forms the border between Osorno Province and Ranco Province. Traditionally it marks also the northern boundary of the indigenous Huilliche territory known as Futahuillimapu. The river passes through Río Bueno commune and city that takes name from the river. 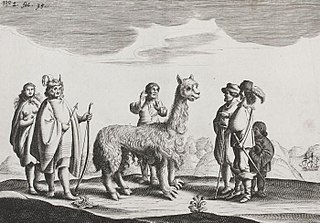 The Parliament of Las Canoas was a diplomatic meeting between Mapuche-Huilliches and Spanish authorities in 1793 held at the confluence of Rahue River and Damas River near what is today the city of Osorno. The parliament was summoned by the Royal Governor of Chile Ambrosio O'Higgins after the Spanish had suppressed an uprising by the Mapuche-Huilliches of Ranco and Río Bueno in 1792. The parliament is historically relevant since the treaty signed at the end of the meeting allowed the Spanish to reestablish the city of Osorno and secure the transit rights between Valdivia and the Spanish mainland settlements near Chiloé Archipelago. The indigenous signatories recognized the king of Spain as their sovereign but they kept considerable autonomy in the lands they did not ceded. The treaty is unique in that it was the first time Mapuches formally ceded territory to the Spanish.

In Colonial times the Spanish Empire diverted significant resources to fortify the Chilean coast as consequence of Dutch and English raids. The Spanish attempts to block the entrance of foreign ships to the eastern Pacific proved fruitless due to the failure to settle the Strait of Magellan and the discovery of the Drake Passage. As result of this the Spanish settlement at Chiloé Archipelago became a centre from where the west coast of Patagonia was protected from foreign powers. In face of the international wars that involved the Spanish Empire in the second half of the 18th century the Crown was unable to directly protect peripheral colonies like Chile leading to local government and militias assuming the increased responsibilities.

Juan Antonio Garretón was a Spanish army officer who served in different positions in Colonial Chile and Chiloé. 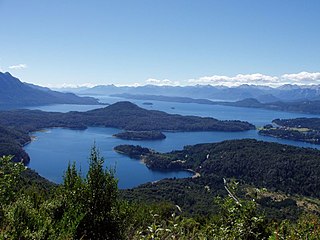 The Mission of Nahuel Huapi was an intermittent Jesuit mission that existed in colonial times on the shores of Nahuel Huapi Lake, northern Patagonia. The exact locations of the missions are not known but it has been suggested, based on a Christian grave finding, that the mission of the early 18th century was located in Huemul Peninsula.

The Mapuche uprising of 1655 was series of coordinated Mapuche attacks against Spanish settlements and forts in colonial Chile. It was the worst military crisis in Chile in decades, and contemporaries even considered the possibility of a civil war among the Spanish. The uprising marks the beginning of a ten-year period of warfare between the Spanish and the Mapuche.

The Antonio de Vea expedition of 1675–1676 was a Spanish naval expedition to the fjords and channels of Patagonia aimed to find whether rival colonial powers—specifically, the English—were active in the region. While this was not the first Spanish expedition to the region, it was the largest up to then, involving 256 men, one ocean-going ship, two long boats and nine dalcas. Suspicion about English bases in Patagonia was dispelled by the expedition. Spanish authorities' knowledge of western Patagonia was greatly improved by the expedition, yet Spanish interest in the area waned thereafter until the 1740s. 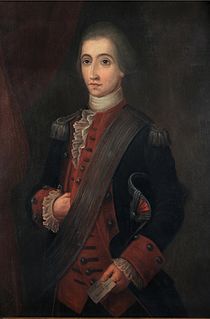 Tomás de Figueroa y Caravaca was a Spanish soldier was active in the military outpost of Valdivia and later in Santiago as a royalist during the early phase of the Chilean struggle for independence. He was born in Estepona near Málaga in southern Spain. A soldier by profession he had to migrate Chile in 1775 after having killed a man in a duel in Spain. In late 1792 he led Spanish forces that suppressed a Huilliche uprising around Río Bueno and Futahuillimapu in southern Chile. After leading a mutiny to restore colonial order in Santiago on April 1, 1811 he was summarily executed on the orders of pro-independence leader Juan Martínez de Rozas.