The Battle of Tétouan (Spanish Tetuán) was fought in 1860, near Tétouan, Morocco, between a Spanish army sent to North Africa and the tribal levies which at the time made up the Moroccan Army. The battle was part of the Spanish-Moroccan War of 1859-1860.

The Spanish expeditionary force, which departed from Algeciras, was composed of 36,000 men, 65 pieces of artillery, and 41 ships, which included steamships, sailboats, and smaller vessels. General Leopoldo O'Donnell personally took charge of the expedition and divided these forces into three corps. These were commanded by General The 5th Marqués de Torreblanca, General Antonio Ros de Olano and General Ramón de Echagüe. Reserves were placed under the command of General The 1st Conde de Reus. Admiral Segundo Díaz Herrero commanded the fleet.

The objective of the Spanish forces was to take Tetuán, which had served as a base for raids on Ceuta and Melilla .

Hostilities between Moroccan and Spanish troops began on 17 December 1859 when the column commanded by The Marqués de Torreblanca occupied the Sierra de Bullones. On 19 December, Echagüe captured the Palacio del Serrallo. The Conde de Lucena commanded a force that landed at Ceuta on 21 December. By Christmas Day, the three columns had consolidated their positions and awaited orders to advance towards Tetouan.

On 1 January 1860, the Conde de Reus advanced towards the port of Guad al Gelu. The Marqués de Torreblanca’s column and the Royal Spanish Navy guarded his flank. Clashes continued until 31 January 1860, when a major Moroccan offensive was stopped. The Conde de Lucena began a march towards the objective of Tétouan, and was supported by forces composed of Catalan volunteers. Covering fire was provided by units commanded by General The Conde de Reus and General Ros de Olano. Spanish artillery inflicted heavy losses on the Moroccan ranks; the Moroccan forces that remained took refuge in Tétouan. The city fell on 6 February 1860. A week of further fighting followed before hostilities ceased.

The capture of Tétouan prevented further attacks on Ceuta and Melilla by Moroccan forces. The Conde de Lucena returned with his troops to Spain; they camped at a spot north of Madrid while a triumphal entry into the capital was arranged. The camp, which acquired permanent structures as well as shops over time, became the Madrid neighbourhood known as Tetuán de las Victorias. In the aftermath of the battle, General Leopoldo O'Donnell, 1st Conde de Lucena, was elevated in the Spanish peerage to being The 1st Duque de Tetuán. He later served as President of the Council of Ministers (also known as the Prime Minister).

Salvador Dalí painted a version of Fortuny’s painting of the battle. [1] [2]

The Spanish victory was carved and painted on the pediment of the Church of San Joaquín, Iloilo, considered a militarist-themed church in the Philippines. It was declared a national historical site in 1974. It was built in 1859 and completed in 1869 by the Spanish friar Tomas Santaren of the Augustinian Order. [3] 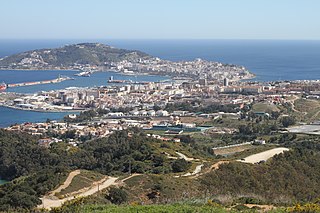 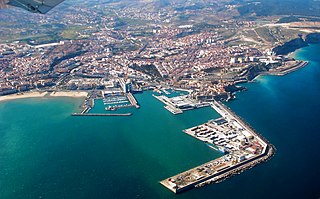 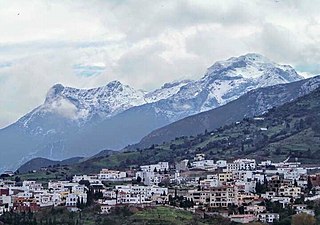 Tétouan, nicknamed the White Dove, is a city located in northern Morocco. It lies along the Martil Valley and is one of the two major ports of Morocco on the Mediterranean Sea, a few miles south of the Strait of Gibraltar, and about 60 km (40 mi) E.S.E. of Tangier. In the 2014 Moroccan census, the city recorded a population of 380,787 inhabitants. It is part of the administrative division Tanger-Tetouan-Al Hoceima.

Juan Prim y Prats, 1st Count of Reus, 1st Marquess of los Castillejos, 1st Viscount of Bruch was a Spanish general and statesman who was briefly Prime Minister of Spain until his assassination. 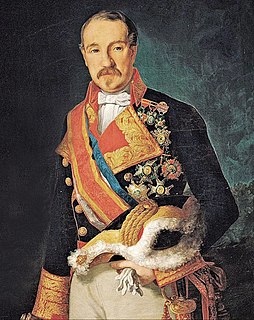 Leopoldo O'Donnell y Jorris, 1st Duke of Tetuán, GE, was a Spanish general and statesman who was Prime Minister of Spain on several occasions.

MoulayMuhammad ibn Abd al-Rahman, also known as Muhammad IV was the Sultan of Morocco from 1859 to 1873. He was a member of the Alaouite dynasty.

Moghreb Athlétic de Tétouan is a Moroccan football club based in Tetouan. MA Tétouan was founded in 1922 and used to compete in the Spanish leagues under the names Athletic Club Tetuán (1922–1947) and Club Atlético de Tetuán (1947–1956) till 1956 when Morocco gained independence from Spain as the club made the transition to the Moroccan league after the club split in two forming Moghreb Atlético Tetuàn (Moroccan) and AD Ceuta FC (Spanish).

The Hispano-Moroccan War, also known as the Spanish–Moroccan War, the First Moroccan War, the Tetuán War, or, in Spain, as the African War, was fought from Spain's declaration of war on Morocco on 22 October 1859 until the Treaty of Wad-Ras on 26 April 1860. It began with a conflict over the borders of the Spanish city of Ceuta and was fought in northern Morocco. Morocco sued for peace after the Spanish victory at the Battle of Tetuán.

Juan Picasso González was a Spanish military man and general who participated in the Rif War with the Spanish Army of Africa in late 19th century and early 20th century. He was a military investigation instructor known for "Expediente Picasso" (Picasso Files), an investigation report related to the historical defeat of the Spanish Army, some 20,000 soldiers and officers, of which some 8,000 were killed, against the Riffian rebels at the Battle of Annual, on July 1,1921; known as The disaster of Annual.

Sania Ramel Airport is an airport serving Tétouan, a city in the Tanger-Tetouan-Al Hoceima region in Morocco. It is also the closest airport to the Spanish city of Ceuta. The airport served over 15,000 passengers in the year 2008. 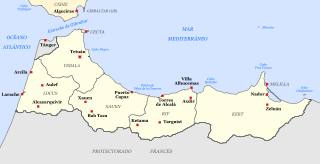 The July 1936 military uprising in Melilla occurred at the start of the Spanish Civil War. The rebels seized the main garrisons of the Spanish Army in Africa and by 18 July had crushed the resistance of the army officers loyal to the Republican government. The supporters of the Second Spanish Republic were detained or shot. 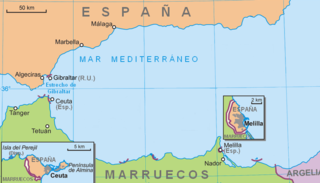 The 2007 Morocco–Spain diplomatic conflict was a short-lived disturbance of international relations between Morocco and Spain that arose after the announcement of the impending visit of the King of Spain to the Spanish-ruled autonomous cities Ceuta and Melilla, which are claimed by Morocco. 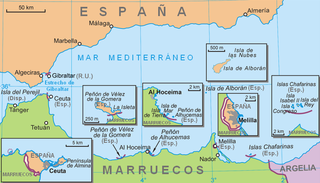 The history of Tétouan stretches over 2000 years to its origins as a Mauretanian Berber settlement named Tamuda, located at near present-day Tetouan by the south bank of the Martil Valley. The site later became a Phoenician trading post. During the time of Emperor Augustus, Tamuda became part of Roman province Mauritania Tingitana.

The San Joaquin Parish Church, commonly known as San Joaquin Church, is a Roman Catholic Church in the municipality of San Joaquin, Iloilo, Philippines within the jurisdiction of the Roman Catholic Archdiocese of Jaro. It is largely known for its pediment featuring a military scene, the Spanish victory over the Moors in the Battle of Tétouan. The church was declared a National Cultural Treasure by the National Museum of the Philippines.

Abu al-Hassan Ali al-Mandari al-Garnati, also known as Almandari, Almandali, Al-Mandri I and Sidi al-Mandri, was the re-founder of the city of Tetouan in Morocco. He was born in Granada, Spain in the 15th century A.D. and died in Tétouan on an unknown date between 1515 and 1541. 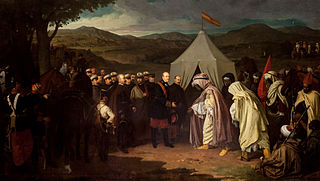 The Treaty of Wad Ras was a treaty between Morocco and Spain, signed at the end of the Tetuan War on April 26, 1860 at Wad Ras, located between Tetuan and Tangier. The conditions of the treaty exacerbated Morocco's defeat in the war, with major concessions to Spain. Morocco was forced to pay a 20 million duro indemnity—far greater the balance of the Makhzen's treasury; the territories of the Spanish exclaves of Ceuta and Melilla were extended further into Moroccan territory; and Sidi Ifni became a Spanish possession.