Battles of the Isonzo

The Battles of the Isonzo (known as the Isonzo Front by historians, Slovene : soška fronta) were a series of 12 battles between the Austro-Hungarian and Italian armies in World War I mostly on the territory of present-day Slovenia, and the remainder in Italy along the Isonzo River on the eastern sector of the Italian Front between June 1915 and November 1917.

In April 1915, in the secret Treaty of London, Italy was promised by the Allies some of the territories of Austro-Hungarian Empire which were mainly inhabited by ethnic Slovenes.

Italian Field Marshal Luigi Cadorna, a staunch proponent of the frontal assault, initially planned breaking onto the Slovenian plateau, taking Ljubljana and threatening Vienna.[ citation needed ] The area between the northernmost part of the Adriatic Sea and the sources of the Isonzo River thus became the scene of twelve successive battles.[ citation needed ]

As a result, the Austro-Hungarians were forced to move some of their forces from the Eastern Front and a war in the mountains around the Isonzo River began. [2]

The sixty-mile long Soča River at the time ran entirely inside Austria-Hungary in parallel to the border with Italy, from the Vršič and Predil passes in the Julian Alps to the Adriatic Sea, widening dramatically a few kilometers north of Gorizia, thus opening a narrow corridor between Northern Italy and Central Europe, which goes through the Vipava Valley and the relatively low north-eastern edge of the Karst Plateau to Inner Carniola and Ljubljana. The corridor is also known as the "Ljubljana Gate".

By the autumn of 1915 one mile had been won by Italian troops, and by October 1917 a few Austro-Hungarian mountains and some square miles of land had changed hands several times. Italian troops did not reach the port of Trieste, the Italian General Luigi Cadorna's initial target, until after the Armistice. [3]

With the rest of the mountainous 400-mile length of the Front being almost everywhere dominated by Austro-Hungarian forces, the Soča (Isonzo) was the only practical area for Italian military operations during the war. The Austro-Hungarians had fortified the mountains [ citation needed ] ahead of the Italians' entry into the war on 23 May 1915.

Italian Chief of Staff Luigi Cadorna judged that Italian gains (from Gorizia to Trieste) were most feasible at the coastal plain east of the lower end of the Soča (Isonzo). However he also believed that the Italian army could strike further north and bypass the mountains on either side of the river so as to come at the Austro-Hungarian forces from the rear.

Cadorna had not expected operations in the Isonzo sector to be easy. He was well aware that the river was prone to flooding — and indeed there were record rainfalls during 1914–18.

In the south (along the coastal zone) geographic peculiarities, including an array of ridges and valleys, also gave an advantage to the Austro-Hungarian defenders.

Despite the huge effort and resources poured into the continuing Isonzo struggle, the results were invariably disappointing and without real tactical merit, particularly given the geographical difficulties that were inherent in the campaign.

Cumulative casualties of the numerous battles of the Isonzo were enormous. Half of the entire Italian war death total — some 300,000 of 600,000 — were suffered along the Soča (Isonzo). Austro-Hungarian losses, while by no means as numerous, were nevertheless high at around 200,000 (of an overall total of around 1.2 million casualties). [4]

More than 30,000 casualties were ethnic Slovenes, the majority of them being drafted into the Austro-Hungarian Army, while Slovene civilian inhabitants from the Gorizia and Gradisca region also suffered in many thousands because they were resettled in refugee camps where Slovene refugees were treated as state enemies by Italians, and some thousands died of malnutrition in Italian refugee camps. [5]

With almost continuous combat in the area, the precise number of battles forming the Isonzo campaign is debatable. Some historians have assigned distinct names to a couple of the Isonzo struggles, most notably at Kobarid (Caporetto) in October 1917, which would otherwise form the Twelfth Battle of the Isonzo.

The fact that the battles were always named after the Isonzo River, even in Italy, was considered by some a propaganda success for Austria-Hungary: it highlighted the repeated Italian failure to breach this landmark frontier of the Empire. [6] 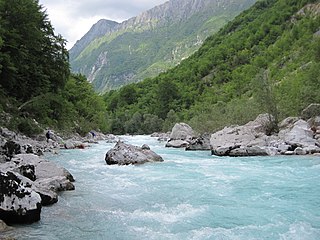 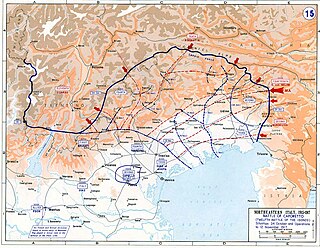 The Battle of Caporetto was a battle on the Italian front of World War I. 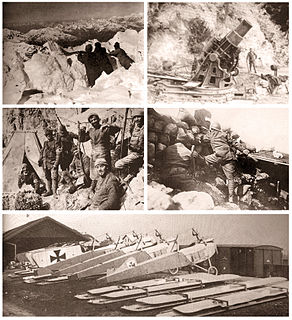 The Italian front or Alpine front involved a series of battles at the border between Austria-Hungary and Italy, fought between 1915 and 1918 in the course of World War I. Following secret promises made by the Allies in the 1915 Treaty of London, Italy entered the war aiming to annex the Austrian Littoral, northern Dalmatia, and the territories of present-day Trentino and South Tyrol. Although Italy had hoped to gain the territories with a surprise offensive, the front soon bogged down into trench warfare, similar to that on the Western Front in France, but at high altitudes and with very cold winters. Fighting along the front displaced much of the local population, and several thousand civilians died from malnutrition and illness in Italian and Austro-Hungarian refugee-camps. The Allied victory at Vittorio Veneto in November 1918, the disintegration of Austria-Hungary and the Italian capture of Trento, Bolzano and Trieste ended the military operations. Italy also refers to the Great War as the "Fourth War of Independence", which completed the last stage of Italian unification. 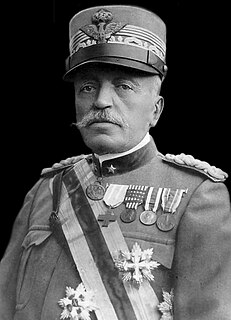 Marshal of Italy Luigi Cadorna, was an Italian General and Marshal of Italy, most famous for being the Chief of Staff of the Italian Army during the first part of World War I. Because of the multiple and consecutive failed attacks led by him, the large amount of casualties incurred among his own men, and his personal reputation as disproportionately bitter and ruthless, Cadorna is often considered one of the conflict's worst military generals.

The Sixth Battle of the Isonzo also known as the Battle of Gorizia was the most successful Italian offensive along the Soča (Isonzo) River during World War I. 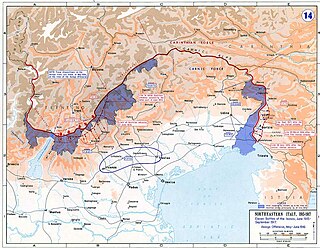 The First Battle of the Isonzo was fought between the Armies of Italy and Austria-Hungary on the Italian Front in World War I, between 23 June and 7 July 1915.

The Second Battle of the Isonzo was fought between the armies of the Kingdom of Italy and of Austria-Hungary in the Italian Front in World War I, between 18 July and 3 August 1915.

The Third Battle of the Isonzo was fought from 18 October through 4 November 1915 between the armies of Italy and Austria-Hungary.

The Battle of Doberdò was fought in August 1916 between the Italian and Austro-Hungarian Armies, composed mostly of Hungarian and Slovenian regiments. The battle, which was part of the Sixth Battle of the Isonzo, took place on a strategic area the westernmost edge of the Karst Plateau. The Italians, who conquered the lowland area around Monfalcone and Ronchi, tried to force themselves over the Karst Plateau in order to gain control over the main road linking the port city of Trieste to the town of Gorizia. After fierce fighting and huge casualties, they succeeded in their attempts. The Austro-Hungarian forces retreated and Gorizia fell to the Italians. They, however, didn't succeed in forcing their way to Trieste, and were stopped northwest of Duino. 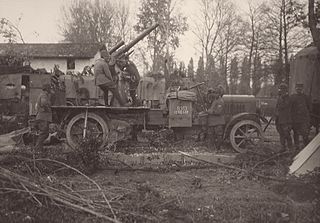 The Eleventh Battle of the Isonzo was a World War I battle fought by the Italian and Austro-Hungarian Armies on the Italian Front between 18 August and 12 September 1917.

This article is about Italian military operations in World War I.

The Fourth Battle of the Isonzo was fought between the armies of Kingdom of Italy and those of Austria-Hungary on the Italian Front in World War I, between November 10 and December 2, 1915.

The Fifth Battle of the Isonzo was fought from March 9–15, 1916 between the armies of the Kingdom of Italy and those of Austria-Hungary. The Italians had decided to launch another offensive on the Soča (Isonzo) River. 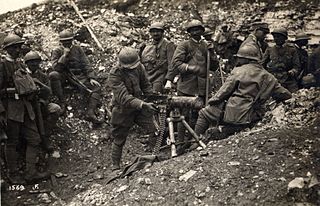 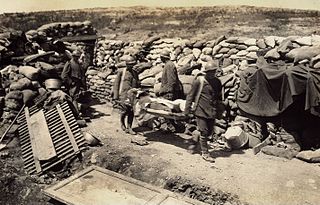 The Eighth Battle of the Isonzo was fought from October 10–12, 1916 between Italy and Austria-Hungary.

The Ninth Battle of the Isonzo was an Italian offensive against Austria-Hungary in the course World War I. Including a triumvirate of battles launched after the Italians' successful seizure of Gorizia in August 1916 to extend their bridgehead to the left of the town, it ended in further failure for the Italian Chief of Staff Luigi Cadorna.

The Tenth Battle of the Isonzo was an Italian offensive against Austria-Hungary during World War I.