Bawtry was originally the site of a Roman settlement on Ermine Street between Doncaster and Lincoln. In AD 616, the Anglo-Saxon King Aethelfrith died in battle against Raedwald, King of East Anglia, by the River Idle at Bawtry. The site in Aethelfrith's time lay in the southern reaches of Northumbria, a dangerous marshy region close to the border with Lindsey and easily accessible from the Kingdom of East Anglia.[ citation needed ]

A settlement developed here around a wharf in the Danelaw era. Evidence suggests that St Nicholas's Church was first erected in that period. While the village originally lay in Nottinghamshire, boundary changes before the Norman conquest moved it just inside the West Riding of Yorkshire. [6]

Around 1200, a new town was developed adjacent to the older village, under the auspices of John de Busli or Robert de Vipont. In 1213, de Vipont received a royal charter specifying an annual four-day fair at Pentecost, and a market was first recorded in 1247. The town grew as a river port and as a local commercial centre and stopping point between Doncaster and Retford. By the mid-14th century, the port was exporting wool and other items overseas. Meanwhile the Hospital of St Mary Magdalene was founded, which survived until the 18th century. [6]

Trading in Bawtry later declined and by the 1540s John Leland recorded it as being "very bare and pore", but it grew again in the Elizabethan period through the shipping of millstones. [6]

Bawtry Hall was the base for RAF No.1 Group Bomber Command during and after the Second World War, and became the headquarters of RAF Strike Command (see RAF Bawtry).

Bawtry is where the western branch of the Roman Ermine Street crosses the River Idle in the Metropolitan Borough of Doncaster, South Yorkshire. It straddles the A638 road, previously the Great North Road.

Nearby towns include Gainsborough to the east, Retford to the south-southeast, Worksop to the south-west and Doncaster to the north-west. The town is just south of Doncaster Sheffield Airport, formerly RAF Finningley, and between Bircotes and Misson at the conjunction of the A614, A631 and A638. In the 20th century Bawtry became a bottleneck, until a bypass was eventually built in 1965. The county boundary with Nottinghamshire runs just to the south of the town – the southernmost house on the Great North Road names itself "Number One Yorkshire".

The town's former prosperity was based on communications: the River Idle when it was a port, the Great North Road in the coaching era, and the Great Northern Railway. Its geographical location is 53° 25' 40" North, 1° 1' West, at an elevation of some 65 feet (20 m) above sea level.

Bawtry has a school called Bawtry Mayflower School named after the vessel Mayflower , which took William Bradford, leader of the Pilgrims, to the Americas, settling the first Plymouth Colony. Bradford came from Austerfield, about a mile from Bawtry.

The White Hart in Swan Street is the town's oldest surviving public house, dating from 1689. The older Swan Inn in the same street has been converted to other uses. Market Hill and High Street contain buildings of the same period, interspersed with more recent ones. The Crown Hotel in High Street was once a coaching inn. Singer Ronan Keating and comedian Billy Connolly have stayed there. [7]

South Parade is a terrace of Georgian houses. The Courtyard, a modern development of housing, shops and businesses, won the Green Apple Awards 2005. [8]

From 1989 to 2013 Bawtry Hall operated as a Christian conference centre and a base for several Christian bodies. It now serves for a wider range of events such as wedding receptions. [9]

Retford, also known as East Retford, is a market town in Nottinghamshire, and one of the oldest market towns in England having been granted its first charter in 1105. It lies on the River Idle and the Chesterfield Canal passes through its centre. Retford is 26 miles (42 km) east of Sheffield, 23 miles (37 km) west of Lincoln and 31 miles (50 km) north-east of Nottingham. The population at the 2011 census was 22,013.

Tickhill is a town and civil parish in the Metropolitan Borough of Doncaster in South Yorkshire, England, on the border with Nottinghamshire. At the 2001 census it had a population of 5,301, reducing to 5,228 at the 2011 Census. 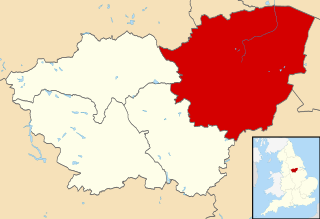 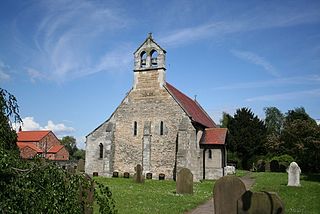 Austerfield is a village and civil parish in the Metropolitan Borough of Doncaster, on the border with Nottinghamshire. It lies less than a mile to the north-east of Bawtry on the A614 road to Finningley. It is adjacent to the hamlet of Newington in Nottinghamshire, and close to the River Idle. The population in 2001 was 571, which fell to 536 at the 2011 Census. 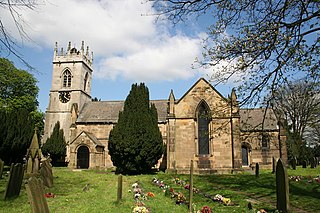 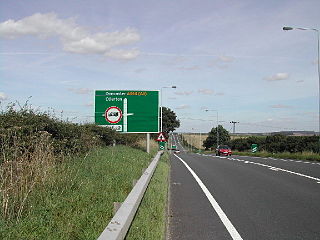 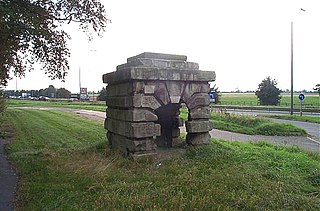 Barnsdale, or Barnsdale Forest, is an area of South Yorkshire, England. The area falls within the Whitley Ward of the Wakefield Metropolitan Council. Barnsdale is historically part of the West Riding of Yorkshire. Barnsdale lies in the immediate vicinity north and northwest of Doncaster, and which was formerly forested and a place of royal hunts, and also renowned as a haunt of the outlaw Robin Hood in early ballads. 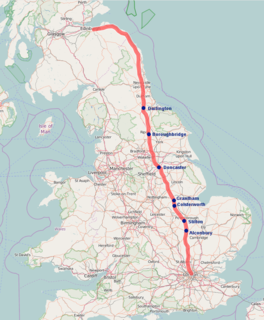 The Great North Road was the main highway between England and Scotland from medieval times until the 20th century. It became a coaching route used by mail coaches travelling between London, York and Edinburgh. The modern A1 mainly parallels the route of the Great North Road. Coaching inns, many of which survive, were staging posts providing accommodation, stabling for horses and replacement mounts. Nowadays virtually no surviving coaching inns can be seen while driving on the A1, because the modern route bypasses the towns in which the inns are found. 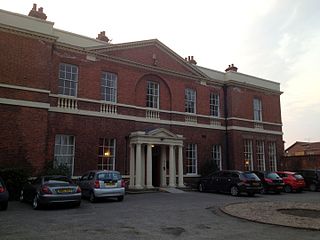 The A638 is a main road in England that runs between the A1 at Markham Moor in Nottinghamshire and Chain Bar Junction 26 of the M62 motorway south of Bradford in West Yorkshire.

Misterton is a village and civil parish in the Bassetlaw district of Nottinghamshire, England. The parish population at the 2011 census was 2,140, estimated at 2,145 in 2019.

Mattersey is a village in Nottinghamshire, England. It is located about 6 miles north of Retford and sits close to the border of Nottinghamshire and South Yorkshire, being just under 13 miles from Doncaster. According to the 2001 census it had a population of 779, increasing to 792 at the 2011 Census.

Gamston is a village and civil parish four miles south of Retford in the English county of Nottinghamshire. The village lies on the A638 road between Retford and the Markham Moor junction with the A1 and the A57 roads. The population of the civil parish as at the 2011 Census was 246. The River Idle lies to the west of the village.

Bawtry railway station was situated to the east of the town of Bawtry, South Yorkshire, England on the Great Northern Railway main line between Retford and Doncaster.

The A1500 is an 'A' road entirely within the English county of Lincolnshire. It links the A156 at Marton with the A15 south of RAF Scampton via Sturton by Stow. 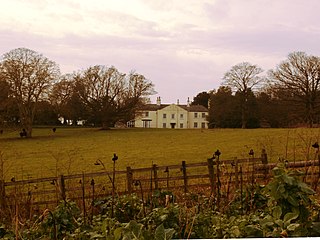 Scaftworth is a hamlet and civil parish within the Bassetlaw district of north Nottinghamshire, England.