It is not to be confused with the Beacon Street in nearby Somerville or others elsewhere.

Beacon Street begins as a one-way street from the intersection of Tremont Street and School Street. From this point, it rises up Beacon Hill for a block where it meets Park Street in front of the Massachusetts State House. From that intersection it descends Beacon Hill as a two-lane, bi-directional street until it reaches Charles Street. At Charles Street, it becomes a one-way avenue that runs through the Back Bay neighborhood until it reaches Kenmore Square.

From Kenmore Square, Beacon Street skirts the area around Fenway Park and follows a southwesterly slant through Brookline along either side of the MBTA Green Line trolley tracks to Cleveland Circle in Brighton. From there it passes through Chestnut Hill, including the Chestnut Hill Reservoir and Boston College. It winds its way into the city of Newton, where it crosses Centre Street to form the defining intersection of Newton Centre, meets Walnut Street at "Four Corners" near the Newton Cemetery, and goes through Waban at its intersection with Woodward Street. It ends at Washington Street near Boston's circumferential highway, Route 128.

Beacon Street initially formed the northern limit of Boston Common, and was extended over the Charles River Basin as a dam that would later form the shore between a narrowed river and the newly filled-in Back Bay neighborhood. The part of Beacon Street west of Kenmore Square was originally laid out in 1850. Railroad tracks were first laid in 1888 for what would eventually become the modern Green Line C branch.

In July 2020, the state awarded $32,000 for a feasibility study and conceptual design of restoration of the original bridle path, which ran along the median of the Brookline portion. [1] Brookline is a town in Norfolk County, Massachusetts in the United States, and is a part of Greater Boston. Brookline borders six of Boston's neighborhoods: Brighton, Allston, Fenway–Kenmore, Mission Hill, Jamaica Plain, and West Roxbury. The city of Newton lies to the west of Brookline. 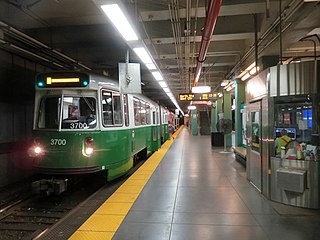 Kenmore Square is a square in Boston, Massachusetts, United States, consisting of the intersection of several main avenues as well as several other cross streets, and Kenmore station, an MBTA subway stop. Kenmore Square is close to or abuts Boston University and Fenway Park, and it features Lansdowne Street, a center of Boston nightlife, and the Citgo sign. It is also the eastern terminus of U.S. Route 20, the longest U.S. Highway. 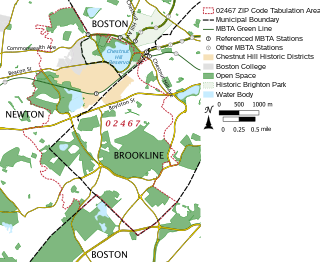 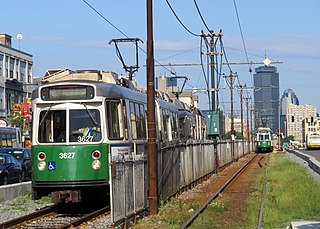 The D branch of the Massachusetts Bay Transportation Authority's Green Line, also known as the Highland branch or the Riverside Line, is a light rail line in west Boston, Massachusetts, with stations also located in Brookline and Newton. It branches off near Kenmore Square from the Tremont Street and Boylston Street subways from downtown shared with the other light rail lines. It then continues west for about ten miles on a private surface right of way, formerly the Highland branch of the Boston and Albany Railroad. The right of way is double tracked throughout without express tracks. It is grade separated from roads and highways, though there are pedestrian crossings at stations and in Webster Conservation Area in Newton. 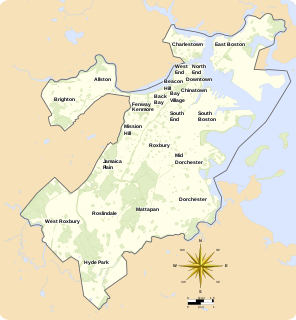 Boston's diverse neighborhoods serve as a political and cultural organizing mechanism. The City of Boston's Office of Neighborhood Services has designated 24 Neighborhoods in the city: 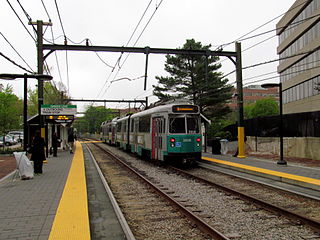 Myles Standish Hall is a Boston University dormitory located at 610 Beacon Street, in Kenmore Square. Originally constructed in 1925 and opened as the Myles Standish Hotel, it was deemed to be one of the finest hotels in the world. In 1949 BU acquired the building and converted it into a dormitory. 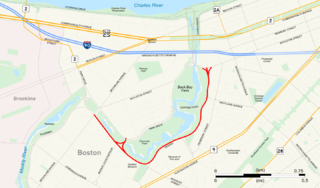 Fenway, commonly referred to as The Fenway, is a mostly one-way, one- to three-lane parkway that runs along the southern and eastern edges of the Back Bay Fens in the Fenway–Kenmore neighborhood of Boston, in the east-central part of the U.S. state of Massachusetts. As part of the Emerald Necklace park system mainly designed by Frederick Law Olmsted in the late 19th century, the Fenway, along with the Back Bay Fens and Park Drive, connects the Commonwealth Avenue Mall to the Riverway. For its entire length, the parkway travels along the Muddy River and is part of the Metropolitan Park System of Greater Boston. Like others in the park system, it is maintained by the Massachusetts Department of Conservation and Recreation.

Lansdowne station is an MBTA Commuter Rail station in Boston, Massachusetts. It serves the Framingham/Worcester Line. It is located next to the Massachusetts Turnpike in the Fenway–Kenmore neighborhood near Kenmore Square, below grade between Beacon Street and Brookline Avenue.

Brookline Avenue is a principal urban artery in the city of Boston, Massachusetts, terminating in the town of Brookline. The Landmark Center, Fenway Park, Emmanuel College, Longwood Medical and Academic Area and Kenmore Square are sites along its length. It runs from Kenmore Square in the Fenway-Kenmore neighborhood, forming a 1.5-mile straight line to its other terminus at Washington Street in the Brookline Village neighborhood of Brookline, Massachusetts. 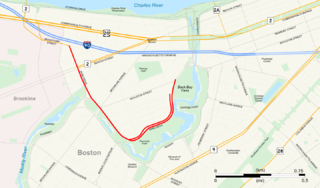 Park Drive is a mostly one-way, two-lane parkway in the Fenway-Kenmore neighborhood of Boston that runs along the northern and western edges of the Back Bay Fens before ending at Mountfort Street. As part of the Emerald Necklace park system mainly designed by Frederick Law Olmsted in the late 19th century, Park Drive, along with the Back Bay Fens and the Fenway, connects the Commonwealth Avenue Mall and Boylston Street to Beacon Street and the Riverway. For a portion of its length, the parkway runs along the Muddy River and is part of the Metropolitan Park System of Greater Boston's Muddy River Reservation. Like others in the park system, it is maintained by the Massachusetts Department of Conservation and Recreation. 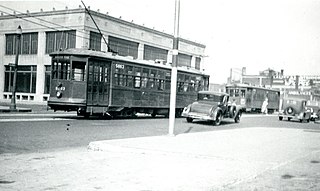 Template:Attached KML/Beacon Street
KML is from Wikidata
This page is based on this Wikipedia article
Text is available under the CC BY-SA 4.0 license; additional terms may apply.
Images, videos and audio are available under their respective licenses.