"Beatles", written by Sven Olov Bagge  [ sv ] and Claes Bure  [ sv ], was the song that, performed by Swedish dansband Forbes, won the Swedish Melodifestivalen 1977. The song's lyrics are about the popular 1960s British rock group the Beatles and include the phrase "Yeah, yeah, yeah" as an homage to the Beatles song "She Loves You". Forbes took the song to the United Kingdom to represent Sweden at the Eurovision Song Contest 1977, with Anders Berglund as conductor. The audience cheered at the song, not unexpectedly since the contest took place in the United Kingdom, but the jury had another opinion. The song finished last, with only two points, from West Germany. 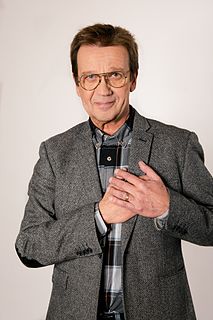 The Eurovision Song Contest 1961 was the 6th edition of the Eurovision Song Contest. It took place in Cannes, France, following the country's victory at the 1960 contest with the song "Tom Pillibi" by Jacqueline Boyer. It was the second time that France had hosted the contest; the first being in 1959 - also in Cannes. The contest was held at Palais des Festivals et des Congrès on 18 March 1961 and was the first to take place on a Saturday night, a tradition that has continued into modern times. The show was hosted by Jacqueline Joubert.

The Eurovision Song Contest 1965 was the 10th edition of the Eurovision Song Contest. It took place in Naples, Italy, following the country's victory at the 1964 contest with the song "Non ho l'età" by Gigliola Cinquetti. It was the first time the contest took place in Italy, also marking the first time the Italian Peninsula and Southern European country hosted the event. The contest was held at Sala di Concerto della RAI on Saturday 20 March 1965, and was hosted by Renata Mauro.

The Eurovision Song Contest 1977 was the 22nd edition of the annual Eurovision Song Contest. It took place in London, United Kingdom, following Brotherhood of Man's win at the 1976 contest in The Hague, Netherlands with the song "Save Your Kisses for Me". It was the sixth time the UK had hosted the contest, having previously done so in 1960, 1963, 1968, 1972, and 1974. Organised by the European Broadcasting Union (EBU) and host broadcaster British Broadcasting Corporation (BBC), the contest was held at the Wembley Conference Centre, with the final on Saturday 7 May 1977, marking the first time the event took place in the month of May since the first contest in 1956. The live show was hosted by Angela Rippon. 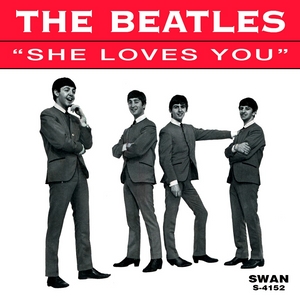 "She Loves You" is a song written by John Lennon and Paul McCartney and recorded by English rock band the Beatles for release as a single in 1963. The single set and surpassed several sales records in the United Kingdom charts, and set a record in the United States as one of the five Beatles songs that held the top five positions in the charts simultaneously, on 4 April 1964. It remains the band's best-selling single in the United Kingdom and the top-selling single of the 1960s there by any artist. 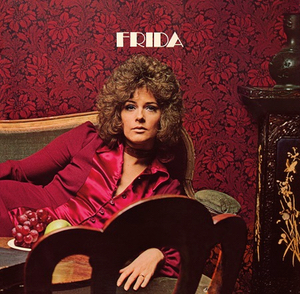 Frida is the debut studio album by Swedish singer Anni-Frid Lyngstad, released on March 1971 by EMI Columbia. Recorded between September 1970 and January 1971, Frida was produced by her then-fiancé, Benny Andersson. Frida was her only album recorded for EMI during her contract, not counting her eponymous compilation album from 1972, before being signed to Polar and form with the Swedish pop group ABBA, a year later.

Chips was a Swedish country group formed in Sweden in 1979.

"Colorado" was the Dutch entry in the Eurovision Song Contest 1979, performed in Dutch by the six-piece group Xandra, fronted by Sandra Reemer. 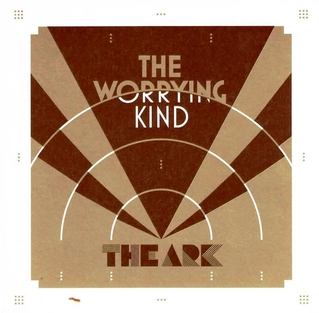 "The Worrying Kind" is a rock song performed by the Ark, written and composed by Ola Salo. It was released as the second single of their fourth album, Prayer for the Weekend. On 10 March 2007 the song won Melodifestivalen 2007 and therefore became Sweden's Eurovision Song Contest 2007 entry. The song won both the jury and public vote. 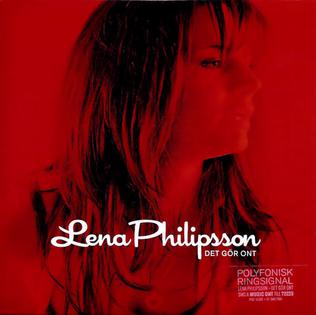 "Det gör ont" is a song recorded by Swedish singer Lena Philipsson. It was written by Thomas "Orup" Eriksson and produced by Anders Hansson for Philipsson's studio album Det gör ont en stund på natten men inget på dan (2004). It is the best known as Sweden's entry at the Eurovision Song Contest 2004, where it was performed in English as "It Hurts" and finished in fifth place with 170 points.

Sweden selected their entry for ESC 1977 in the show "Melodifestivalen 1977". The winner was the song "Beatles" by a group called Forbes. It was a tribute to the rock band The Beatles, who had split up some years earlier, and was written by Sven-Olof Bagge and Claes Bure.

Forbes was a Swedish dansband of the 1970s.

"Swiss Lady" was the Swiss entry in the Eurovision Song Contest 1977, performed in German by Pepe Lienhard Band. It remained the only Swiss entry to have reached no. 1 on the official Swiss Single Chart until their 2019 entry.

"Enséñame a cantar" is a song recorded by Spanish singer Micky, written by Fernando Arbex. It is best known as the Spanish entry at the Eurovision Song Contest 1977, held in London.

"En gång i Stockholm" was the Swedish entry in the Eurovision Song Contest 1963, performed in Swedish by one of Scandinavia's leading jazz singers, Monica Zetterlund.

"Det börjar verka kärlek, banne mig" was the Swedish entry in the Eurovision Song Contest 1968, performed in Swedish by Claes-Göran Hederström, the winner of Melodifestivalen 1968. Composer Peter Himmelstrand, who incidentally also wrote the two songs that finished in shared third place in the 1968 pre-selections, "Gå och göm dig, Åke Tråk" and "Du vet var jag finns", would go on to write fifteen Melodifestivalen entries as well as many other popular Svensktoppen hits all through the 1960s and 1970s. 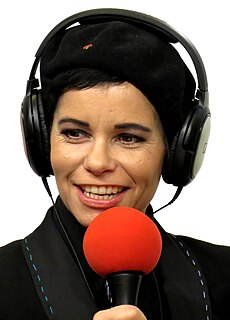 Krång Anna Carolina Norén is a Swedish radio presenter for Sveriges Radio and television presenter. She has been the host of the music chart show Svensktoppen since 2007 and also commentates on Sveriges Radio's broadcasts of Melodifestivalen and the annual Eurovision Song Contest. She took the first steps to a radio career when she participated as an interviewer at the legendary Radio SBC in the Stockholm community radio in 1980-82. She also made some appearances at Stockholm University's student radio station, which eventually led her to being employed by Radio Stockholm through Sveriges Radio between 1989 and 1997.

Melodifestivalen 2017 was the 57th edition of the Swedish music competition Melodifestivalen, which selected Sweden's entry for the Eurovision Song Contest 2017. The competition was organised by Sveriges Television (SVT) and took place over a six-week period between 4 February and 11 March 2017.