"Begoo be baran" (Persian : بگو به باران‎), (lit."Tell it to the Rain") is a single by Iranian singer-songwriter Mohsen Namjoo. The poem is by Iranian famous poet Shafiei Kadkani and the whole song is a dialogue with the rain, and its music video is acted by another Iranian musician named Parham Alizadeh. The song is dedicated to Hossein Alizâdeh and Mohammad-Reza Shafiei Kadkani. [1] 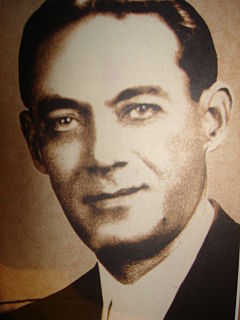 Old Azeri, also referred to as Azeri, Azari or Adhari, is the extinct Iranian language that was once spoken in Azerbaijan before the Turkification of the Azeris. Some linguists believe the southern Tati varieties of Iranian Azerbaijan around Takestan such as the Harzandi and Karingani dialects to be remnants of Azeri. In addition, Old Azeri is known to have strong affinities with Talysh.

Reza Ghoochannejhad Nournia is a professional footballer who plays for Dutch side PEC Zwolle as a forward. He is also known as Gucci in Belgium and Netherlands, having played for Dutch national youth teams and the Iranian national team.

Nasser Pourpirar was a famous Iranian writer and historical revisionism. He was known for his controversial theories questioning the academically recognized historiography of Iran from Achaemenids to the beginning of the Safavid period.

Dizar is a village in Jafarabad Rural District, Jafarabad District, Qom County, Qom Province, Iran. At the 2006 census, its population was 30, in 7 families.

Vahid Amiri is an Iranian football player playing for Persepolis in the Persian Gulf Pro League. Amiri represented the Iran national football team at the 2015 and 2019 AFC Asian Cups and also 2018 FIFA World Cup. He predominantly plays as a left winger but can play as a second striker.

Beyond Any Form is a collaborative studio album by Persian traditional musicians Homayoun Shajarian and Tahmoures Pournazeri, as vocalist and composer respectively.

Fakhreddin Ahmadi-Danesh-Ashtiani is an Iranian politician and scholar and the former Minister of Education.

Mohammad Reza Khalatbari was an Iranian association footballer and coach. 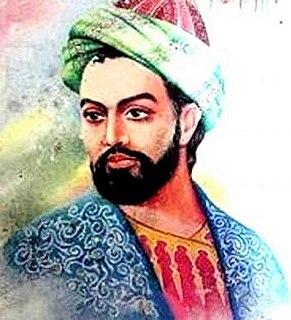 Muhammad Ibn Abdullah Taleb Amoli known as Talib Amuli and Talib Amoli Iranian Tabari poet was of the early 17th century. He was the poet laureate of the Mughal emperor Jahangir from 1629 till his death. His poetry is in the “Indian Style” of Persian language. A poetry collection (divan) and the poem Talib and Zohre are the works that are left of him today. The fact that he read mathematics, geometry and philosophy in his poems reveals that he received a good education. He is also known to be a good calligrapher.

Kimia or Kimiya is a feminine given name in Persian language, in which it means elixir of life, alchemy, or the philosopher’s stone. In ancient Persian poetry, kimia means "rare" or "unique." 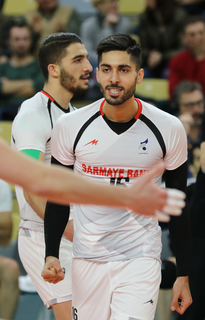 Ali Shafiei is an Iranian volleyball player who plays as a middle blocker for the Iranian national team and Iranian team Shahrdari Urmia.

Mehdi Tikdarinejad (persian:مهدی تیکدری نژاد commonly known as Mehdi Tikdari is an Iranian professional footballer who plays as a Right-Back for Tractor in the Persian Gulf pro league.

Payam Salehi, Persian: پیام صالحی‎, Iranian singer and guitarist and artist, is one of the main members and founders of the band Arian. Encouraged by his parents, he turned to music and learned to play the santorini with Azita Hajian as a child. After Santour, he turned to guitar and piano. Together with Ali Pahlavan, he formed Arian, which was originally a traditional music group.

Hossein Salari Moghaddam, better known as Salar Moghadam, is an Iranian musical artist, singer, composer and music producer. He has collaborated with many Iranian singers and artists. Among the most famous people whose work he has been producing are Andy, Mohammad Reza Golzar, Morteza Pashaei, Farzad Farzin, Sahar, Ahlam, etc.According to the number of works done, Salar Moghadam is one of the most prolific Iranian producers and musicians. 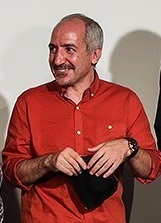 Reza Moatarian is an Iranian photojournalist.