Last updated October 18, 2022
This article is about the city. For the regency, see Bekasi Regency.
City in West Java, Indonesia

Bekasi (Indonesian pronunciation:  [ˈbəkasi] , Sundanese : ᮘᮨᮊᮞᮤ) is a landlocked city in West Java, Indonesia, located on the eastern border of Jakarta. It serves as a commuter city within the Jakarta metropolitan area. According to the 2020 Census by Statistics Indonesia (BPS), Bekasi had 2,543,676 inhabitants. [2] The official estimate for mid 2021 was 2,564,940. [3] It lies within the largest metropolitan area in Indonesia ( Jabodetabek ). The city is bordered by Bekasi Regency to the north and the east, Bogor Regency and Depok to the south, and East Jakarta to the west.

Bekasi is one of the oldest cities in Indonesia, and has a history of being the capital city of the Kingdom of Tarumanagara. At that time, the name of Bekasi was Dayeuh Sundasembawa or Jayagiri. The earliest evidence of its existence dates from the 5th century according to the Tugu inscription, which describes the name of two rivers that run through the city, i.e. Candrabhaga and Gomati and one of those rivers, i.e. Candrabhaga is the origin of the name Bekasi where the name Candrabhaga evolved into Bhagasasi due to the Sanskrit word candra which means moon evolved into Old Javanese word 'sasi' which also means moon and then the name Bhagasasi was misspelled as Bhagasi and then Dutch colonial government also misspelled the name Bhagasi as Bacassie and finally it became Bekasi. [4] During the Dutch East Indies period, Bekasi was a part of Batavia residency. As a dormitory city, many middle class satellite areas have been developed in Bekasi, [5] complete with their own shopping malls, schools, hospitals, club houses, water park, and shuttle bus services to central Jakarta. The large number of multinational companies has apparently attracted many expatriates (mainly Japanese and Korean) to settle in Bekasi. [6]

Bekasi has already grown to become one of the centre of growth in Jabodetabek. The city accounts for 2.11% of total national GDP. [7] Recently, many foreigners (mostly Korean, Japanese, and Chinese) have set up their business to take advantage of its dynamism and boost its economy. Bekasi's economy was mainly based on service and manufacturing.

Bekasi is one of the most promising property markets in Jabodetabek besides South Tangerang, and several high-value developments have transformed its property market. Many of country's big property developers are building apartments, hotels, and shopping malls in the city. In recent years, some residences have developed along the Jatiwarna/Jatibening — East Bekasi toll highway, further to Cibatu in Bekasi Regency. These include Harapan Indah, Summarecon Bekasi, Kemang Pratama and Grand Galaxy City.

The development of large scale residential areas and industrial parks in Bekasi has been induced by infrastructure development, especially roads, highways and railways.

Bekasi is connected by the Trans-Java Toll Road, the main road across Java. There are three expressways connections from the Jabodetabek urban area: the Jakarta–Cikampek Toll Road, which has three exits in Bekasi; the Jakarta Outer Ring Road, which provides access to Tangerang, Jakarta and Bogor; and the new Bekasi-Cawang-Kampung Melayu Toll Road. In 2019, Jakarta-Cikampek elevated toll road will operate to ease traffic on the current toll road between Cikunir and West Karawang with a total length of 36.4 kilometres. [9] Owing to its location as a satellite city of Jakarta, heavy rush hour traffic jams have become common on the roads between East Jakarta and Bekasi.

At present, rapid transit in Bekasi across Greater Jakarta consists of a commuter rail KRL Commuterline and a bus rapid transit TransJakarta.

TransJakarta and the Transjabodetabek premium serves commuters from Harapan Indah, Summarecon Bekasi, Bulak Kapal, and Jatiwarna, as well as the feeder buses from Kemang Pratama and Grand Galaxy City to Jakarta city center. The Trans Patriot operates a route within the city. Damri shuttle bus service is available from the Soekarno–Hatta International Airport to Kayuringin, Harapan Indah and Summarecon Bekasi. Taxis are widely available. The primary means of public transportation is by minibus, called angkot. They serve certain routes throughout the city.

The main bus terminal is Terminal Bekasi, located in East Bekasi. The other terminals are Pondok Gede, Harapan Indah and Kayuringin.

The 2020 Census of Bekasi's population was 2,543,676. Bekasi is inhabited by many different ethnic groups, mostly Sundanese, Betawi and Javanese descent. Sundanese are the largest minority as well as other minorities include Minangkabau, Bataks, and Chinese.

Most citizens in Bekasi adhere to Islam. Other religions include Christianity (Roman Catholicism and Protestantism), Hinduism, Buddhism, and Confucianism.

Bekasi was the home base of the football team PCB Persipasi ., [12] with Patriot Chandrabhaga Stadium as the home stadium of the club. [13]

Bekasi City is divided into twelve districts ('kecamatan'), listed below with their areas and their populations at the 2010 Census [14] and the 2020 Census, [15] together with the official estimates for mid 2021. [16] The table also includes the number of urban villages (kelurahan) within the district, and its postal codes.

Notable people from Bekasi include: 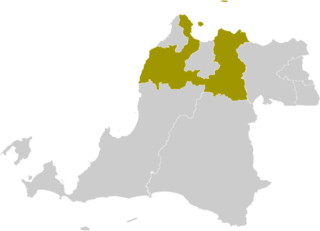 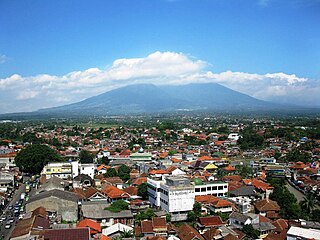 Tangerang is a city in the province of Banten, Indonesia. Located on the western border of Jakarta, it is the third largest urban centre in the Greater Jakarta metropolitan area after Jakarta and Bekasi; the sixth largest city proper in the nation; and the largest city in Banten province. It has an area of 164.55 square kilometres and an official 2010 Census population of 1,798,601, which had risen to 1,895,486 at the 2020 Census. – making it the eighth most populated suburb in the world at the latter date; the official estimate as at mid 2021 was 1,911,914. It has not only functioned as a dormitory city, as there are many industrial areas such as Jatake, and several business districts, including CBD Alam Sutera in the area. Located just next to Jakarta on the west with many road access and improved infrastructure, such as new toll road, it is one of the favorite location for property seekers and investors in the Bodetabek area. 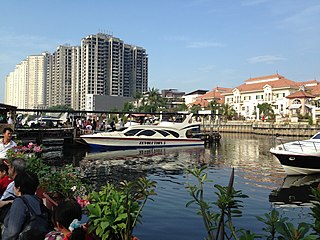 North Jakarta is one of the five administrative cities which form Special Capital Region of Jakarta, Indonesia. North Jakarta is not self-governed and does not have a city council, hence it is not classified as a proper municipality. It contains the entire coastal area within the Jakarta Special District. In North Jakarta, an area at the estuary of Ciliwung river was the main port for the kingdom of Tarumanegara, which later grew to become Jakarta. Many historic sites and artefacts of Jakarta can be found in North Jakarta. Both ports of Tanjung Priok and historic Sunda Kelapa are located in the city. The city, which covers an area of 139.99 km2, had 1,645,659 inhabitants at the 2010 census and 1,778,981 at the 2020 census. It has its administrative centre in Tanjung Priok.

Tangerang Regency is a regency of Banten province, Indonesia. It is located on the island of Java. The current regent is Ahmed Zaki Iskandar. Though commonly misunderstood as being a part of Jakarta, Tangerang is actually outside Jakarta City but is part of Greater Jakarta. Since 1993, the regency has lost territory as first Tangerang city was split off on 27 February 1993 and subsequently South Tangerang city was split off on 29 October 2008. The residual Regency now has an area of 959.61 km2 and a population of 2,834,376 at the 2010 census, growing to 3,245,619 at the 2020 census; the latest official estimate is 3,293,533 Tigaraksa is the regency seat.

Karawang Regency is a regency (kabupaten) of West Java, Indonesia. The town of Karawang is its administrative centre. The regency covers an area of 1,753.27 km2 and had a population of 2,127,791 people at the 2010 Census, which grew to 2,361,019 at the 2020 Census. The official estimate for mid 2021 was 2,406,900 for a density of 1,372.8 people per km2. The regency borders Bekasi and Bogor regencies in the west, the Java Sea in the north, Subang Regency in the east, Purwakarta Regency in the southeast, and Cianjur Regency in the south. The regency lies on the eastern outskirts of Metropolitan Jakarta, just outside the Jabodetabek region, and is the site of industrial activity. 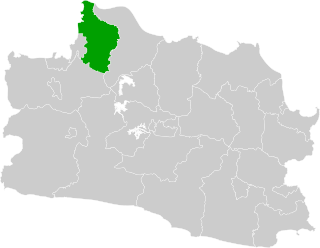 Bekasi Regency is a regency (kabupaten) of West Java Province, Indonesia. Its regency seat is in the district of Central Cikarang. It is bordered by Jakarta and by Bekasi City to the west, by Bogor Regency to the south, and by Karawang Regency to the east.

Pandeglang Regency is a regency of Banten province, Indonesia. It is mainly located on the west and south coasts of the island of Java, and is the most westerly regency on Java Island, but it also includes a number of offshore islands such as Panaitan, Deli and Tinjil. The regency has an area of 2,746.81 km2, and an population at the 2010 Census of 1,149,610, rising to 1,272,687 at the 2020 Census; the official estimate as at mid 2021 was 1,288,314. The regency seat is the town of Pandeglang.

Cikampek is a subdistrict of Karawang Regency, West Java, Indonesia and is divided into 10 administrative villages (kelurahan). The distance from Cikampek to Karawang city is 21 miles. 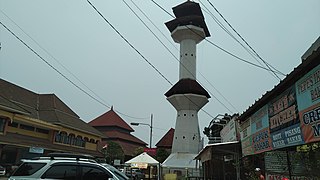 South Tangerang is a city in the province of Banten, Indonesia. Located 30 km (19 mi) on the southwestern border of Jakarta, the city forms part of the Greater Jakarta metropolitan area. It was administratively separated from Tangerang Regency on November 26, 2008. According to the 2020 Census, the city population was 1,354,350 inhabitants, while the official estimarte as at mid 2021 was 1,365,688. The total area is 147.19 km2 (56.83 sq mi). It's the second-largest city in Banten in terms of population, and has grown rapidly, not only as Jakarta's satellite city, but also the development of business districts and commerce due to presence of large-scale planned town by private developers.

The North Coast Road is a road 1,430 km in length, that connects Merak and Banyuwangi along the northern coast of Java, particularly between Jakarta and Surabaya.

Summarecon Bekasi is a township at Bekasi, Indonesia. The area is located within Greater Jakarta metropolitan area. The development has a land area of about 240 hectares. The township is divided into commercial and a residential zone.

Wikimedia Commons has media related to Bekasi (city) .
This page is based on this Wikipedia article
Text is available under the CC BY-SA 4.0 license; additional terms may apply.
Images, videos and audio are available under their respective licenses.