Beklemishevskaya Tower (Russian : Беклемишевская) is a tower at the Eastern edge of Moscow Kremlin Wall. It was named after a boyar Ivan Bersen-Beklemishev, whose house had been adjacent to the tower from the Kremlin side. It was earlier known as Russian : Москворецкая tower based its position on the near Moskva River. It is similar to the other two towers standing at the other corners of the Kremlin triangle, Vodovzvodnaya and Uglovaya Arsenalnaya rowers. While these towers are cylindrical, all other towers of the Kremlin’s Wall have been built on a square plan base.

This is a 46.2 meter high cylindrical tower with four floors and widely spaced narrow windows. The upper floor is a defensive position with openings at the planking of the mâchicoulis for firing downwards. The tower is topped with an octagonal upper building with louvers and a weather vane.

It was erected in 1487-88 as part of the reinforcement of the Kremlin’s reserve lines. It was built in place of an earlier fortification following the plans of the Italian architect Marco Ruffo. While it is sometimes considered the only tower on the wall of the Kremlin that has not changed substantially over the preceding centuries, it has also been suggested that it was destroyed by the forces of Napoleon and rebuilt subsequently. Only minor repairs were carried out during the 20th century. The roof was replaced with copperplates in 1973.

A kremlin is a major fortified central complex found in historic Russian cities. This word is often used to refer to the most famous one, the Moscow Kremlin, or metonymically to the government that is based there. Other such fortresses are called detinets, such as the Novgorod Detinets.

Julian Alexandrovich Scriabin was a Swiss-born Russian composer and pianist who was the youngest son of Alexander Scriabin and Tatiana de Schloezer.

Khovrino is a station on the Zamoskvoretskaya line of the Moscow Metro. The station opened on 31 December 2017. It is the northern terminus of the line, and the closest subway station to the Sheremetyevo International Airport.

The Lopukhin family was a noble family of the Russian Empire, forming one of the branches of the Sorokoumova-Glebov family. Eudoxia Lopukhina married Peter the Great. When Pyotr Lopukhin's son died childless, the family's princely title passed to Nikolai Petrovich Demidov-Lopukhin. The present Prince Lopukhin-Demidov is Nikolai Alexander Paul Demidoff born in 1976.

Monument to Lenin on Tverskaya Square is a sculpture of Vladimir Lenin located in front of the Russian State Archive of Socio-Political History building in Moscow. Established in 1940. The authors of the monument are sculptor S. D. Merkurov and architect I. A. Frantsuz. The monument has the status of an object of cultural heritage of federal significance.

Monuments to Herzen and Ogaryov on Mokhovaya Street were installed in Moscow on Mokhovaya Street in front of the old building of Moscow State University and form a single ensemble. They were opened in 1922. The authors of the monuments are the sculptor N. A. Andreev and the architect V. D. Kokorin.

The Monument to Leo Tolstoy on Prechistenka was installed in Moscow in the courtyard of the State Museum of Leo Tolstoy. Granite sculpture was made in 1913 by sculptor S. D. Merkurov. At the present place has been since 1972.

The House of AI Lobkova is located in the center of Moscow. It was built in the late 18th century. It has the status of an object of cultural heritage of federal significance. At present the house is occupied by the State Institute of Art Studies. 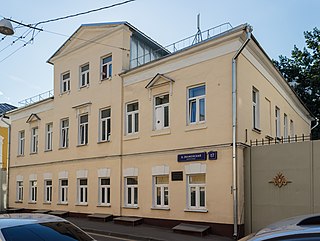 Fedor Maksimovich Putintsev was a Soviet propagandist of atheism and a scientific worker in the study of problems of religion and atheism. He was also a journalist and writer.

Klara Naumovna Berkova, was a Russian writer, doctor of medicine, popularizer of scientific and anti-religious knowledge.

Grigory Dementevich Kostomarov, was a Russian writer, participant of the Great October Socialist Revolution, Doktor Nauk in Historical Sciences, professor, head of the Department of CPSU History at the Academy of Social Sciences at the Central Committee of the CPSU, director of the Institute of CPSU History at the Moscow City Committee of the CPSU. He died in Moscow, was buried at the Novodevichy Cemetery. His wife is Zolotova-Kostomarova Maria Iosifovna, doctor, Doktor Nauk in Medical Sciences, professor. His son is Vitaly Grigorievich Kostomarov. 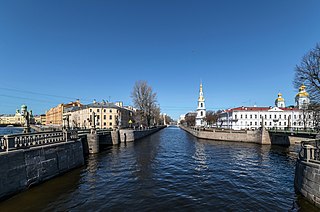 Kryukov Canal is one of the Canals in central Saint Petersburg, Russia. 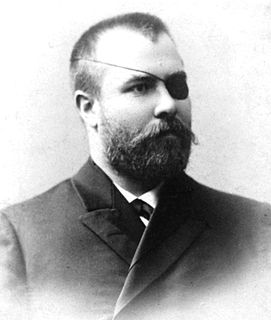 Matvey Kuzmich Lyubavsky was a Russian and Soviet historian, professor, academic and rector of the Moscow University from 1911 to 1917.