The Belarusian First League is the second division of professional football in Belarus. It was created in 1992, following the Belarusian independence.

The typical format of the league involves 16 clubs playing a double round-robin tournament over 30 matchdays (with the exception of shortened 1992 and 1995 seasons, which were a single round-robin tournaments). On several occasions the number of participating teams was smaller (15 or 14), due to last minute withdrawals and no teams available for replacement.

In most of the seasons, two best teams are getting promoted to Belarusian Premier League, while two worst teams are relegated Belarusian Second League. There were, however, some deviations from this formula, particularly when the Premier League was expanding or shortening.

In 2019, the Belarusian First League will consist of the following 15 teams:

Teams in bold were promoted to Premier League at the end of the season.

The Belarusian Premier League or the Vyšejšaja Liha or the Vysheyshaya Liga is the top division of professional football in Belarus, and is organized by the Belarusian Football Federation. The number of teams in the competition has varied over the years from as high as 17 to as low as 11 (2012). As of 2016, the league includes 16 teams. Each team plays every other team twice during the course of the season. At the end of the season, the two teams with the fewest points are automatically relegated to the Belarusian First League, while the third worst team plays a promotion-relegation playoff against the third best team from the second tier. The top two teams from the Belarusian First League automatically win promotion to the Premier League. Dinamo Brest are the current champions, after winning their first championship title in 2019.

The Persha Liha or Ukrainian First League is a professional football league in Ukraine and the second tier of national football competitions. Members of the league also participate in the Ukrainian Cup. It is the highest division of Professional Football League pyramid.

FC Kuban was a Russian football club based in Krasnodar. The team began playing in the Russian Premier League in 2011, after it was promoted for winning the Russian First Division. FC Kuban was one of the oldest football clubs in Russia. Founded as Dynamo of the Krasnodar NKVD, FC Kuban changed its affiliations because of changing politics in the USSR.

Liga Leumit is the second division of the Israeli Football League, and below its Premier League. 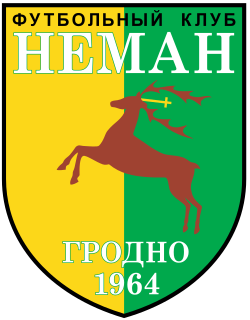 FC Neman Grodno is a Belarusian football club from the city of Grodno, named after the Neman River and was founded in 1964. Since 1992, the team has participated in the top league of Belarus.

FC Dnepr Mogilev is a Belarusian football team, playing in the city of Mogilev. Their home stadium is Spartak Stadium.

FC Torpedo Minsk is a Belarusian football club, playing in Minsk. The team plays their home games at the Torpedo Stadium in Minsk, which holds 4,800 people. Since 2019 they compete only with youth selections.

1995 Belarusian First League was the fifth season of 2nd level football championship in Belarus. It started in July and ended in November 1995.

The 2013 Belarusian Premier League was the 23rd season of top-tier football in Belarus. It began in April 2013 and ended in November 2013. BATE Borisov are the defending champions, having won their 9th league title the previous year. 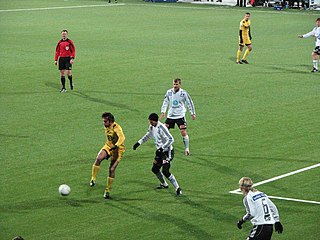 The Eliteserien, until 1991 known as the 1. divisjon and between 1991 and 2016 known as Tippeligaen, has employed a system of play-off qualification to determine promotion and relegation with the 1. divisjon. Various varieties have been in place since the system was introduced at the end of the 1972 season, but only one team has been promoted per year. The play-offs have always supplemented a system of direct promotion and relegation of two teams. The play-offs have been wavered twice, in the 1994 and 2011 seasons, when the top league was expanded to fourteen and sixteen teams, respectively.

The 2014 Belarusian Premier League was the 24th season of top-tier football in Belarus. It began in March 2014 and ended in November 2014. BATE Borisov are the defending champions, having won their 10th league title last year.

The 2015 Belarusian Premier League was the 25th season of top-tier football in Belarus. It began on 10 April 2015 and ended on 8 November 2015. BATE Borisov were the defending champions, having won their 11th league title last year, and secured a 12th.