The Belarusian Telegraph Agency or BelTA (Belarusian : Беларускае Тэлеграфнае Агенцтва, Russian: Белорусское Телеграфное Агентство, БелТА) is the state-owned national news agency of the Republic of Belarus. It operates in Russian, Belarusian, English, German, Spanish and Chinese languages. [1] Since 2018, the director of BELTA is Irina Akulovich [2]

The agency was founded on December 23, 1918. During the Soviet times BelTA cooperated with the Telegraph Agency of the Soviet Union (TASS), although it was legally independent of it.[ citation needed ]

After the USSR ceased to exist in 1991, BelTA has been the national news agency of Belarus. It transmits over a hundred daily reports, and provides information to other news agencies of Commonwealth of Independent States members about the activities of Belarusian officials and organizations in and out of the country.[ citation needed ]

BelTA has offices in all regions of Belarus, as well as abroad. The main office is in Minsk.[ citation needed ]

The BelTA Director-General Dzmitry Zhuk has been banned from Entering the European Union between 2011 and 2016 as part of the EU's sanctions against Belarus following what the EU describes as a crackdown of opposition protests after the 2010 presidential election. [3] According to the EU Council's decision concerning restrictive measures against Belarus following the 2010 election, Dzmitry Zhuk is responsible for "relaying state propaganda in the media, which has supported and justified the repression of the democratic opposition and of civil society on December 19, 2010 using falsified information." [4] 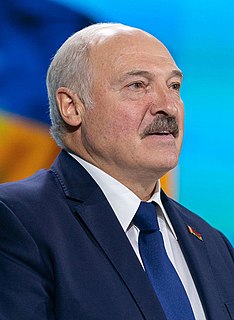 Alexander Grigoryevich Lukashenko or Alyaksandr Ryhoravich Lukashenka is a Belarusian politician, army officer and military personnel who has served as the first and only president of Belarus since the establishment of the office 26 years ago, on 20 July 1994. Before launching his political career, Lukashenko worked as director of a state farm (sovkhoz), and served in the Soviet Border Troops and in the Soviet Army.

The Belarusian Private News Agency or shortly BelaPAN is a non-governmental independent Belarusian news agency, one of the main in the country. BelaPAN provides news on politics, economy, and sports from Belarus in Russian, Belarusian and English. The staff includes a wide net of reporters and correspondents.

Mikhail Batura is a Belarusian scientist and university rector accused of political repressions.

Oleg Vitoldovich Proleskovsky is a Belarusian politician, and the Minister of Information of Belarus.

Vladimir Pavlovich Peftiev is a Belarusian businessman, investor and philanthropist.

Lieutenant-General Yuri Viktorovich Zhadobin was the Chairman of the KGB of the Republic of Belarus from 2007 to 2008 and the Minister of Defence of Belarus from 4 December 2009 to 27 November 2014. He replaced Leonid Maltsev and was succeeded by Andrei Ravkov. Zhadobin was subject to international sanctions as a person responsible for political repressions and human rights violations in Belarus.

Dzmitry Zhuk is a Belarusian journalist and media manager. He is the former head of the press service of president Alexander Lukashenko. Since February 2018 Main Editor of the state-owned newspaper holding Sovetskaya Belorussiya. He was accused of organizing propagandist support to political repressions and placed on the EU sanctions list between 2012 and 2016 when he was Director General of the state-owned news agency BelTA. Son of the Belarusian writer Ales Zhuk.

Aliaksei Mikhalchanka is a Belarusian journalist, propagandist and TV presenter.

Gennady Davydko is a Belarusian politician and TV propagandist, included in the sanctions list of the European Union in 2011 - 2016.

Yury Koziyatko is a Belarusian politician, TV presenter and propagandist. He has been accused of propaganda supporting and justifying human rights violations in Belarus and included in a sanctions list of the European Union in 2011-2016.

Alexander Zimovsky is a Belarusian politician and former media executive and TV host, accused of being one of the key propagandists of the authoritarian regime of Alexander Lukashenko.

Viktor Aleksandrovich Lukashenko is a Belarusian politician and the eldest son of the Belarusian president Alexander Lukashenko. He has been accused of human rights violations and placed on the sanctions lists of the United States and the European Union.

Dmitry Aleksandrovich Lukashenko is a Belarusian businessman and son of Alexander Lukashenko, the President of Belarus.

Vadim Gigin is a Belarusian propagandist, TV host, historian and politician. He was included into a sanctions list of the European Union in 2011 – 2016.

Pavel Yakubovich is a Belarusian journalist and politician. As the chief editor of Sovetskaya Belorussiya – Belarus' Segodnya, the main official newspaper of Belarus, he has been accused of propaganda in favour of the authoritarian regime of president Alexander Lukashenko.