The Belgian Basketball Cup (Dutch: Beker van België), for sponsorship reasons the EuroMillions Cup, [1] is the top tier national basketball cup competition in Belgium. The tournament is played in a knock-out format, in which teams are drawn against each other. Oostende is the most successful club in the competition's history, as it won 19 titles.

In 2013, the cup got a new name in The Base Cup, referring to the new main sponsor Base. The mobile telephony provider signed a sponsorship contract for 3 years. This led to, in the 2013–14 season, the first time a Final Four was held instead of semi-finals with two legs since 2003. [2]

Due to sponsorship reasons, the cup competition has known several names: 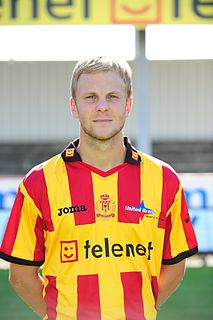 Julien Gorius is a former French professional footballer who is currently a sporting director for RWDM47 in the Belgian First Division B.

Onur Kaya is a Belgian professional footballer of Turkish descent who plays as an attacking midfielder for Mechelen. 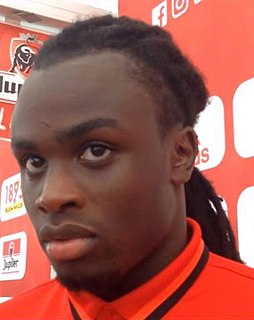 Jordan Zacharie Lukaku Menama Mokelenge is a Belgian professional footballer who plays as a left back for Belgian club Antwerp, on loan from Italian club Lazio, and the Belgium national team. His older brother, Romelu, is also a footballer and a Belgian international.

Okapi Aalst is a Belgian professional basketball club from Aalst, Belgium. The club competes in the top tier Pro Basketball League (PBL) and plays its home games in the Okapi Forum, which has a seating capacity of 2,800 people. 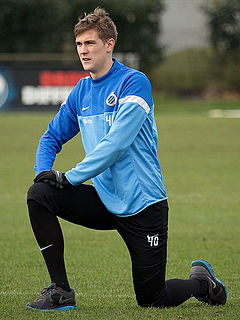 Björn Lionel G. Engels is a Belgian professional footballer who plays as a centre back for Premier League club Aston Villa.

The 2013–14 Belgian Basketball Cup or The Base Cup for sponsorship reasons, was the 60th season of the annual cup tournament in Belgium. Telenet BC Oostende was the defending champion.

The Belgian Prayer of the Year is an annual Basketball League Belgium Division I award given to the best player with a Belgian nationality. The award is organised by the Belgian newspaper Het Nieuwsblad.

Jonathan Benteke Lifeka is a Belgian footballer who plays as a forward for Belgian club URSL Visé.

The 2017–18 Belgian Cup was the 63rd season of Belgium's annual football cup competition. The competition began on 28 July 2017 and ended with the final on 17 March 2018. Zulte Waregem were the defending champions, but they were eliminated by Club Brugge in the Seventh Round. Standard Liège won the cup, beating Genk after extra time in the final. As the winner, Standard Liège was normally qualified for the 2018–19 UEFA Europa League Group Stage. As they ended 2nd in the Belgian Competition, they will participate in the 3rd qualification round of the Champions League.