Belgorod Kievsky (Ukrainian : Білгород-Київський; Russian : Белгород Киевский, Belgorod Kievsky) was a legendary city-castle of Kievan Rus' that was located on the right bank of Irpin River (now located in Ukraine) and was mentioned in chronicles [1] [2] .

The city was quite prominent in the 10th-12th centuries but ceased to exist after 1240 destruction of Kiev by the Mongols. Currently there is a small village of Bilohorodka , Kiev Oblast near the location of the defunct city. [3] [4] [5]

The city is first mentioned in chronicles in 980. [3] [5] In 991 Vladimir I of Kiev built his castle there. [5] According to the chronicle Bilhorod was the favourite residence of Vladimir I who moved a lot of his people there including his three hundred concubines. [5] The right bank of the Irpin River was the land of Drevlyans who resisted Kievan Princes, thus, establishment of the castle might be intended to consolidate the power of Kiev over the drevlians. The castle also protected Kiev from the nomads of the Great Steppe. [3]

In 997 the new castle survived the long siege by the Pechenegs and protected Kiev from Pecheneg conquest. [6] [3] [5] According to the Primary Chronicle there was a famine in the city during the siege and the residents assembled a veche or assembly to decide whether they should surrender to pechenegs. Veche decided to continue the defence of the city that eventually led to the victory. [7] It was the first mention of veche in Russian chronicles. Later veche became the main form of government in Novgorod Republic and other states in the Northern Rus.

The most prosperity the city achieved was under Rurik Rostislavich, the ruler of Kievan Rus, who made the city his capital. [3] In the 13th century after the Mongol invasion of Rus' Bilhorod degraded and after destruction of Kiev in 1240 Bilhorod ceased to exist. There is still the small village Bilohorodka near the ruins of the city that keeps its name. [3]

The ruins of the city (the Horodyshche) is a place of important archaeological excavation. Most of it is not excavated yet [8] . The area of Horodyshche is 110 hectares. According to historian A. Chlenov the place is particularly important as it is: 1) The only drevlian fortress surviving almost intact (with its walls, etc.); 2) The only fortress of 10th century Rus of such preservation; 3) The biggest survived fortress of that epoch. [3] 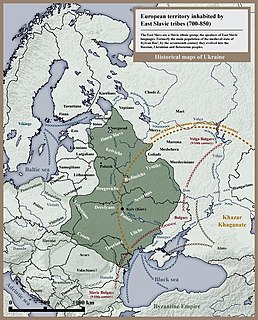 The Polans, also Polianians, were an East Slavic tribe between the 6th and the 9th century, which inhabited both sides of the Dnieper river from Liubech to Rodnia and also down the lower streams of the rivers Ros', Sula, Stuhna, Teteriv, Irpin', Desna and Pripyat. In the Early Middle Ages there were two separate Slavic tribes bearing the name of Polans, the other being the western Polans, a West Slavic tribe. 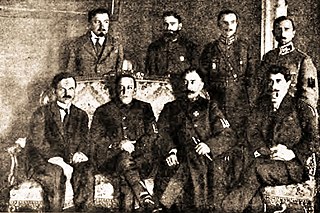 The Directorate, or Directory was a provisional collegiate revolutionary state committee of the Ukrainian People's Republic, initially formed on November 13–14, 1918 during a session of the Ukrainian National Union in rebellion against Skoropadsky's regime. During the overthrow of Pavlo Skoropadsky it was named as the Executive Council of the State Affairs. Its authority was extended by the Labor Congress of Ukraine on January 23–28, 1919.

Yaroslav Stetsko was the leader of Stepan Bandera's Organization of Ukrainian Nationalists (OUN), from 1968 until his death. In 1941, during the Nazi German invasion of the Soviet Union, he was self-proclaimed temporary head of an independent Ukrainian government declared by Stepan Bandera. Stetsko was the head of the Anti-Bolshevik Bloc of Nations from the time of its foundation until 1986, the year of his death.

Pavlo Hai-Nyzhnyk was born on May 28, 1971 in Dunaivtsi of Western Podillya, Soviet Union and is a Ukrainian historian, Doctor of Historical Sciences, Senior Research Scientist at I.F.Kuras Institute of Political and Ethnic Studies of National Academy of Sciences of Ukraine, Academician of the Ukrainian Academy of Sciences (Kyiv), Head of Department of Historical Studies at the Scientific Research Institute of Ukrainian Studies (Kyiv), and Ukrainian poet.

Vladimir Ippolitovich Lipsky or Volodymyr Ipolytovych Lypsky was a Ukrainian scientist, botanist; a member of National Academy of Sciences of Ukraine and corresponding member of the USSR Academy of Sciences, and the Director of the Botanical Gardens of the Odessa University.

Vadym A. Rubel is a Ukrainian historian of the history of Japan, the civilizations of the Classic East and pre-Columbian America and the political history of the Far East. Doctor of science (History) (1999), professor (2002). Graduated from faculty of history of Taras Shevchenko University of Kiev.

Nikolai Bartossik is a Ukrainian-American contemporary painter and monumental artist.

Radomysl paper mill is a paper producing factory in the town of Radomyshl. It has been in operation since the first half of the 17th century, first as a paper mill, then as a flour mill. It is now part of Historical and cultural complex Radomysl Castle.

The chronology of Ukrainian language suppression.

Terny is a village in Ukraine in the Lubny Raion (district) of Poltava Oblast. In 2001, there were 471 inhabitants. It is situated on the right bank of the river Sula.

Ahatanhel Yukhymovych Krymsky was a Ukrainian Orientalist, linguist and polyglot, literary scholar, folklorist, writer, and translator. He was one of the founders of the All-Ukrainian Academy of Sciences (VUAN) in 1918 and a full member of it and of the Shevchenko Scientific Society from 1903.

Obolon is a historical locality which includes a residential area (masyv), along with an industrial park within the Ukraine's capital Kiev that is located on its northern side, in an eponymous city district - the Obolonskyi District. 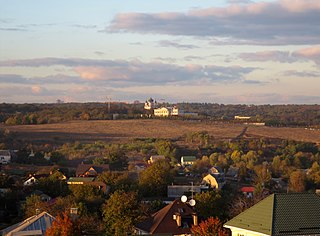 Khotiv hillfort is a hillfort of early Iron Age in the village of Khotiv, Ukraine.

Watching the sky and thinking a thought is a song with lyrics written by Ukrainian romantic poet Mykhailo Petrenko in 1841. It was set to music by Lyudmila Alexandrova. Vladislav Zaremba arranged this song for voice and piano. 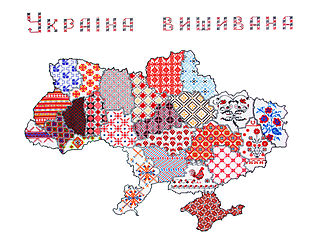 National symbols are the sacred attributes for Ukrainian people. In Ukrainian graphics there exist a number of symbols and images from national songs, legends. Such symbols and imagery are used in national customs and rituals. They are reproduced in embroidery on national costumes, ritual cloth—rushnyks, painted on crockery, in forged products, in carving, in bas-relief house decoration, in hearth painting, pottery, engraving and also in Ukrainian traditional Easter eggs—pysankas.