In Greek mythology, Belus (Ancient Greek: Βῆλος Bē̂los) was a king of Egypt and father of Aegyptus and Danaus and (usually) brother to Agenor. [1] The wife of Belus has been named as Achiroe, or Side (eponym of the Phoenician city of Sidon).[ citation needed ]

Diodorus Siculus [2] claims that Belus founded a colony on the river Euphrates, and appointed the priests-astrologers whom the Babylonians call Chaldeans who like the priests of Egypt are exempt from taxation and other service to the state.

Belus was the son of Poseidon and Libya. He may also be Busiris, son of Libya, ruler of Egypt, killed by Heracles,[ citation needed ] although Heracles was born many generations after Belus since he was a grandchild of Perseus; see Argive genealogy below. According to Pausanias, Belus founded a temple of Heracles in Babylon. [3]

The Bibliotheca also claims that Agenor was Belus' twin brother. [4] Belus ruled in Egypt, and Agenor ruled over Sidon and Tyre in Phoenicia. The wife of Belus has been named as Achiroe, allegedly daughter of the river-god Nilus. [5] Her sons Aegyptus and Danaus were twins. Later Aegyptus ruled over Egypt and Arabia, and Danaus ruled over Libya. Pseudo-Apollodorus says that it was Euripides who added Cepheus and Phineus as additional sons of Belus.

In the Hesiodic Catalogue of Women , Belus was also the father of a daughter named Thronia on whom Hermaon, that is Hermes, fathered Arabus, presumably the eponym of Arabia. [6]

According to Pherecydes of Athens, Belus also had a daughter named Damno who married Agenor (Belus' brother, her uncle) and bore to him Phoenix and two daughters named Isaie, and Melia, these becoming wives respectively to sons of Belus (their cousins) Aegyptus and Danaus. [7] Yet another source says that the daughter of Belus who married Agenor was named Antiope. [8] [9]

Nonnus [12] makes Belus the father of five sons, namely Phineus, Phoenix, Agenor (identified as the father of Cadmus), Aegyptus, and Danaus, though Nonnus elsewhere [13] makes Phineus to be Cadmus' brother. Nonnus has Cadmus identify Belus as "the Libyan Zeus" and refer to the "new voice of Zeus Asbystes", meaning the oracle of Zeus Ammon at Asbystes.

"<Ruler> Manticlus founded the temple of Heracles for the Messenians; the temple of the god is outside the walls and he is called Heracles Manticlus, just as Ammon in Libya and Belus in Babylon are named, the latter from an Egyptian, Belus the son of Libya, Ammon from the shepherd-founder. Thus the exiled Messenians reached the end of their wanderings." [3]

Modern writers suppose a possible connection between Belus and one or another god who bore the common northwest Semitic title Ba‘al.[ citation needed ] According to some sources Belus was the son of Poseidon by Libya, he is associated with Babylon and Assyria, and his name is an echo of the Canaanite god Baal (Redfield, 1989, pp. 28 & 30-31), which are linguistically synonymous with Enlil and Marduk , and also in ancient Levantine/Canaanite mythology, a fertility god, whose attributes are lightning, rainstorms and the forces of nature.

In Greek mythology, Aegyptus or Ægyptus was a legendary king of ancient Egypt. He was a descendant of the princess Io through his father Belus, and of the river-god Nilus through Achiroe, his mother.

In Greek mythology, Danaus was the king of Libya. His myth is a foundation legend of Argos, one of the foremost Mycenaean cities of the Peloponnesus. In Homer's Iliad, "Danaans" and "Argives" commonly designate the Greek forces opposed to the Trojans.

Agenor was in Greek mythology and history a Phoenician king of Tyre. Herodotus estimates that Agenor lived sometime before the year 2000 BC.

In Greek mythology, Epaphus, also called Apis or Munantius, was a king of Egypt.

In Greek mythology, Autonoë of Thebes was an eldest daughter of Cadmus, founder of Thebes, Greece, and the goddess Harmonia. She was the wife of Aristaeus and mother of Actaeon and possibly Macris.

In Greek mythology, Busiris was the name shared by two figures:

Periphas in Greek mythology may refer to:

Dia, in ancient Greek religion and folklore, may refer to:

In Greek mythology, Cepheus is the name of two rulers of Aethiopia, grandfather and grandson. 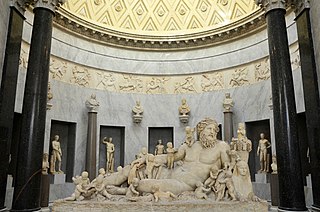 Nilus or Neilos, in Greek mythology, was one of the Potamoi who represent the god of the Nile river itself.

In Greek mythology, Polydorus or Polydoros was a king of Thebes.

Lycus is the name of multiple people in Greek mythology:

Achiroë or Anchirrhoë, or according to the Bibliotheca Anchinoë (Ἀγχινόη), which is perhaps a mistake for Anchiroë, was in Greek mythology a naiad, a daughter of the river-god Nilus. She was also the wife of Belus, by whom she became the mother of Aegyptus and Danaus, and, according to some accounts, Cepheus, and Phineus. Otherwise, the possible mother of this children and spouse of Belus was called Side, eponym of Sidon in Phoenicia.

Thebe is a feminine name mentioned several times in Greek mythology, in accounts that imply multiple female characters, four of whom are said to have had three cities named Thebes after them:

In Greek mythology, Argiope may refer to:

In Greek mythology, Anchiroe may refer to the following figures:

In Greek mythology, Hippodamia,Hippodamea or Hippodameia may refer to these female characters:

In Greek mythology, Pandion may refer to the following characters: