Beni Amrane is a town and commune in Boumerdès Province, Algeria. According to the 1998 census it has a population of 21,452. [1]

Athiémè is a town and arrondissement located in the Mono Department of Benin. The commune covers an area of 220 square kilometres and as of 2013 had a population of 56,483 people.

Xín Mần is a rural district of Hà Giang Province in the Northeast region of Vietnam. As of 2003 the district had a population of 50,307. The district covers an area of 582 km². Its capital lies at Cốc Pài.

Long Mỹ is a rural district of Hậu Giang Province in the Mekong Delta region of Vietnam. As of 2019 the district had a population of 84,089. The district covers an area of 259.92 km². The district capital lies at Vĩnh Viễn town.

Kim Bôi is a rural district of Hòa Bình Province in the Northwest region of Vietnam. As of 2003, the district had a population of 140,031. The district covers an area of 682 km². The district capital lies at Bo.

Cần Giuộc is a rural district of Long An Province in the Mekong Delta region of Vietnam. As of 2003 the district had a population of 161,399. The district covers an area of 211 km². The district capital lies at Cần Giuộc.

Vereshchagino is the name of several inhabited localities in Russia.

Balia, Bangladesh may refer to the following locations in Bangladesh:

Onverst is a village in the Shusha Rayon of Azerbaijan.

Papaqçılar is a village and municipality in the Tovuz Rayon of Azerbaijan. It has a population of 1,387. The municipality consists of the villages of Papaqçılar and Güvəndik.

Kalâat Khasba is a town and commune in the Kef Governorate, Tunisia. As of 2004 it had a population of 2,871.and is the chief town of a delegation of 7,353 people. 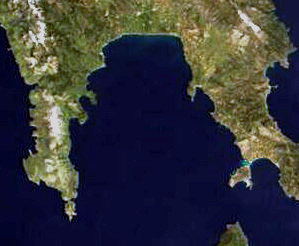 The Laconian Gulf, is a gulf in the south-eastern Peloponnese, in Greece. It is the southernmost gulf in Greece and the largest in the Peloponnese.

Almeria Lykes was a 7,773 GRT Type C3 cargo ship that was built in 1940 by Federal Shipbuilding and Drydock Company, Kearny, New Jersey for the Lykes Brother Steamship Co. She was transferred to the Ministry of War Transport (MoWT) and renamed Empire Condor. In 1942, she was transferred to the United States Maritime Commission (USMC) and renamed Almeria Lykes. She was torpedoed and sunk by Axis motor torpedo boats on 13 August 1942.

Cumbers Reef is a group of rocks aligned in an arc forming the north and west parts of the Amiot Islands, off the southwest part of Adelaide Island. It was named by the UK Antarctic Place-Names Committee for Roger N. Cumbers, 3rd officer of RRS John Biscoe, 1961–62, the ship which assisted the Royal Navy Hydrographic Survey Unit in the charting of this area in 1963.

Mataruge is a village situated in Kraljevo municipality in Serbia.

Hacıahmetli is a village in Mut district of Mersin Province, Turkey. At 36°40′N33°35′E it is about 25 kilometres (16 mi) to Mut. The village is situated in Toros Mountains. The population of the village was 460 as of 2012. The foundation date of the village is not known. According to the Ottoman records of 1536, there was a nomadic Turkmen tribe around Hacıahmetli. But according to grave stones, the first settlement was around the early 1700s.

Tuzluçal is a village in the District of Amasya, Amasya Province, Turkey.

Kələman is a village in the Gadabay Rayon of Azerbaijan. The village forms part of the municipality of Poladlı.