Benito Carbajales Pérez (born in Orense, Spain, 25 July 1913, date of death unknown) was a Cuban footballer, who played as a goalkeeper.

He represented Cuba at the 1938 FIFA World Cup in France. Carbajales appeared in two matches. [1]

The 1938 FIFA World Cup was the third edition of the World Cup, the quadrennial international football championship for senior men's national teams and was held in France from 4-19 June 1938. Italy defended its title in the final, beating Hungary 4–2. Italy's 1934 and 1938 teams hold the distinction of the sole World Cup champions under the same coach, Vittorio Pozzo.

The 2001 FIFA Confederations Cup was the fifth FIFA Confederations Cup and the third to be organised by FIFA. It was also the first in which the original hosts, Saudi Arabia, did not participate. The tournament was played from 30 May to 10 June 2001, and co-hosted by South Korea and Japan, who were also hosts for the 2002 FIFA World Cup finals. It was won by France, beating hosts Japan 1–0, with a goal from Patrick Vieira.

The Asociación de Fútbol de Cuba is the official governing body of the sport of football in Cuba including the National Team. The league is composed of one amateur division with total of 8 teams.

The Jamaica Football Federation (JFF) is the governing body of football in Jamaica and is in charge of the Jamaica national football team and the Jamaica National Premier League.

Carbajales de Alba is a village and municipality located in the northwest of the province Zamora in the autonomous community Castile-Leon of Spain. Carbajales' population reach about seven hundred.

Benito Armando Archundia Téllez is a retired Mexican football referee. He is known in Mexico as Armando Archundia, but appears as Benito Archundia in FIFA records. He has been a professional referee since 1985 and has had his FIFA referee permission since 1993. His first fixture as an international referee was the 1994 match between USA and Greece.

Eraldo Monzeglio was an Italian association football coach and player, who played as a defender, in the position of full-back. Monzeglio had a highly successful career as a footballer, although he also later attracted controversy due to his close relationship with the Italian fascist dictator Benito Mussolini. At club level, he played for Casale, Bologna, and Roma, winning the Serie A title and two editions of the Mitropa Cup with Bologna. At international level, he also had success representing the Italy national football team, and was a member of the Italian teams that won consecutive FIFA World Cup titles in 1934 and 1938, being named to the tournament's All-star Team in 1934; he also won two editions of the Central European International Cup with Italy. Along with Giuseppe Meazza and Giovanni Ferrari, he is one of only three Italian players to have won two World Cups. Following his retirement as a player, he worked as a coach for Italian clubs Como, Pro Sesto, Napoli, Sampdoria, and Juventus, as well as Swiss club Chiasso. He was posthumously inducted into the Italian Football Hall of Fame in 2013. 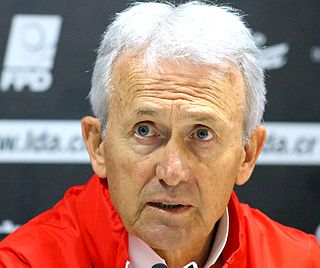 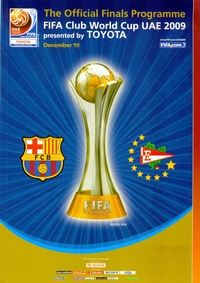 The 2009 FIFA Club World Cup Final was the final match of the 2009 FIFA Club World Cup, a football tournament for the champion clubs from each of FIFA's six continental confederations. The match took place at the Sheikh Zayed Stadium, Abu Dhabi, on 19 December 2009, and pitted Estudiantes of Argentina, the CONMEBOL club champions, against Barcelona of Spain, the UEFA club champions.

José Alfredo Peñaloza Soto is one of five Mexican football referees who have been born and raised in the capital of the Mexican republic. He has been a football professional referee since 2001.

Oliver Buff is a Swiss professional footballer who plays for as a midfielder for Grasshopper Club Zürich.

The Cuba women's national football team is the national women's football team of Cuba and is overseen by the Asociación de Fútbol de Cuba. In 2018, Cuba qualified for its first ever CONCACAF Women's Championship after finishing third in Caribbean Zone Qualifying.

The 2015 CONCACAF Men's Olympic Qualifying Championship is an international under-23 age restricted football tournament that was held in United States from 1 October to 13 October 2015. The 8 national teams involved in the tournament were required to register a squad of 20 players, including three goalkeepers. Only players in these squads were eligible to take part in the tournament.