He played his club football for Mufulira Blackpool, Mufulira Wanderers and Nchanga Rangers, and after retirement he became Konkola Blades’ coach.

Bwalya was born in Mufulira to Benjamin Bwalya Sr and Elidah Bwalya and when the family moved to Ndola he went to Kansenshi Primary School from 1968 to 1974. He did his secondary school education at Mufulira Secondary from 1975 and upon completion, went for the compulsory national service training camp in 1981. In 1978, his father travelled to Madagascar with Wanderers and bought Bwalya his first pair of Adidas boots, a pair which he treasured and swore to keep and hang in his house for his children to see. [2]

Bwalya joined Mufulira Blackpool in 1978 where it was quite a challenge playing alongside names like John Lengwe, Simon Kaushi and the player he admired the most, Alex Chola. His young brother Kalusha would follow to watch him play and he eventually joined Blackpool as well. Bwalya could play all forward positions but featured mainly as a right winger, in contrast to his left-footed younger brother who was solely a left winger. In 1981 they moved to the mine-sponsored giants Wanderers at the behest of their father, who felt they were better off playing for the club that was sponsored by the company he worked for. [2]

That same year, he travelled to Lubumbashi with Wanderers and they took part in two friendlies against St. Louis Lupopo and TP Mazembe. It was during this tour that he earned the nickname ‘Boga’ after which he admitted that he did not bother to find out what it meant but the name spread like wildfire in Mufulira. [2]

The hugely talented Bwalya left Wanderers in 1984 for Chingola-based Premier League rivals Nchanga Rangers who he would play for until 1991 after which he retired from playing and coached briefly as one of the assistants at Rangers before joining Konkola Blades in 1992 as coach.

Bwalya made a single appearance for Zambia in a friendly against Malawi in 1985 in Ndola which ended in a 1-1 draw. [3]

Upon retirement, Bwalya took up coaching and briefly worked as one of the assistants at Nchanga Stadium before moving to neighbouring Konkola Blades as head coach. Under him, Blades developed into a strong team and won the 1998 Mosi Cup after beating Zanaco FC 2-1 in Lusaka. He also served as coach for the U-17 and U-20 national teams and worked as one of the assistant coaches to Roald Poulsen at the senior national team. He was also appointed assistant coach to Ben Bamfuchile in 1998.

In January 1999, Bwalya travelled with the national team to Madagascar for a CAN qualifier. On the day of the match, he fell ill and missed the game which Zambia won 2-1. When the team returned, he was admitted to Malcolm Watson Hospital with suspected cerebral malaria on January 27. Bwalya died in hospital on the night of 9 February 1999. The passing of the young coach who was just coming into his own was described as a terrible loss to the football fraternity. [5]

Kalusha Bwalya is a Zambian former international footballer. He is Zambia's eighth-most capped player and third on the list of all-time top goalscorers behind Godfrey Chitalu and Alex Chola. Kalusha was named African Footballer of the Year in 1988 by the magazine France Football and was nominated for the 1996 FIFA World Player of the Year where he was voted the 12th-best player in the world, the first to be nominated after playing the entire year for a non-European club.

David Efford Chabala, popularly known as Efford Chabala was Zambia's first choice goalkeeper from 1983 until his death in a plane crash off the Gabonese coast in 1993 and is Zambia's most capped player, with 108 full international appearances. Chabala was instrumental in Zambia's first ever East and Central African Championship success when he saved three penalties in Zambia's 3–0 shoot-out victory over Malawi in the 1984 final in Uganda after a goalless draw at full-time. He was named Zambia's Sportsman of the Year in 1985.

The Zambia Cup or Mosi Cup is the top knockout tournament of the Zambian football. It was created in 1962. 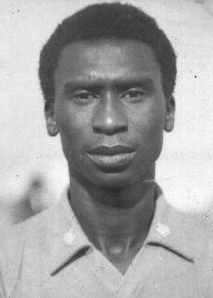 Alex Chola was a Zambian footballer and coach. Voted Zambian Footballer of the Year in 1976, he is regarded as one of the greatest Zambian players in history and is the country's second highest goal scorer after Godfrey Chitalu. He made a mark at Mufulira Blackpool and Power Dynamos before becoming Dynamos coach and winning the Coach of the Year award in 1992. Chola died in a plane crash off the coast of Gabon on 27 April 1993.

Samuel Ndhlovu was a Zambian footballer and coach. Nicknamed "Zoom", he led the "Mighty" Mufulira Wanderers to unparalleled league and cup triumphs for almost two decades. He was named Zambian Sportsman of the Year in 1964 and also served the national team as captain and coach. He is widely regarded as Zambia's best local coach.

Ashious Jordan Melu also known as Ashios or Ashols Melu was a Zambian footballer and coach who captained the national team from 1988 to 1992 and is credited with having one of the hardest shots in Zambian football.

Johnson Bwalya is a Zambian former footballer. He played for the Zambian national team and represented the country at the Olympics.

Mufulira Wanderers are Zambia's most successful football club, based in the Copperbelt town of Mufulira and currently playing in the Zambia National Division One after their 2019/2020 season relegation.

Roan United is a Zambian football club based in Luanshya. The club is a current member of the Zambian Premier League although they were most successful during the early years of Zambian football. Indeed, they were the inaugural winners of the ZPL, clinching what was then called the Northern Rhodesia National Football League in 1962. They play their home matches at Kafubu Stadium.

Dickson Kenneth Makwaza was a Zambian football player and coach. Nicknamed "Barbed-Wire" due to his tenacity in defence, he was one of the most decorated players in Zambian soccer history and was captain of the Zambian national team that made its first ever appearance at the African Cup of Nations tournament in Egypt in 1974. Makwaza also captained Mufulira Wanderers and was voted Zambian footballer of the year in 1973. He later coached Wanderers and several other club sides.

Vincent Chileshe is a Zambian coach and former goalkeeper. He was crowned Zambian player of the year in 1977 at the age of 20, the first goalkeeper to achieve that feat, and was in goal for Zambia at CAN 1978. He is currently coaching Zambian Division 2 side Young Green Eagles.

Bernard Chanda was one of Zambia's greatest strikers and was the league top scorer three times. Nicknamed 'Bomber,' he played for three of Zambia's biggest clubs – Roan United, Mufulira Wanderers and Rokana United, and is remembered for scoring a hat-trick in the 4–2 semi-final victory over Congo at the 1974 African Cup of Nations tournament. Chanda was voted Zambian Footballer of the Year in 1974 and is fourth on the list of all-time goal scorers for Zambia in international matches behind Godfrey Chitalu, Alex Chola and Kalusha Bwalya with 29 goals.

Dick Chama was a Zambian footballer and coach who played as a centre-back. He was Zambia's defensive stalwart from the late '60s to the mid '70s and formed a formidable central defence pairing alongside Dickson Makwaza and was part of Zambia's squad during the country's very first CAN outing in 1974 and made the official CAF team of the tournament. Chama was voted Zambian Sportsman of the Year in 1975 and after retirement, he coached several club sides as well as the national team.

Fighton Simukonda was a Zambian coach and former footballer. He was part of the Nkana Red Devils side of the 1980s, winning five league titles, and he also captained Zambia. As a coach, he won several Zambian Premier League titles and became the first coach to lead a Zambian club to the group phase of the CAF Champions' League.

George Lwandamina is a former Zambian footballer and head coach of Azam. He had a brief playing career with Zambia and won several trophies as a defender with Mufulira Wanderers.

Webster 'Webby' Chikabala was a Zambian football player and coach. One of the best players of his generation, he represented his country at the African Cup of Nations in 1990 and 1992, and was the first Zambian to play professional football in Portugal when he joined Maritimo in August 1990. He died in 1998 due to an illness related to HIV/AIDS.

John “Ginger” Pensulo was a former Zambian footballer and coach. A key player for Roan United, he led the club to the Zambian league title in its inaugural season in 1962 and was one of the men behind the team's fluid style of play, being involved in various coaching roles.

Joel Kangala Bwalya is a Zambian football coach and former player. He has been an assistant coach at Zanaco since January 2020.