Benjamin Harrison III (1673 – April 10, 1710) was an American politician in the Colony of Virginia. He was an early member of the Harrison family of Virginia, serving as the colony's attorney general, treasurer, and Speaker of the House of Burgesses. He was the great grandfather of President William Henry Harrison and the great-great-great grandfather of President Benjamin Harrison.

William Henry Harrison was an American military officer and politician who served as the ninth president of the United States in 1841. He died of typhoid, pneumonia or paratyphoid fever 31 days into his term, becoming the first president to die in office. His death sparked a brief constitutional crisis regarding succession to the presidency, because the Constitution was unclear as to whether Vice President John Tyler should assume the office of president or merely execute the duties of the vacant office. Tyler claimed a constitutional mandate to become the new president and took the presidential oath of office, setting an important precedent for an orderly transfer of the presidency and its full powers when the previous president fails to complete the elected term.

Harrison was born in 1673, the son of Benjamin Harrison II and Hannah Churchill. [1] He purchased a portion of land from the land patent of Berkeley Hundred where he raised his family with his wife Elizabeth, daughter of Lewis Burwell II. This location was home to the first official Thanksgiving held on December 4, 1619, and where his son Benjamin Harrison IV began to construct the family's Berkeley Plantation in 1726. [2]

Berkeley Hundred in the Virginia Colony comprised about eight thousand acres (32 km²) on the north bank of the James River near Herring Creek in an area then known as Charles Cittie (sic). It later became known as Berkeley Plantation, and was long the traditional home of the Harrison family, one of the First Families of Virginia.

Benjamin Harrison IV was an American Virginia planter, politician, and Member of the Virginia House of Burgesses. He was the son of Benjamin Harrison III and the father of Benjamin Harrison V, who was a signer of the Declaration of Independence and the fifth governor of Virginia. Harrison built the homestead of Berkeley Plantation, which is believed to be the oldest three-story brick mansion in Virginia and is the ancestral home to two presidents: his grandson William Henry Harrison, and his great-great-grandson Benjamin Harrison. The Harrison family and the Carter family were both powerful families in Virginia, and they were united when Harrison married Anne Carter, the daughter of Robert "King" Carter. His family also forged ties to the Randolph family, as four of his children married four grandchildren of William Randolph I.

Berkeley Plantation, one of the first plantations in America, comprises about 1,000 acres (400 ha) on the banks of the James River on State Route 5 in Charles City County, Virginia. Berkeley Plantation was originally called Berkeley Hundred and named after the Berkeley Company of England. Benjamin Harrison IV built on the estate what is believed to be the oldest three-story brick mansion in Virginia and is the ancestral home to two Presidents of the United States: William Henry Harrison, his grandson, and Benjamin Harrison his great-great-grandson. It is now a museum property, open to the public.

Harrison became the Attorney General of the Virginia Colony in 1697 at age 24, serving until 1702 [3] before moving on to the House of Burgesses between 1703–1706, where he was the Speaker in 1705. He became Treasurer of the colony in 1705, serving until his death in 1710. [2] Harrison began to compile the history of the colony shortly before he died, leaving it unfinished. [4]

Benjamin Harrison V, of Charles City County, Virginia, was an American planter and merchant, a revolutionary leader, and a Founding Father of the United States. He received his higher education at the College of William and Mary and was a representative to the Virginia House of Burgesses for Surry County, Virginia and Charles City County. He was a Virginia delegate to the Continental Congress from 1774 to 1777 and a signer of the Declaration of Independence during the Second Continental Congress. He served as Virginia's fifth governor from 1781 to 1784. His direct descendants include two presidents: his son William Henry Harrison and his great-grandson Benjamin Harrison.

The Harrison family of Virginia is an American political family. Members include a Founding Father of the nation and three U.S presidents, as well as state governors, legislators, mayors, and professionals. 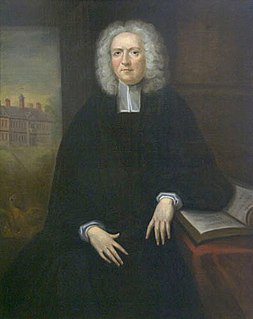 James Blair was a Scottish-born clergyman in the Church of England. He was also a missionary and an educator, best known as the founder of the College of William & Mary in Williamsburg, Virginia, US.

Edward Randolph, sometimes referred to as Edward Randolph of Bremo, was a ship captain, a London tobacco merchant, and the seventh and youngest son of William Randolph and Mary Isham.

Thomas Batts was an early settler in Virginia and an explorer of western Virginia.