Benjamin Yoram Mwila (September 17, 1943 – August 17, 2013), often known as BY, [1] [2] was a Zambian politician and businessman. Mwila was a prominent leader and co-founder of the Zambia Republican Party. [2] He served as an MP for Luanshya in the National Assembly. Mwila held several cabinet portfolios within the cabinet of President Frederick Chiluba during the 1990s, including Minister of Defence from 1991 to 1997. [1] [2] [3]

Mwila was originally a member of the Movement for Movement for Multi-Party Democracy (MMD), [2] whose other members included Frederick Chiluba. Chiluba was elected President of Zambia in 1991. [2] Mwila was also elected to the National Assembly as an MP from the Luanshya constituency in the 1991 general election. [2] President Chiluba appointed Benjamin Mwila as a member of his cabinet. [2] He served as Minister of Defence from 1991 to 1997, and he also served for a time as Minister of Energy and Water Development. [2]

Mwila left the MMD in 2000 after being criticized by fellow party members for considering a presidential candidacy. [3] He founded the Zambia Republican Party. [2] Mwila ran for President of Zambia in the 2001 presidential election as leader of the Zambia Republican Party. [2] Levy Mwanawasa of the MMD won the 2001 election, while Mwila garnered approximately 4.84% of the vote. [2]

In 2006, Mwila's Zambia Republican Party merged with several other political parties to form the National Democratic Focus (NDF). [3] That same year, Mwila was elected to the National Assembly from the Nchelenge constituency under the NDF ticket. [3] In 2011, Mwila left the NDF and rejoined the MMD. [3] He ran for his re-election to his parliamentary seat from Nchelenge, but was defeated in the 2011 general election. [3]

Mwila died at a hospital in South Africa on August 17, 2013, at the age of 70. [1] He had been hospitalized for treatment of malaria for two weeks. [2] His funeral was held at the Cathedral of the Holy Cross in Lusaka with the burial at the city's Memorial Park Cemetery. [1]

The Zambia Republican Party is a political party in Zambia.

Michael Charles Chilufya Sata was a Zambian politician who was the fifth President of Zambia, from 23 September 2011 until his death on 28 October 2014. A social democrat, he led the Patriotic Front (PF), a major political party in Zambia. Under President Frederick Chiluba, Sata was a minister during the 1990s as part of the Movement for Multiparty Democracy (MMD) government. He went into opposition in 2001, forming the PF. As an opposition leader, Sata – popularly known as "King Cobra" – emerged as the leading opposition presidential contender and rival to President Levy Mwanawasa in the 2006 presidential election, but was defeated. Following Mwanawasa's death, Sata ran again and lost to President Rupiah Banda in 2008. 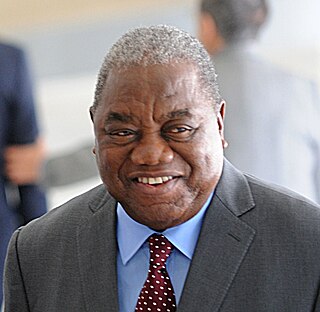 The National Democratic Focus (NDF) was a political alliance in Zambia.

Enoch P. Kavindele is a Zambian businessman and politician who served as the seventh vice president of Zambia from 2001 until 2003.

Dipak Kumar A. Patel is a Zambian politician of Hindu Indian origin. His ancestral roots traces back to Gujarat, India. He served long tenures both as a legislator and as the Minister of Trade, Commerce, and Industry. 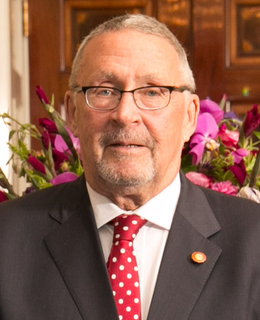 Vera Tembo is a Zambian politician and member of the Movement for Multi-Party Democracy (MMD). She served as the First Lady of Zambia from 1991 until her separation from her former husband, President Frederick Chiluba, in 2001.

Paul Simon Tembo was a Zambian politician. He served as Member of the National Assembly for Kabwe from 1991 until 1996, and as Deputy Minister of Finance.

Chipepo Peter Friday Malwa is a Zambian politician. He served as Member of the National Assembly for Kapiri Mposhi from 2006 until 2011.