Benjamin Tucker Tanner (December 25, 1835 – January 14, 1923) was an American clergyman and editor. He served as a Bishop in the African Methodist Episcopal Church from 1886, and founded The Christian Recorder (see Early American Methodist newspapers), an important early African American newspaper.

He was born to Hugh and Isabella Tanner in Pittsburgh, Pennsylvania. He studied for five years at Avery College, paying his expenses by working as a barber. [1] As a student in Pittsburgh, his classmates included Jeremiah A. Brown, Thomas Morris Chester, and James T. Bradford. [2]

He then studied for three years at Western Theological Seminary. At twenty five he was appointed to Sacramento by Bishop Daniel A. Payne, but he could not afford to go, so he moved to Washington, D. C. where he organized a Sunday School for freed slaves in the Navy Yard with the permission of Admiral John A. Dahlgren. In 1863 he became pastor of a church in Georgetown. In 1866 he moved to a large church in Baltimore. Shortly later he was appointed principal of the Annual Conference School at Fredericktown, Maryland, and he organized a common school under the auspices of the Freedmen's Bureau. In 1868 he was elected chief secretary of the general conference of the AME church and founded and became editor of the church newspaper, the Christian Recorder, a role he served for 16 years. In 1870 he was given an A. M. degree by Avery College and in the 1870s he was given an honorary D. D. by Wilberforce University. In 1884 he was made editor of the A. M. E. Review, and he was the author of a number of books and pamphlets in the 1870s and 1880s, including: 'Apology for African Methodism;' 'The Negro's Origin; and Is He Cursed of God,' 'An Outline of our History and Government;' 'The Negro, African and American.' [1]

In 1889, Tanner was focused on missionary work in Haiti and William B. Derrick was serving as mission secretary. In August, it was found that the mission treasury was empty. AME leader, Daniel A. Payne demanded of Derrick what had happened to the funds. Derrick had been giving money to the Haitian mission in cash, which was not in itself a cause of trouble, but may have led to misuse of the funds. Tanner was hesitant to settle the dispute, but Derrick improved his place in the view of the AME leaders over the next few years and the pair reconciled. [3]

He was a participant in the March 5, 1897 meeting to celebrate the memory of Frederick Douglass which founded the American Negro Academy led by Alexander Crummell. [4] Until 1905, he was a participating member of this first major African American learned society, which was led by scholars, activist, editors, and bishops like Tanner. It refuted racist scholarship, promoted black claims to individual, social, and political equality, and studied the history and sociology of African American life. [5] Tanner was the father of artist Henry Ossawa Tanner and the physician Halle Tanner Dillon Johnson, and the grandfather of Sadie Tanner Mossell Alexander. Tanner died on January 14, 1923 in Washington D.C. 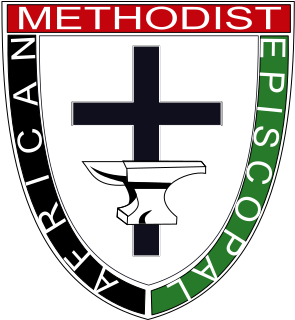 Benjamin William Arnett was an American educator, minister, bishop and member of the Ohio House of Representatives.

Theophilus Gould Steward was an American author, educator, and clergyman. He was a U.S. Army chaplain and Buffalo Soldier of 25th U.S. Colored Infantry.

William Sanders Scarborough is generally thought to be the first African American classical scholar. Born into slavery, Scarborough served as president of Wilberforce University between 1908 and 1920. He wrote a popular university textbook in Classical Greek that was widely used in the 19th century.

William J. Simmons was an ex-slave who became Simmons College of Kentucky's second president (1880–1890) and for whom the school eventually was named. Simmons greatly developed Howard University's teacher training programs when he took over the school. In addition, he was a writer, journalist, and educator. In 1886 he became president of the American National Baptist Convention, one of the organizations that would merge to form the National Baptist Convention, USA. He was elected president of the Colored Press Association for his work as editor of the American Baptist, a newspaper in Louisville, Kentucky.

Benjamin Bosworth Smith was an American Protestant Episcopal bishop, and the Presiding Bishop of his Church beginning in 1868.

Jabez Pitt Campbell was a minister, activist, philanthropist and the eighth bishop of the African Methodist Episcopal Church (AME), the first independent African-American church in the United States.

William H. Crogman was a pioneering African American educator and classicist at Clark University of Atlanta in the United States. The William H Crogman School in Atlanta is named for him.

William B. Derrick was an African Methodist Episcopal (AME) bishop and missionary. He worked as a seaman early in his life and served in the Union Navy during the US Civil War. After the war, he joined the AME church and became involved in church leadership and missionary activities. He became a bishop of the church in 1896. He was also involved in Republican politics and civil rights.

Jeremiah A. Brown was a politician and civil rights activist in the American city of Cleveland, Ohio. Early in his life, Brown worked on steamboats with Mark Twain. He later moved to Cleveland, where he was elected to the Ohio House of Representatives in 1885 where together with Benjamin W. Arnett, he played an important role in fighting black laws, supporting education, and working for the civil rights of Ohio's African Americans. He also held numerous state and national political appointments.

James Walker Hood was an African Methodist Episcopal Zion Church bishop in North Carolina from 1872 to 1916. Before emancipation, he was an active abolitionist, and during the American Civil War he went to New Bern, North Carolina where he preached for the church to the black people and soldiers in the area. He was very successful and became an important religious and political leader in North Carolina, becoming "one of the most significant and crucial African American religious and race leaders during the nineteenth and early twentieth centuries". By 1887 he had founded over six hundred churches in Virginia, North Carolina, and South Carolina and erected about five hundred church buildings. He was politically and religiously active as well, supporting education, civil rights, and the ordination of women.

Edmund Kelly was the first African-American Baptist minister ordained in Tennessee. He escaped slavery in the 1840s to New England and returned after the US Civil War. He worked as a preacher and teacher in Columbia, Tennessee and was a frequent participant in national Baptist Conventions.

Daniel Abraham Gaddie was a Baptist preacher in Louisville, Kentucky. He was known for his leadership in state and national Baptist organizations.

John W. Stevenson was an African Methodist Episcopal (AME) Church minister. He was the financier and builder of the Metropolitan African Methodist Episcopal Church in Washington, DC, which was the largest black church in the country at the time of its building. He was a talented fundraiser and built a number of other churches and was pastor of many churches in Maryland, New Jersey, Pennsylvania, New York, and New England. He was an important figure in the church and eventually held the position of presiding Elder of the New York district. 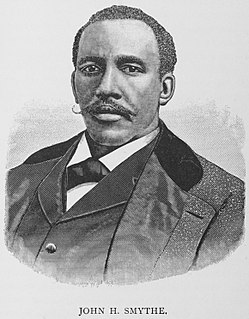 John H. Smythe was the United States ambassador to Liberia from 1878 to 1881 and from 1882 to 1885. Before his appointment, he had various clerkships in the federal government in Washington, DC and in Wilmington, North Carolina. Later in his life he took part in a number of leading African American organizations and was president of a Reformatory School outside of Richmond, Virginia.

Benjamin Franklin Lee was a religious leader and educator in the United States. He was the president of Wilberforce University from 1876 to 1884. He was editor of the Christian Recorder from 1884 to 1892. He was then elected a bishop in the African Methodist Episcopal (AME) church, serving from 1892 until his resignation in 1921, becoming senior bishop in the church in 1915.

John Campbell Dancy was a politician, journalist, and educator in North Carolina and Washington, DC. For many years he was the editor of African Methodist Episcopal (AME) Zion church newspapers Star of Zion and then Zion Quarterly. In 1897 he was appointed collector of customs at Wilmington, North Carolina, but was chased out of town in the Wilmington insurrection of 1898, in part for his activity in the National Afro-American Council which he helped found that year and of which he was an officer. He then moved to Washington, DC where he served as Recorder of Deeds from 1901 to 1910. His political appointments came in part as a result of the influence of his friend, Booker T. Washington.

John Mifflin Brown was a bishop in the African Methodist Episcopal (AME) Church. He was a leader in the underground railroad. He helped open a number of churches and schools, including the Payne Institute which became Allen University in Columbia, South Carolina and Paul Quinn College in Waco, Texas. He was also an early principal of Union Seminary which became Wilberforce University. 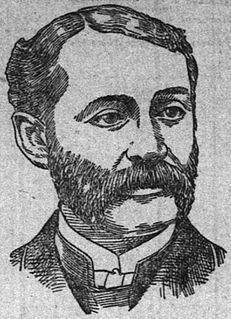 James Matthew Townsend was an African Methodist Episcopal (AME) minister and a state legislator from Indiana. He served in the legislature in the 1884 session. From 1889 to 1891 he was recorder at the General Land Office in Washington, DC, appointed by President Benjamin Harrison.