Berehove (Ukrainian : Берегове; Hungarian : Beregszász) is a city located in Zakarpattia Oblast (province) in western Ukraine, near the border with Hungary. It is the cultural centre of the Hungarian minority in Ukraine.

Serving as the administrative center of Berehove Raion (district), the city itself is also designated as a city of oblast significance, with a status equal to a separate raion, with a population of 23,485 (2021 est.) [2] .

Part of the city is also a near adjacent village of Zatyshne of 504 people that has its representation in the city's council.

Hungarian has been made a regional language in Berehovo in September 2012; meaning it will now be used in the town's administrative office work and documents. [6] This was made possible after new legislation on languages in Ukraine was passed in the summer of 2012. [6]

From 1920 until 1938 it was part of Czechoslovakia. Prior to World War II, the city had a significant Jewish population, estimated at 8,000 persons. Only four returned following the war. [9]

A local newspaper has been published here since December 1945. [10]

The first Hungarian-language college in Ukraine is in Berehovo, the II. Rákoczi Ferenc College. [14]

Berehove is twinned with: 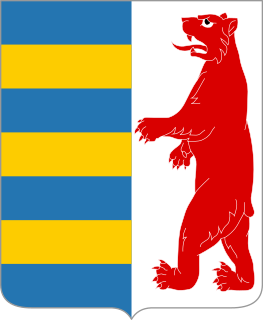 Carpathian Ruthenia is a historical region on the border between Central and Eastern Europe, mostly located in western Ukraine's Zakarpattia Oblast, with smaller parts in eastern Slovakia and the Lemko Region in Poland. 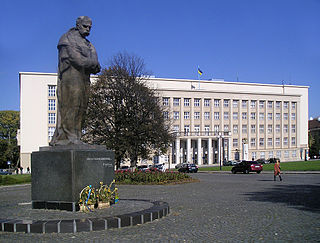 The Zakarpatska Oblast is an administrative oblast located in western Ukraine, coterminous with the historical region of Carpathian Ruthenia. Its administrative centre is the city of Uzhhorod (Ungvár), Other major cities within the oblast include Mukachevo (Munkács), Khust (Huszt), Berehove (Beregszász), and Chop (Csap) which is home to railroad transport infrastructure. 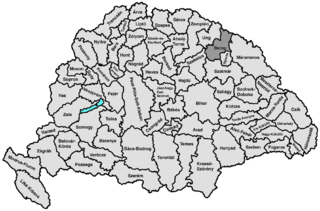 Bereg was an administrative county (comitatus) of the Kingdom of Hungary. Its territory is now mostly in western Ukraine and a smaller part in northeastern Hungary. The capital of the county was Beregszász.

Vynohradiv is a city in western Ukraine, in Zakarpattia Oblast. It was the center of Vynohradiv Raion and since 2020 it has been incorporated into Berehove Raion. Population: 25,442

Izium is a city on the Donets River in Kharkiv Oblast (province) of eastern Ukraine. Izium is about 120 kilometres (75 mi) southeast of the oblast capital, Kharkiv. Izium has a population of 45,884 as of 2021.

Irshava is a city located in Zakarpattia Oblast (province) in western Ukraine. It was the administrative center of Irshava Raion (district) until it was abolished in 2020 and was merged with Khust Raion. Today, the population is 9,223 .

Bilopillia is a city and the administrative center of Bilopillia Raion in Sumy Oblast of northeastern Ukraine. It is located close to Kursk Oblast of Russia. Population: 15,850 The city's ancient name is Vyr.

Dobropillia is a city in the Pokrovsk Raion of the Donetsk Oblast (province) in Ukraine. Prior to 2020, it was a city of oblast significance and served as the administrative center of the former Dobropillia Raion, though it did not belong to the raion.

Novoselytsia is a city in Chernivtsi Raion, Chernivtsi Oblast (province) of Ukraine. It stands at the northern tip of Bessarabia region, on its border with Bukovina. It hosts the administration of Novoselytsia urban hromada, one of the hromadas of Ukraine. Population: 7,514.

Zastavna is a town in Chernivtsi Raion, Chernivtsi Oblast of Ukraine. Zastavna is located 26 kilometres (16 mi) to the north of the city of Chernivtsi, in the historical region of Bukovina. It hosts the administration of Zastavna urban hromada, one of the hromadas of Ukraine. Population: 7,807.

Northern Maramureș is a geographic-historical region comprising roughly the eastern half of the Zakarpattia Oblast in southwestern Ukraine, near the border with Romania. Until 1920, it was part of the Maramureș subregion of Transylvania, at which time the former Máramaros County was divided into a northern part, and a southern part.

The Hungarians in Ukraine number 156,600 people according to the Ukrainian census of 2001 and are the third largest national minority in the country. They are the first biggest Hungarian diaspora in the world. Hungarians are largely concentrated in the Zakarpattia Oblast, where they form the largest minority at 12.1% of the population. In the area along the Ukrainian border with Hungary, Hungarians form the majority.

Berehove Raion is a district (raion) in Zakarpattia Oblast (province) in the westernmost corner of Ukraine. The administrative center is Berehove. For many centuries the territory of the district was part of Bereg County. Population: 207,719

Vynohradiv Raion was a raion of Zakarpattia Oblast in western Ukraine. Its administrative center was the city of Vynohradiv. The raion was abolished and its territory was merged into Berehove Raion on 18 July 2020 as part of the administrative reform of Ukraine, which reduced the number of raions of Zakarpattia Oblast to six. The last estimate of the raion population was 120,795 .

Vylok is an urban-type settlement in Vynohradiv Raion (district) of Zakarpattia Oblast (region) in western Ukraine. Today, the population is 3,136 .

Batrad is a village in Zakarpattia Oblast (province) of western Ukraine.

Andrea Bocskor is a Hungarian politician and Member of the European Parliament (MEP) from Hungary. She graduated in English-History at the Trascarpathian Hungarian Teachers' Training College. She did her PhD in 2010 at the ELTE-BTK in Budapest. In 2013, she held the title of Candidate of Historical Sciences in Kiev at the Institute of Ukrainian History-National Academy of Science. Before becoming an MEP, she was a docent of the Ferenc Rákóczi II Transcarpathian Hungarian Institute in the Faculty of History and Social Sciences, and Director of the Lehoczky Tivadar Institute in Berehove, Ukraine. She has served as MEP since 2014.

Wikimedia Commons has media related to Berehove, Zakarpattia Oblast .
This page is based on this Wikipedia article
Text is available under the CC BY-SA 4.0 license; additional terms may apply.
Images, videos and audio are available under their respective licenses.