Berliner, or "midi", is a newspaper format with pages normally measuring about 315 by 470 millimetres (12.4 in × 18.5 in). The Berliner format is slightly taller and marginally wider than the tabloid/compact format; and is both narrower and shorter than the broadsheet format. [1]

The Berliner format is an innovation in press and an alternative to the broadsheet format. [2] The name refers to the city of Berlin, and was originally contrasted with "North German" and "French" sizes in the early 20th century.

The Berliner format is used by many European newspapers, including dailies such as Le Monde and Le Figaro in France, Le Temps in Switzerland, La Repubblica and La Stampa [3] in Italy, De Morgen , Le Soir and Het Laatste Nieuws in Belgium, Oslobođenje in Bosnia, Mladá fronta Dnes and Lidové noviny in the Czech Republic, and others such as Expresso in Portugal and Jurnalul Național or Evenimentul Zilei in Romania. The French business newspaper Les Échos changed to this format in September 2003, and the largest daily papers in Croatia ( Večernji list ), Serbia ( Politika ) and Montenegro ( Vijesti ), are also in this format. A recent European newspaper to join this trend is Het Financieele Dagblad , the daily Dutch newspaper that is focused on business and financial matters on 26 March 2013. Student publication The University Observer became Ireland's first Berliner-sized paper in September 2009. The Independent in London considered adopting this format, but could not afford to buy new presses; it ultimately became a tabloid size.

Although the daily Berliner Zeitung is occasionally called simply Berliner, it is not printed in Berliner format. In fact, only two German national dailies use Berliner format: Die Tageszeitung (generally known as the "taz"); and the Junge Welt , which in 2004 abandoned the unique slightly-larger-than-A4 size that had distinguished it since the early 1990s. The majority of the national quality dailies use the larger broadsheet format known as "nordisch", measuring 570 mm × 400 mm (22.44 in × 15.75 in).

The daily Journal & Courier in Lafayette, Indiana was the first newspaper in North America to be produced in this format, making its debut on 31 July 2006. [4] The Bucks County Herald in Lahaska, Pennsylvania, followed in 2009, and The Chronicle in Laurel, Mississippi, in April 2012, commencing publication at that time. Major papers such as the Chicago Tribune and The Cincinnati Enquirer have tested the format.

Since then, a number of broadsheet newspapers throughout the United States and Canada have adopted a page format similar to Berliner, though some may use a taller page. In some instances, only the width has changed from the typical broadsheet page, and the height has remained the same or close to it. For example, The New York Times used a 22-inch (559 mm) tall by 13.5-inch (343 mm) wide page, but in 2007 downsized to 22 by 12 in (559 by 305 mm). [5] [6] It still refers to itself as a broadsheet, even though its size is closer to Berliner.

The Indian business daily Mint , a collaboration with the Indian media house Hindustan Times Media Limited (HTML) and The Wall Street Journal , was among the first newspapers to use the Berliner format, starting from 1 February 2007. In Nepal, the Nepali Times became the first and the only newspaper using this format. In Pakistan, the English daily Pakistan Today is published in the Berliner format. The Israeli newspaper Haaretz has been published in this format since 18 February 2007.

Though very rarely used in Metro Manila, the Berliner is the most popular format in the Philippines. In the Ilocandia, some of the well-known names are the Zigzag Weekly , the Northern Dispatch —commonly called as Nordis —and the Northern Philippine Times . In the Visayas, the Panay News (Visayas' most widely circulated newspaper) also uses this format. Though not published for commercial purposes, the official publication of Caritas Manila uses a slightly narrower Berliner format.

In March 2009, South Korea's JoongAng Ilbo adopted the Berliner format, becoming the first Korean newspaper to do so. Also in the same month, Turkey's Gazete Habertürk and Zaman adopted a variation of this format as 350 by 500 mm (13.78 by 19.69 in) and become two of the first Turkish newspaper to do so. The format is called Ciner format in Turkey because it is unique. [7] On 1 June 2012, the UAE's leading English language newspaper, Gulf News , adopted the Berliner format, the first ever in the Arab Middle East.

Some South American papers have dubbed the "compact" size as "Berliner". The former (also called "tall tab") size is closer to tabloid, being marginally taller. The Buenos Aires Herald , a daily Argentine newspaper founded in 1876, uses the Berliner format, which is also used by La Nueva, a newspaper of the Buenos Aires province. Córdoba newspaper La Voz switched to Berliner from broadsheet in 2016. The Bolivian Los Tiempos newspaper from Cochabamba releases its editions in Berliner with full color in all pages starting October 2017. Previously, the newspaper was published in broadsheet. Brazil's Jornal do Brasil , a daily Brazilian newspaper founded in 1891, was published in Berliner from 16 April 2006 until 31 August 2010, when the newspaper ceased to publish its physical issue and transferred all activities to the internet. Initially, only the newsstand edition was in that format, but its success made the format switch extend later to the subscriber's edition, which until then had remained in broadsheet format. In 2008, Salvador-based Correio* (formerly Correio da Bahia) switched to Berliner, also from broadsheet. After being sold by Organizações Globo (currently Grupo Globo) to J. Hawilla's Grupo Traffic, another Brazilian newspaper, Diário de S. Paulo , which was a broadsheet, switched to Berliner, bringing it in line with its sister publications under Rede Bom Dia (the company, including Diário de S. Paulo, is currently owned by Cereja Digital). In 2003, Chilean national newspaper La Tercera switched from tabloid to Berliner. Local papers around Chile have also adopted the format, most notably El Mercurio de Valparaiso, the longest-running Chilean newspaper of the Spanish language. As of 17 November 2017, the format expanded to Chilean La Cuarta , which previously published in tabloid, like La Tercera. The Preuvian El Comercio, the nation's most important newspaper, switched its weekday editions to Berliner in 2016. The weekend editions are still produced in broadsheet.

The Independent is a British newspaper that was established in 1986 as a national morning printed paper and is now an online newspaper only. Nicknamed the Indy, it began as a broadsheet and changed to tabloid format in 2003. The last printed edition was published on Saturday 26 March 2016, leaving only the online edition. 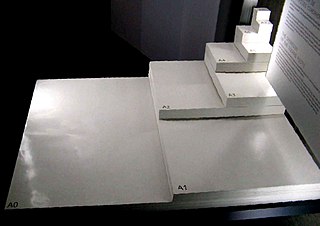 Paper size standards govern the size of sheets of paper used as writing paper, stationery, cards, and for some printed documents.

A compact newspaper is a broadsheet-quality newspaper printed in a tabloid format, especially one in the United Kingdom. The term as used for this size came into use after The Independent began producing a smaller format edition in 2003 for London's commuters, designed to be easier to read when using mass transit.

Blick is a Swiss German-language daily newspaper, published by Ringier in Zürich.

Las Últimas Noticias is a Chilean, daily middle market tabloid newspaper owned by El Mercurio SAP. This company publishes various newspapers for a different audience: El Mercurio people look up to and ability to view, mainly close to the reading, La Segunda mainly a diary of "synthesis" news and evening edition, and Las Últimas Noticias is made profile tabloid, focused mainly on entertainment and gossip, so it is one of the best-selling newspapers in the country. 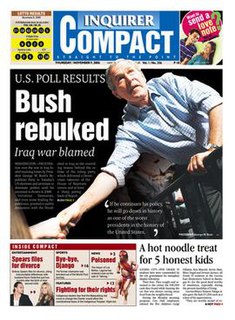 Quality press is a category of British newspapers in national circulation distinguished by their seriousness. The category used to be called "broadsheet" until several papers adopted a tabloid printing format. Both The Times and The Independent adopted a tabloid format in 2004. The Guardian adopted a Berliner format in 2005, before switching to tabloid in January 2018.