Burke,of Irish descent,was born at London and was educated in London and France. His father,John Burke (1787–1848),was also a notable genealogist who first produced,in 1826,a Genealogical and Heraldic Dictionary of the Peerage and Baronetage of the United Kingdom. This work,generally known as Burke's Peerage ,was issued annually starting in 1847. While practising as a barrister Bernard Burke assisted his father in his genealogical work,including the two volumes entitled The Royal Families of England,Scotland,and Wales,with their Descendants &c.,which were not published until after his father's death (volume 1 in 1848,volume 2 in 1851),following which he took control of his publications. In 1853 Burke was appointed Ulster King of Arms. [1] In 1854 he was knighted and in 1855 he became Keeper of the State Papers in Ireland. [2] After having devoted his life to genealogical studies he died in Dublin on 12 December 1892. He was succeeded as editor of Burke's Peerage and Landed Gentry by his fourth son,Ashworth Peter Burke. [2]

Sir Bernard's own works include: [2]

Burke's Peerage Limited is a British genealogical publisher founded in 1826,when the Irish genealogist John Burke began releasing books devoted to the ancestry and heraldry of the peerage,baronetage,knightage and landed gentry of Great Britain and Ireland. His first publication,a Genealogical and Heraldic Dictionary of the Peerage and Baronetage of the United Kingdom,was updated sporadically until 1847,when the company began releasing new editions every year as Burke's Peerage,Baronetage and Knightage.

Walter Steward of Dundonald was 3rd hereditary High Steward of Scotland and Justiciar of Scotia.

David Vines White,a member of the Royal Household,has since 2021 served as Garter Principal King of Arms.

Sir Anthony Richard Wagner was a long-serving officer of arms at the College of Arms in London. He served as Garter Principal King of Arms before retiring to the post of Clarenceux King of Arms. He was one of the most prolific authors on the subjects of heraldry and genealogy of the 20th century.

Arthur Charles Fox-Davies was a British expert on heraldry. His Complete Guide to Heraldry,published in 1909,has become a standard work on heraldry in England. A barrister by profession,Fox-Davies worked on several notable cases involving the peerage,and also worked as a journalist and novelist. 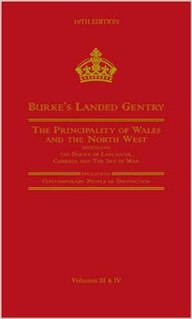 Burke's Landed Gentry is a reference work listing families in Great Britain and Ireland who have owned rural estates of some size. The work has been in existence from the first half of the 19th century,and was founded by John Burke. He and successors from the Burke family,and others since,have written in it on genealogy and heraldry relating to gentry families. It has evolved alongside Burke's Peerage,Baronetage &Knightage;the two works are regarded as complementing each other. Since the early 20th century the work also includes families that historically possessed landed property.

Sir Robert Douglas of Glenbervie,6th Baronet was a notable genealogist responsible for one of the major works on Scottish families,The Baronage of Scotland.

The High Sheriff of Tipperary was the Sovereign's judicial representative in County Tipperary. Initially an office for lifetime,assigned by the Sovereign,the High Sheriff became annually appointed from the Provisions of Oxford in 1258. Besides his judicial importance,he had ceremonial and administrative functions and executed High Court Writs.

John Burke was an Irish genealogist,and the original publisher of Burke's Peerage. He was the father of Sir Bernard Burke,a British officer of arms and genealogist.

English heraldry is the form of coats of arms and other heraldic bearings and insignia used in England. It lies within the so-called Gallo-British tradition. Coats of arms in England are regulated and granted to individuals by the English kings of arms of the College of Arms. An individual's arms may also be borne ‘by courtesy' by members of the holder's nuclear family,subject to a system of cadency marks,to differentiate those displays from the arms of the original holder. The English heraldic style is exemplified in the arms of British royalty,and is reflected in the civic arms of cities and towns,as well as the noble arms of individuals in England. Royal orders in England,such as the Order of the Garter,also maintain notable heraldic bearings.

The Fenton Baronetcy,of Mitchelstown in the County of Cork,was a title in the Baronetage of Ireland. It was created on 22 July 1661 for Maurice Fenton. The baronetcy became extinct on 17 March 1670,with the death of his son William Fenton.

Most prime ministers of the United Kingdom have enjoyed the right to display coats of arms and to this day,prime ministers can have their ancestral arms approved,or new armorial bearings granted,either by the College of Arms or the Lyon Court.

An ordinary of arms is a roll or register of coats of arms arranged systematically by design,with coats featuring the same principal elements grouped together. The purpose of an ordinary is to facilitate the identification of the bearer of a coat of arms from visual evidence alone.

The following is an armorial of the individuals,who have served as governor-general of New Zealand.

The following is an armorial of the individuals who have served as governor-general of the Commonwealth of Australia.