Bernard Parker (born 16 March 1986) is a South African professional association footballer who most recently played as a midfielder or forward for Premier Soccer League club Kaizer Chiefs. Between 2007 and 2015 he made 73 appearances for the South Africa national team scoring 23 goals.

Parker started his professional football career playing for Thanda Royal Zulu in the Premier Soccer League, where he made 70 appearances before a one year loan to Serbian side Red Star Belgrade. He joined Eredivisie side FC Twente in 2009, where he spent a season and a half before being loaned out to Panserraikos in the Greek Super League. During his time in the Eredivisie, Parker won the 2009-10 Eredivisie and the 2010 Johan Cruyff Shield.

He moved to Kaizer Chiefs in 2011. He was awarded the 2013–14 Lesley Manyathela Golden Boot and won two league titles, the Nedbank Cup and the MTN 8 with the South African club. Parker was released by Kaizer Chiefs in June 2022 after spending over a decade at the club, making over 350 appearances and scoring over 60 goals.

Parker was born and grew up in Reiger Park, a township next to Boksburg, Gauteng. He was quite good in a variety of sports and excelled in short and long-distance running as well as achieving Eastern Gauteng colours in swimming.

A product of the School of Excellence, Parker made his debut in the professional ranks for Cape Town's Hellenic FC, later bought and renamed Benoni Premier United. After the club was once again renamed and moved to Durban he remained with Thanda Royal Zulu F.C. until early 2009 when he obtained a transfer to European Cup Winners Red Star in Serbia. His stay in Belgrade was cut short after reports that the club had cash flow problems and owed its players' salaries. [4]

Parker signed with FC Twente in July 2009 and was a member of the team that won the Dutch 2009–10 Eredivisie. After Twente manager Steve McClaren's move to Bundesliga, Parker failed to convince new coach Michel Preud'homme of his qualities and thus spent the first half of the 2010–11 Dutch season mostly on the bench. He joined Leicester City on trial in December 2010 with a view to a permanent move away from the Dutch club. On 18 January 2011, he moved to Panserraikos F.C. on loan, to secure extra game time and returned to FC Twente after the end of the 2010–11 season.

After receiving interest from Swedish clubs Malmö FF and Helsingborgs IF as well as South Africa's Kaizer Chiefs, Parker chose the latter ahead of the other clubs. [5] In the 2012–13 season, Parker scored 12 league goals in 28 matches and finished as runner up to Katlego Mashego who had 13 and helped Chiefs to a league and cup double. [6] The following season, he won the Lesley Manyathela Golden Boot with 10 goals. [7]

After Parker spent over a decade at Kaizer Chiefs, the club decided not to renew his contract that was to expire on 30 June 2022. [8] He scored over 60 goals in 350 appearances there. [9]

Bernard Parker had his national team debut against Malawi in 2007, scoring his first goal in 2008 against the same team. On 17 June 2009, he scored both goals in a 2–0 win over New Zealand in the 2009 Confederations Cup, [10] and also received the Man of the Match award. [11] He played in 2010 FIFA World Cup representing South Africa but the team was eliminated after group stage. He also played in 2013 African Cup of Nations hosted in South Africa.

On 16 June 2013, Parker scored an own goal in a 2–1 defeat to Ethiopia which ended South Africa's chances of qualifying for the 2014 World Cup. Earlier in the match he had given South Africa a 1–0 lead. [12] Parker also scored by chipping the ball over Víctor Valdés in the 56th minute in a 1–0 shock win over the then-world and European champions Spain at Soccer City, where it won the World Cup in 2010. [13] Parker won the top goalscorer award at the 2014 African Nations Championship with four goals from three group matches. [14]

Kaizer Chiefs Football Club is a South African professional soccer club based in Naturena, Johannesburg South, that plays in the Premier Soccer League. The team is nicknamed AmaKhosi, which means "Lords" or "Chiefs" in Zulu, and the Phefeni Glamour Boys. Chiefs have won 13 league titles and over 50 club trophies. As a result, they hold the most trophies amongst all clubs in South Africa and are the most successful team in South African football history since the start of the top flight in 1970. They are the most supported club in the country, drawing an average home attendance of 16,144 in the 2019–20 season, the highest in the league. The team plays its home matches at the 94,797 capacity FNB Stadium.

Orlando Pirates Football Club is a South African professional football club based in the Houghton suburb of the city of Johannesburg and plays in the top-tier system of Football in South Africa known as Premier Soccer League, The team plays its home matches at Orlando Stadium in Soweto. It is the younger brother of Kaizer Chiefs.

Collins Mbesuma is a Zambian professional footballer who plays for South African club Pretoria Callies. He is nicknamed The Hurricane or Ntofontofo.

Isaac Chansa, popularly known as "Zife", is a Zambian professional footballer who plays as a midfielder for Forest Rangers in the Zambia Super League. 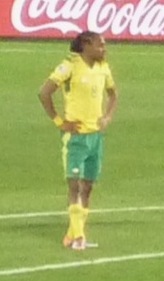 The Lesley Manyathela Golden Boot is an annual association football award presented by the Premier Soccer League to the leading goalscorer in the South African Premier Division. The award, colloquially known as the PSL Golden Boot or simply the Golden Boot, has been presented since the inception of the post-apartheid format of the league in 1996. It was named in 2003 in honour of Lesley Manyathela, a South African international footballer and former recipient of the award who died in a motor vehicle collision in August of that year.

Cuthbert Malajila is a Zimbabwean footballer who plays as a forward for Premier Soccer League side Black Leopards in South Africa. He also plays for the Zimbabwe national football team.

Kamohelo Mokotjo is a South African professional soccer player who plays as a defensive midfielder. After beginning his career in his native South Africa, he came to prominence in the Netherlands with FC Twente and later played in England for Brentford and in the United States for FC Cincinnati. He represents South Africa at international level. 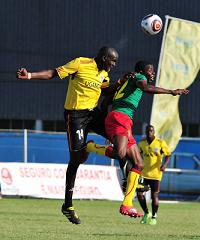 Nhlanhla Brilliant Khuzwayo is a South African retired international footballer who played as a goalkeeper.