Bernt Holtsmark (27 December 1859 – 20 April 1941) was a Norwegian farmer and politician for the Conservative Party and the Liberal Left Party. He was a four-term member of the Parliament of Norway, and served as Minister of Agriculture from 1910 to 1912. He was also known for establishing the agricultural college at Sem in his native Asker.

In October 1887 he married Johanne Amalie Koller, a daughter of Carl Theodor Fredrik Koller. The marriage lasted until her death in February 1917. Holtsmark then married Ingeborg Mathilde Bye in June 1919. [4]

He attended a private agricultural school at Østensjø from 1876 to 1878, the Higher College of Agriculture at Aas from 1883 to 1884 and the Landwirtschaftliche Hochschule Berlin (Agricultural University of Berlin) from 1885 to 1886. [1] In 1887, together with his brother Wilhelm, he established an agricultural college at the farm Sem, [5] today known as a manor [6] which in 2001 lent its name to the Declaration of Sem of the second cabinet Bondevik. [7] They ran the college until 1914. [5] In 1893 he took over the farm Tveter, and was a farmer there. [1] His book Husdyrlære, a textbook on livestock, came in 1897 and was reprinted fourteen times, last in 1961. [8] Also, he contributed to the newspapers and magazines Budstikken, Dagbladet , Verdens Gang , Tidens Tegn and Allers with writings on agriculture. [1]

He was elected to the Parliament of Norway from the constituency Akershus Amt in 1903, and was re-elected in 1906. He first represented the Conservative Party, and in the second term he was registered for the Coalition Party. [1] On 1 March 1910, he was appointed as the new Minister of Agriculture in the cabinet Konow, succeeding Wollert Konow (SB) in the position. He held office until the cabinet fell in February 1912. [9] He was later re-elected in 1915 and 1918 to serve a further two parliamentary terms, this time for the Liberal Left Party. [1]

He was a chairman of the Liberal Left Party for a period. He was also a chairman of the Norwegian Fire Protection Association, and a member of the board of Norsk Husflidsforening, Norsk Landmandsforbund, the Royal Norwegian Society of Development from 1898 to 1907 and 1919 to 1931, and Havedyrkningens Venner from 1916 to 1935. He received honorary membership in the two latter organizations. From 1927 to 1936 he worked as director and chair of Norges Hypotekbank, and he was also a member of several public boards, agencies and committees. [1] He was decorated as a Commander of the Royal Norwegian Order of St. Olav in 1912. [8]

Halvor Stenstadvold is a Norwegian businessperson and politician for the Conservative Party. A political scientist by education, he spent most of his career in the Federation of Norwegian Industries and Orkla Group. He has also been the chair of the Norwegian Broadcasting Corporation, the Research Council of Norway and the Oslo Stock Exchange. As a politician he has been acting mayor of Bærum municipality as well as State Secretary.

Leif Andreas Larsen was a Norwegian telegrapher and politician for the Labour Party.

Ringstabekk is a district in Bærum, Norway. Named after the local farm, the district is also known for its schools and the sports field. The sports club Stabæk IF originates in the area.

Øverland is an area in Bærum, Norway. Named after the local farm, Øverland is also known as a recreational area and for its arboretum. It has lent its name to the river Øverlandselva.

Bent Holtsmark (1823–1903) was a Norwegian agriculturalist and politician.

Torger Holtsmark was a Norwegian farmer and politician for the Conservative Party.

Homewood is a property in Sandvika, Bærum, Norway. It is known historically as the home of Otto Sverdrup, and has been municipal-owned since 1962.

John Torgersen was a Norwegian businessperson and politician.

Håkon Stenstadvold was a Norwegian painter, illustrator, journalist, art critic and politician for the Conservative Party. 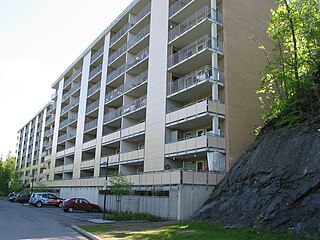 Skytterdalen is a small, populated valley north of Sandvika in Bærum, Norway.

Grini is a district in northeastern Bærum, Norway.

Rolf Thommessen was a Norwegian journalist, newspaper editor and politician. He edited the newspaper Tidens Tegn from 1917 to 1938. He was a member of the Parliament of Norway from 1928 to 1930, representing the Liberal Left Party.

Ramstad is a district in central Bærum, Norway. It is known mainly for its school and a former station on the Drammen Line. 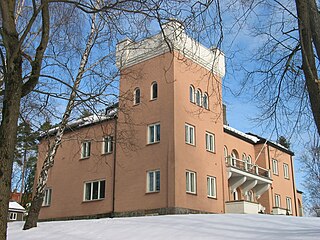 Nadderud is a district in eastern Bærum, Norway. It was formerly farmland under one of Bærum's larger farms, named Nadderud, but since the 1950s it has been built up with housing, several schools and sporting facilities. The best known facility, which has made the name Nadderud nationally known, is the stadium Nadderud stadion. Parts of the district Nadderud have been absorbed by the growing suburban centre Bekkestua.

Gjønnes is a district in eastern Bærum, Norway.

Voll is a district in eastern Bærum, Norway.

Jar Idrettslag is a Norwegian sports club from Bærum, Akershus. It mainly covers the areas Jar, Lysaker and parts of Stabekk.

Frithjof Møinichen Plahte was a Norwegian merchant and landowner. After a career in the timber business, he settled in Bærum where he invested in business and in several farms. His family socialized within the upper echelon in the capital city region, and he stood behind the establishment of Høvik Church and the use of Fleskum farm by a group of painters.