Last updated May 27, 2021
For other people with similar names, see Albert Cohen (disambiguation).

Coan was the central figure in a dispute over the 1960 college football game between the University of Kansas Jayhawks and the University of Missouri Tigers, the second-longest-running rivalry in college football (known as the "Border War"). Coan played for Kansas - and helped the Jayhawks win the 1960 game by a score of 23-7 over Missouri, then-ranked #1. But later, the Big Eight declared Coan ineligible, due to a recruiting violation by Bud Adams while Coan was still at Texas Christian University (TCU) [1] and forfeited the game to Missouri—thus erasing Missouri's only loss on the field that year. Missouri counts the 1960 game as a win by forfeit, thus giving it the only undefeated and untied season in school history. The Big Eight also credited the 1960 game to Missouri. However, Kansas (and the NCAA) count the game as a Kansas victory. Ever since, the two universities have disputed the overall win-loss record in the long-running series. [2] [3]

Coan went on to play in 72 games in seven seasons in the American Football League; the first season with the San Diego Chargers, and the rest with the Kansas City Chiefs.

Billy Eugene Self Jr. is an American basketball coach. He is the current basketball coach at the University of Kansas, a position he has held since 2003. During his 18 seasons as head coach, he has led the Jayhawks to 15 Big 12 regular season championships, including a share of an NCAA record 14 consecutive Big 12 regular season championships (2005–2018). He has also led the Jayhawks to three NCAA Final Four appearances, and the 2008 NCAA championship. Self was inducted into the Naismith Memorial Basketball Hall of Fame in 2017. Self, as of the end of the 2020–21 season, has the 19th most wins among Division I coaches in NCAA history and 6th among active head coaches. He is the second-winningest coach in Kansas history, behind only Hall of Famer Phog Allen. 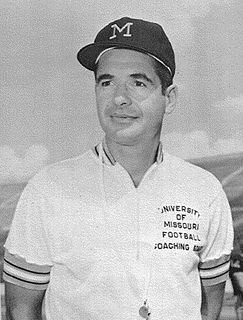 Daniel John Devine was an American football player and coach. He served as the head football coach at Arizona State University from 1955 to 1957, the University of Missouri from 1958 to 1970, and the University of Notre Dame from 1975 to 1980, compiling a career college football mark of 173–56–9. Devine was also the head coach of the National Football League's Green Bay Packers from 1971 to 1974, tallying a mark of 25–27–4. His 1977 Notre Dame team won a national championship after beating Texas in the Cotton Bowl. Devine was inducted into the College Football Hall of Fame as a coach in 1985.

The Kansas–Kansas State football rivalry is an American college football rivalry between the Kansas Jayhawks football team of the University of Kansas and Kansas State Wildcats football team of Kansas State University, contested since 1902, making it one of the longest running rivalry games in college football, with 118 match-ups as of 2020. The Governor's Cup is the trophy awarded to the winner of the game. It has been awarded every year since 1969. The rivalry is known as the Sunflower Showdown.

The Kansas Jayhawks men's basketball program is the intercollegiate men's basketball program of the University of Kansas. The program is classified in the NCAA's Division I and the team competes in the Big 12 Conference. Kansas is considered one of the most prestigious college basketball programs in the country with 5 overall National Championships, as well being a National Runner-Up six times and having the most conference titles in the nation. Kansas is the all-time consecutive conference titles record holder with 14 consecutive titles, a streak that ran from 2005 through 2018. The Jayhawks also own the NCAA record for most consecutive NCAA Tournament appearances with an active streak of 31 consecutive appearances. They were also, along with Dartmouth, the first teams to appear in multiple NCAA Tournaments after making their second appearance in the 1942 tournament. The Jayhawks had been ranked in the AP poll for 232 consecutive polls, a streak that had stretched from the poll released on February 2, 2009 poll through the poll released on February 8, 2021, which is the longest streak in AP poll history. Of the 24 seasons the Big 12 conference has been in existence, Kansas has won at least a share of 19 Regular Season Conference titles.

The Sunflower Showdown is the series of athletic contests between Kansas State University and the University of Kansas athletic programs, most notably football and men's basketball. The name is derived from the official nickname for the state of Kansas: the Sunflower State. 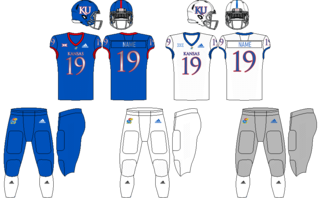 The Kansas Jayhawks football program is the intercollegiate football program of the University of Kansas. The program is classified in the National Collegiate Athletic Association (NCAA) Division I Bowl Subdivision (FBS), and the team competes in the Big 12 Conference. The Jayhawks are led by head coach Lance Leipold.

The 2008 FedEx Orange Bowl was a post-season college football bowl game between the Virginia Tech Hokies and the Kansas Jayhawks on January 3, 2008, at Dolphin Stadium in Miami Gardens, Florida. Spread bettors favored Virginia Tech by three points, but in a game dominated by defensive and special teams play, Kansas defeated Virginia Tech 24–21. The game was part of the 2007–08 Bowl Championship Series (BCS) of the 2007 NCAA Division I FBS football season and was the concluding game of the season for both teams. This 74th edition of the Orange Bowl was televised in the United States on FOX and was watched by more than eight million viewers.

The 2007 Kansas Jayhawks football team represented the University of Kansas in the 2007 NCAA Division I FBS football season. Looking to improve on the previous season's 6–6 overall record, the team finished the 2007 season with a 12–1 overall record. The twelve victories set a new school record. Additionally, the Jayhawks won their first eleven games before their first loss which was the most consecutive wins to start a season in school history. Additionally, the Jayhawks reached a ranking of 2 during their 11–0 start, the highest rank achieved by the team in school history. Their defeat of the Virginia Tech Hokies in the Orange Bowl was the school's first and only Orange Bowl and BCS bowl game victory. Their only loss was versus a Northern Division rival, the Missouri Tigers, in their final regular season game which resulted in a co-championship of the Northern Division, but denied them a trip to the Big 12 Championship Game. For their achievements the team was awarded the Stanley Tools Breakthrough of the Year Award. The Jayhawks were ranked 7th in the final AP poll and received a 1st place vote.

Todd Reesing is a former American football quarterback. He played in college at the University of Kansas. After graduating from Kansas, he briefly spent time with the Saskatchewan Roughriders of the Canadian Football League during their 2010 off-season. After his career was over, he began doing color commentary for the Jayhawk Television Network. Reesing led the Jayhawks to their best start in school history, winning their first 11 games of the 2007 season. The Jayhawks finished the season 12–1 and won the 2008 Orange Bowl, the schools first and only BCS Bowl victory. Reesing owns Kansas career passing records in several categories, passing yards, passing touchdowns, quarterback rating, completions, attempts, and completion percentage, as well as single game records for passing yards and passing touchdowns. He is also top 10 all-time in the Big 12 in passing yards and passing touchdowns.

The Border War is the name given to the Kansas–Missouri football rivalry. It has been officially named the Border Showdown since 2004. It is a college rivalry between athletic teams from the University of Kansas and University of Missouri, the Kansas Jayhawks and the Missouri Tigers, respectively. Athletic competition between the two schools began in 1891. From 1907 to 2012 both schools were in the same athletic conference and competed annually in all sports. Sports Illustrated described the rivalry as the oldest rivalry west of the Mississippi River in 2011, but it has been dormant since Missouri departed the Big 12 Conference for the Southeastern Conference on July 1, 2012. Despite Missouri wanting to continue athletic competition, no further regular season games were scheduled between the two schools for several years. However, the two schools played an exhibition game in men's basketball on October 22, 2017, with Kansas defeating Missouri 93–87. Proceeds went to four different charities for Hurricane Harvey and Hurricane Maria relief funds. On October 21, 2019, the schools agreed to play six basketball games beginning in 2020, however, due to the COVID-19 pandemic, the renewal was postponed one season. Then, on May 2, it was announced that the agreement was made for football games to be played in 2025, 2026, 2031, and 2032.

The 2008 Kansas Jayhawks football team represented the University of Kansas in the 2008 NCAA Division I FBS football season. It was the school's 119th year of intercollegiate football. The team was looking to continue the success of the prior season in which they lost only a single conference game and went on to win the Orange Bowl. In the ninth week, after defeating Kansas State 52–21, the Jayhawks became Bowl eligible for the fourth consecutive year, a school record. Also, for the first time in school history, Kansas made back-to-back appearances in a Bowl game after accepting the invitation to play in the Insight Bowl versus the Minnesota Golden Gophers. The team finished the regular season with a victory over their archrival, the Missouri Tigers, in the Border War. The Jayhawks concluded the season with an 8–5 overall record.

The 2009 Kansas Jayhawks football team represented the University of Kansas in the 2009 NCAA Division I FBS football season, which was the school's 120th season and the eighth and final year under Mark Mangino, who resigned following the season under pressure from both an internal investigation into his treatment of players and discontent from the season's results. It was Ed Warinner's third season as offensive coordinator and fifth year overall. The Jayhawks played their home games at Memorial Stadium in Lawrence, Kansas and were members of the Big 12 Conference

The 1960 Missouri Tigers football team was an American football team that represented the University of Missouri in the Big Eight Conference during the 1960 NCAA University Division football season. The team compiled an 11–0 record, won the Big 8 championship, defeated Navy in the Orange Bowl, was ranked No. 5 in the final AP Poll, and outscored its opponents 295 to 93. Led by third-year head coach Dan Devine, the team played its home games at Memorial Stadium in Columbia, Missouri.

The 1961 Orange Bowl was the 27th edition of the college football bowl game, played at the Orange Bowl in Miami, Florida, on Monday, January 2. Part of the 1960–61 bowl game season, the fifth-ranked Missouri Tigers of the Big Eight Conference defeated the #4 Navy Midshipmen, 21–14.

The 1960 Kansas Jayhawks football team represented the University of Kansas during the 1960 NCAA University Division football season. The Jayhawks were led by third-year head coach Jack Mitchell and played their home games at Memorial Stadium in Lawrence, Kansas.

The 1980 Kansas Jayhawks football team represented the University of Kansas in the Big Eight Conference during the 1980 NCAA Division I-A football season. In their sixth season under head coach Don Fambrough, the Jayhawks compiled a 4–5–2 record, and were outscored by opponents by a combined total of 208 to 171. They played their home games at Memorial Stadium in Lawrence, Kansas.