The son of a glass painter, he was instructed in his art by Henri Trippet and Gerard Douffet successively. He visited Rome in 1638, and was invited by the Duke of Tuscany to Florence and employed in decorating one of his galleries. Thence he moved to Paris where he carried out some elaborate decorative work at Versailles and painted for the sacristy of the church of the Augustinians his picture of the Adoration of the Magi. He returned to Liège in 1647 and executed many paintings for the churches of his native town. In 1670 he was invited to return to Paris, and painted the ceiling of the audience room in the Tuileries. Louis XIV made him a professor of the Royal Academy of Paris. Towards the close of his life he returned to Liège and was elected a lay canon of the church of St. Paul, and painted several works for the Prince-Bishop of the city. His The Glorification of the Holy Cross is in St Bartholomew's Church, Liège. A few years before he died he reportedly fell into a state of profound melancholy and had to be placed under the care of a medical man, in whose house he died. It has been argued that his colouring is pale and weak and his figures somewhat artificial. He is believed to have painted a portrait of Colbert and by some writers is stated to have been a pupil at one time of Jordaens, but this has never been verified. Gerard de Lairesse was one of his pupils. [1]

Gerard van Honthorst was a Dutch Golden Age painter who became especially noted for his depiction of artificially lit scenes, eventually receiving the nickname Gherardo delle Notti. Early in his career he visited Rome, where he had great success painting in a style influenced by Caravaggio. Following his return to the Netherlands he became a leading portrait painter.

Vincenzo Camuccini was an Italian painter of Neoclassic histories and religious paintings. He was considered the premier academic painter of his time in Rome.

Marcus Gheeraerts the Elder, Marc Gerard and Marcus Garret was a Flemish painter, draughtsman, print designer and etcher who was active in his native Flanders and in England. He practised in many genres, including portraits, religious paintings, landscapes and architectural themes. He designed heraldic designs and decorations for tombs. He is known for his creation of a print depicting a map of his native town Bruges and the illustrations for a Dutch language publication recounting stories from Aesop's Fables. His attention to naturalistic detail and his practice of drawing animals from life for his prints had an important influence on European book illustration. His son Marcus the Younger became a prominent court painter at the English court.

Gerard or Gérard (de) Lairesse was a Dutch Golden Age painter and art theorist. His broad range of skills included music, poetry, and theatre. De Lairesse was influenced by the Perugian Cesare Ripa and French classicist painters such as Charles le Brun, Simon Vouet and authors such as Pierre Corneille and Jean Racine. His importance grew in the period following the death of Rembrandt. His treatises on painting and drawing, Grondlegginge Ter Teekenkonst (1701), based on geometry and Groot Schilderboek (1707), were highly influential on 18th-century painters.

Jan Gerritsz van Bronckhorst, Bronchorst, or Bronkhorst (1603–1661) was a Dutch Golden Age painter and engraver. He is considered today to be a minor member of the Utrecht Caravaggisti.

Gerard Seghers was a Flemish painter, art collector and art dealer. After a period of study and residence in Rome, he returned to Flanders where he became one of the leading representatives of the Flemish Caravaggisti movement. In his later career he abandoned the Caravaggist style and genre motifs to become an important painter of large altarpieces for local churches. 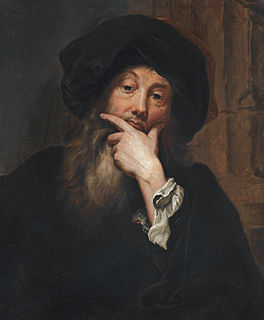 Anthoni Schoonjans, nicknamed Parhasius was a Flemish painter known for his portraits as well as his history paintings. After training in Antwerp he had an international career, which saw him work in various countries in Europe including France, Italy, Germany, Austria, The Dutch Republic and Denmark. He was a court painter in Vienna, Copenhagen, Berlin and Düsseldorf.

Peter, Peeter or Pieter Franchoys or Francois was a Flemish Baroque painter, who is mainly known for his portraits and religious paintings. 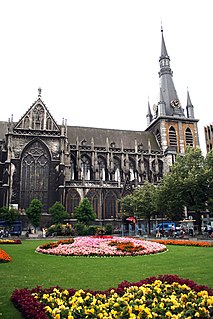 Liège Cathedral, otherwise St. Paul's Cathedral, Liège, in Liège, Belgium, is part of the religious heritage of Liège. Founded in the 10th century, it was rebuilt from the 13th to the 15th century and restored in the mid-19th century. It became a Roman Catholic cathedral in the 19th century due to the destruction of Saint Lambert Cathedral in 1795. It is the seat of the Diocese of Liège.

Gerard Hoet was a Dutch Golden Age painter and engraver. 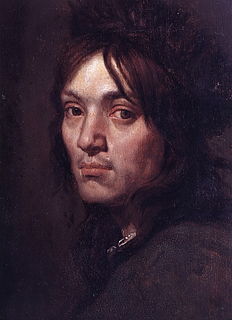 Jean-Guillaume Carlier, a Southern-Netherlandish painter, was born in Liège in 1638, and died there in 1675.

Isaac de Moucheron, was an 18th-century painter and interior decorator from the Northern Netherlands.

Gerard Edema or Gerard van Edema, was a Dutch landscape-painter who settled in England.

Évariste Carpentier,, was a Belgian painter of genre scenes and animated landscapes. Over the years, his painting evolved from the academic art to impressionism. He is, alongside Emile Claus, one of the earliest representatives of luminism in Belgium.

Despite its size, Belgium has a long and distinguished artistic tradition that goes back to the Middle Ages, considerably pre-dating the foundation of the current state in 1830. Art from the areas making up modern Belgium is called in English Netherlandish up to the separation with the Netherlands from 1570 on, and Flemish until the 18th century.

Daniël de Blieck, was a Dutch Golden Age painter, draughtsman and architect, who specialised in architectural paintings. He painted both real and imaginary church interiors.