Bertil Gotthard Ohlin (Swedish:  [ˈbæ̌ʈːɪl ʊˈliːn] ) (23 April 1899 –3 August 1979) was a Swedish economist and politician. He was a professor of economics at the Stockholm School of Economics from 1929 to 1965. He was also leader of the People's Party,a social-liberal party which at the time was the largest party in opposition to the governing Social Democratic Party,from 1944 to 1967. He served briefly as Minister of Commerce and Industry from 1944 to 1945 in the Swedish coalition government during World War II. He was President of the Nordic Council in 1959 and 1964.

Ohlin's name lives on in one of the standard mathematical models of international free trade,the Heckscher–Ohlin model,which he developed together with Eli Heckscher. He was jointly awarded the Nobel Memorial Prize in Economic Sciences in 1977 together with the British economist James Meade "for their pathbreaking contribution to the theory of international trade and international capital movements".

Bertil Ohlin was raised in Klippan,Scania with seven siblings where his father Elis was a civil servant and bailiff. His mother Ingeborg influenced him with her left-liberal views on the society,with nordic partnership and Karl Staaff as her role model. Having received his B.A. from Lund University 1917 and his MSc. from Stockholm School of Economics in 1919. He obtained an M.A. from Harvard University in 1923 and his doctorate from Stockholm University in 1924. In 1925 he became a professor at the University of Copenhagen. In 1929 he debated with John Maynard Keynes,contradicting the latter's view on the consequences of the heavy war reparations payments imposed on Germany. (Keynes predicted a war caused by the burden of debt,Ohlin thought that Germany could afford the reparations.) The debate was important in the modern theory of unilateral international payments.

In 1930 Ohlin succeeded Eli Heckscher,his teacher,as a professor of economics,at the Stockholm School of Economics. In 1933 Ohlin published a work that made him world-renowned,Interregional and International Trade. In this Ohlin built an economic theory of international trade from earlier work by Heckscher and his own doctoral thesis. It is now known as the Heckscher–Ohlin model,one of the standard model economists use to debate trade theory.

The model was a break-through because it showed how comparative advantage might relate to general features of a country's capital and labor,and how these features might change through time. The model provided a basis for later work on the effects of protection on real wages,and has been fruitful in producing predictions and analysis;Ohlin himself used the model to derive the Heckscher–Ohlin theorem,that nations would specialize in industries most able to utilize their mix of national resources efficiently. Today,the theory has been largely disproved,yet it is still a useful framework by which to understand international trade.

Later,Ohlin and other members of the "Stockholm school" extended Knut Wicksell's economic analysis to produce a theory of the macroeconomy anticipating Keynesianism.[ citation needed ]

Ohlin was party leader of the liberal Liberal People's Party from 1944 to 1967,the main opposition party to the Social Democrat Governments of the era,and from 1944 to 1945 was Minister of Commerce and Industry in the wartime government. His daughter Anne Wibble,representing the same party,served as Minister for Finance from 1991 to 1994.[ citation needed ]

In 2009,a street adjacent to the Stockholm School of Economics was named after Ohlin:"Bertil Ohlins Gata".[ citation needed ]

The following conditions must be true:

The theory does not depend on total amounts of capital or labor, but on the amounts per worker. This allows small countries to trade with large countries by specializing in production of products that use the factors which are more available than its trading partner. The key assumption is that capital and labor are not available in the same proportions in the two countries. That leads to specialization, which in turn benefits the country's economic welfare. The greater the difference between the two countries, the greater the gain from specialization.

Wassily Leontief made a study of the theory that seemed to invalidate it. He noted that the United States had a lot of capital; therefore, it should export capital-intensive products and import labor-intensive products. Instead, he found that it exported products that used more labor than the products it imported. This finding is known as the Leontief paradox.

In an economic model, agents have a comparative advantage over others in producing a particular good if they can produce that good at a lower relative opportunity cost or autarky price, i.e. at a lower relative marginal cost prior to trade. Comparative advantage describes the economic reality of the work gains from trade for individuals, firms, or nations, which arise from differences in their factor endowments or technological progress. 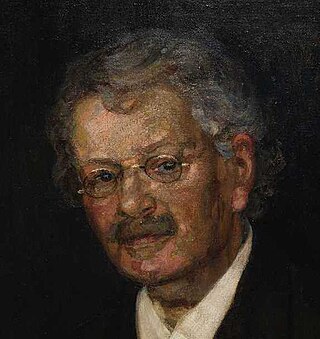 Factor price equalization is an economic theory, by Paul A. Samuelson (1948), which states that the prices of identical factors of production, such as the wage rate or the rent of capital, will be equalized across countries as a result of international trade in commodities. The theorem assumes that there are two goods and two factors of production, for example capital and labour. Other key assumptions of the theorem are that each country faces the same commodity prices, because of free trade in commodities, uses the same technology for production, and produces both goods. Crucially these assumptions result in factor prices being equalized across countries without the need for factor mobility, such as migration of labor or capital flows.

The Stolper–Samuelson theorem is a basic theorem in Heckscher–Ohlin trade theory. It describes the relationship between relative prices of output and relative factor rewards—specifically, real wages and real returns to capital.

The Rybczynski theorem was developed in 1955 by the Polish-born English economist Tadeusz Rybczynski (1923–1998). It states that at constant relative goods prices, a rise in the endowment of one factor will lead to a more than proportional expansion of the output in the sector which uses that factor intensively, and an absolute decline of the output of the other good. 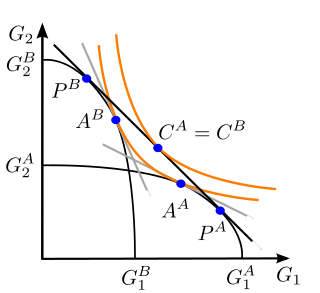 The Heckscher–Ohlin model is a general equilibrium mathematical model of international trade, developed by Eli Heckscher and Bertil Ohlin at the Stockholm School of Economics. It builds on David Ricardo's theory of comparative advantage by predicting patterns of commerce and production based on the factor endowments of a trading region. The model essentially says that countries export the products which use their relatively abundant and cheap factors of production, and import the products which use the countries' relatively scarce factors.

New trade theory (NTT) is a collection of economic models in international trade theory which focuses on the role of increasing returns to scale and network effects, which were originally developed in the late 1970s and early 1980s. The main motivation for the development of NTT was that, contrary to what traditional trade models would suggest, the majority of the world trade takes place between countries that are similar in terms of development, structure, and factor endowments.

Leontief's paradox in economics is that a country with a higher capital per worker has a lower capital/labor ratio in exports than in imports.

The Linder hypothesis is an economics conjecture about international trade patterns: The more similar the demand structures of countries, the more they will trade with one another. Further, international trade will still occur between two countries having identical preferences and factor endowments.

Intra-industry trade refers to the exchange of similar products belonging to the same industry. The term is usually applied to international trade, where the same types of goods or services are both imported and exported.

The gravity model of international trade in international economics is a model that, in its traditional form, predicts bilateral trade flows based on the economic sizes and distance between two units. Research shows that there is "overwhelming evidence that trade tends to fall with distance."

The Student Association at Stockholm School of Economics organizes all students enrolled at the Stockholm School of Economics (SSE). SSE is a leading European academic institution for education and research in the fields of economics, finance, corporate law, business, managerial sciences and marketing. It is situated in Stockholm, capital of Sweden. SASSE is affiliated with the Stockholm Federation of Student Unions.

In economics, the Metzler paradox is the theoretical possibility that the imposition of a tariff on imports may reduce the relative internal price of that good. It was proposed by Lloyd Metzler in 1949 upon examination of tariffs within the Heckscher–Ohlin model. The paradox has roughly the same status as immiserizing growth and a transfer that makes the recipient worse off.

Wikiquote has quotations related to Bertil Ohlin .
This page is based on this Wikipedia article
Text is available under the CC BY-SA 4.0 license; additional terms may apply.
Images, videos and audio are available under their respective licenses.