In mathematics, the Besov space (named after Oleg Vladimirovich Besov )

is a complete quasinormed space which is a Banach space when 1 ≤ p, q ≤ ∞. These spaces, as well as the similarly defined Triebel–Lizorkin spaces, serve to generalize more elementary function spaces such as Sobolev spaces and are effective at measuring regularity properties of functions.

Several equivalent definitions exist. One of them is given below.

and define the modulus of continuity by

contains all functions f such that

is equipped with the norm

is not an integer, then 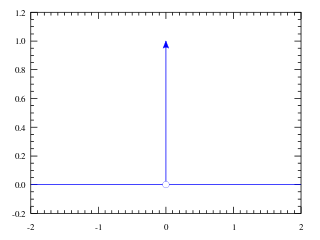 In physics and mathematics, the heat equation is a partial differential equation that describes how the distribution of some quantity evolves over time in a solid medium, as it spontaneously flows from places where it is higher towards places where it is lower. It is a special case of the diffusion equation.

In the theory of stochastic processes, the Karhunen–Loève theorem, also known as the Kosambi–Karhunen–Loève theorem is a representation of a stochastic process as an infinite linear combination of orthogonal functions, analogous to a Fourier series representation of a function on a bounded interval. The transformation is also known as Hotelling transform and eigenvector transform, and is closely related to principal component analysis (PCA) technique widely used in image processing and in data analysis in many fields.

A probabilistic metric space is a generalization of metric spaces where the distance has no longer values in non-negative real numbers, but in distribution functions.

In mathematics, there is in mathematical analysis a class of Sobolev inequalities, relating norms including those of Sobolev spaces. These are used to prove the Sobolev embedding theorem, giving inclusions between certain Sobolev spaces, and the Rellich–Kondrachov theorem showing that under slightly stronger conditions some Sobolev spaces are compactly embedded in others. They are named after Sergei Lvovich Sobolev.

In mathematics, the Poincaré inequality is a result in the theory of Sobolev spaces, named after the French mathematician Henri Poincaré. The inequality allows one to obtain bounds on a function using bounds on its derivatives and the geometry of its domain of definition. Such bounds are of great importance in the modern, direct methods of the calculus of variations. A very closely related result is Friedrichs' inequality.

In mathematics, particularly numerical analysis, the Bramble–Hilbert lemma, named after James H. Bramble and Stephen Hilbert, bounds the error of an approximation of a function by a polynomial of order at most in terms of derivatives of of order . Both the error of the approximation and the derivatives of are measured by norms on a bounded domain in . This is similar to classical numerical analysis, where, for example, the error of linear interpolation can be bounded using the second derivative of . However, the Bramble–Hilbert lemma applies in any number of dimensions, not just one dimension, and the approximation error and the derivatives of are measured by more general norms involving averages, not just the maximum norm.

In mathematics, the class of Muckenhoupt weightsAp consists of those weights ω for which the Hardy–Littlewood maximal operator is bounded on Lp(dω). Specifically, we consider functions  f  on Rn and their associated maximal functions M( f ) defined as

In functional analysis, a branch of mathematics, a Beppo Levi space, named after Beppo Levi, is a certain space of generalized functions.

In mathematics, Sobolev spaces for planar domains are one of the principal techniques used in the theory of partial differential equations for solving the Dirichlet and Neumann boundary value problems for the Laplacian in a bounded domain in the plane with smooth boundary. The methods use the theory of bounded operators on Hilbert space. They can be used to deduce regularity properties of solutions and to solve the corresponding eigenvalue problems.