Cuthbert was born to Leslie and Marion alongside her nonidentical [5] twin sister, Marie 'Midge'. She also had another sister, Jean and a brother, John. [6] [7] [8] [9] Cuthbert was born 20 minutes before Marie. [10] According to Midge, the twins were not alike, but very special to each other. [5] The daughter of nursery owners, Cuthbert was born in Merrylands, New South Wales and grew up in the Sydney suburb of Ermington, where she attended Ermington Public School. [11] Of her upbringing, Cuthbert stated "My parents always encouraged me and I had a good home life. We were always taught to respect things and other people." [12]

Marion attended church and sent her four children to Sunday school. [13] As a teenager, Cuthbert attended Parramatta Home Science School. She left school at the age of 16 to work in the family nursery. [7]

Cuthbert was a member of the Western Suburbs Athletic Club. [1] At the age of 18, with the 1956 Summer Olympics to be held in Melbourne, Cuthbert set a World Record in the 200 metres, making her one of the favourites for a gold in that event. Cuthbert first reached the finals of the 100 metres, setting an Olympic record of 11.4 seconds in her heat (also her personal best), while the Australian world record holder Shirley Strickland was eliminated.

Cuthbert won the final and was then the big favourite for the 200 metres title. She lived up to the expectations and became the Australian "Golden Girl". A third gold medal for Cuthbert came when she ran the final leg on in the 4 × 100 metres final, which the Australian team won in a new world record.

During 1958 Cuthbert set world records for 100 and 220 yards but was beaten in both events by arch-rival and double-Olympic bronze medallist Marlene Mathews at the Australian Championships. Later in the year, at the 1958 British Empire and Commonwealth Games in Cardiff, Wales, Cuthbert could only place fourth in the 100y and second in the 220y, again behind Mathews.

In the lead-up to the 1960 Summer Olympics, in Rome, Cuthbert set a world 220 yards and 200 metres record of 23.2 seconds in winning the Australian championships. At the Rome Games, she suffered from injury and was eliminated from the quarterfinals of the 100 metres. Subsequently, she retired from the sport of track and field.

Her retirement did not last long, though, for she returned at the 1962 British Empire and Commonwealth Games in Perth, Western Australia, helping Australia to a gold medal in the sprint relay.

Afterwards, she concentrated on the 400 metres, and she competed in that event in the 1964 Summer Olympics in Tokyo, when it was on the Olympic program for women for the first time. Though not impressive in the heats, Cuthbert won the title for her fourth Olympic gold medal, beating Ann Packer of Great Britain in an Olympic record of 52.01. [15] She is the only Olympian, male or female, to have won a gold medal in all sprint (running) events: 100, 200 and 400 metres. She subsequently verified her retirement for good after Tokyo. Also in 1964 she received the Helms Award for her sporting contributions. [16]

She was coached by June Ferguson, who was her physical education teacher in high school. [17] [7]

Cuthbert had suffered from multiple sclerosis from 1969 on and in 2002 had a severe brain haemorrhage. [18] She stated that, despite her MS, she never once asked God 'Why me?', and instead "knew that God wanted her to use it to help other people." [19] In 1985 Cuthbert became a born again Christian at the age of 47. [20] Always believing she was a Christian, the speaker at a public rally said there were private practising Christians present. She felt compelled to publicly declare her faith in Jesus. From then on, Cuthbert tried to share the good news of Jesus with as many people as possible. [21] She did, however, initially want to be healed of her MS, and someone encouraged her to go to church where she could be healed. She claimed she went, looking for healing, instead of the Healer. In her own words: "I found out about the healer, and then I couldn't care less about the healing. That's the best thing. I get so much joy out of it and I want to tell other people about it. I think that's why I was meant to come back to the Olympics in 1964 because now I'm well known and it helps me to tell people about Jesus." [22]

Following her diagnosis with multiple sclerosis, Cuthbert became a dedicated advocate for the disease and was an important player in the creation of MS Research Australia, attending the organisation's 2004 inauguration alongside then-PM John Howard. She was a tireless campaigner for national awareness of the disease, and, following her death in 2017, was credited by CEO of MS Research Australia, Dr. Matthew Miles, as having had an incredible impact on Australia's recognition and understanding of MS. [23]

In 1991, Cuthbert left her home state, New South Wales, for Western Australia, where she settled in Mandurah. [24] Cuthbert was one of the bearers of the Olympic Torch at the Opening Ceremony of the 2000 Summer Olympics in Sydney, New South Wales, Australia. Sitting in a wheelchair and accompanied by Raelene Boyle, she carried the Olympic Torch at the stadium, as one of the runners for the final segment, before the lighting of the Olympic Flame by Cathy Freeman. [25]

Cuthbert died in 2017, aged 79, [26] [27] in Mandurah. [28] Cuthbert never married or had children. [29] Rhonda Gillam, a 78-year-old West Australian mother-of-three, devoted the last 26 years of her life to caring for Cuthbert. [8] Gillam stated that Cuthbert's MS also took her hearing. [30] Cuthbert's twin sister, Midge Johnston, stated that Betty had been struggling with dementia in recent years, worrying that Betty would not remember her, but Betty always said "Midge, of course I remember you." [31]

The day after her death, there was a minute's silence before the start of competition at the 2017 World Athletics Championships in London, and Australian athletes were granted permission by the International Association of Athletics Federations to wear black armbands in competition. [32] Cuthbert was the only Australian among the 10 inaugural inductees to the IAAF Hall of Fame in 2012. [32] There were many tributes to Cuthbert's career and life from significant Australians:

Cuthbert's funeral was held on 16 August 2017 in Mandurah and her body was cremated at Fremantle Cemetery. [35] Several hundred were present, including: Margaret Court, Raelene Boyle, and Marjorie Jackson. Dawn Fraser (whom Cuthbert handed the Olympic Torch to during the opening ceremony of the 2000 Sydney Olympics) gave a speech. [36] Her twin sister, Midge, lit a candle of remembrance; and niece and nephew, Louise and Peter, also gave speeches. [37] A public memorial service for Cuthbert was held on 21 August 2017, at the Sydney Cricket Ground. [38] Tributes were led by broadcaster Alan Jones and Deputy Prime Minister Barnaby Joyce. Also in attendance were former athletes, Norma Fleming and Marlene Matthews. [39]

Cuthbert achieved 14 world records during her career comprising 10 individual and four relays. In addition she set a number of world best, including unclaimed records, and metric distance bests.

There are two books on Cuthbert's life: Golden girl as told to Jim Webster (1966) and Golden girl : an autobiography by Betty Cuthbert (2000).

Dawn Fraser is an Australian freestyle champion swimmer and former politician. She is one of only three swimmers to have won the same Olympic individual event three times – in her case the women's 100-metre freestyle.

Maureen Caird is an Australian former track athlete, who specialised in the sprint hurdles. At the 1968 Summer Olympics, she became the youngest-ever individual Olympic athletics champion at the time, at age 17, when she won gold in Mexico City.

Ann Elizabeth PackerMBE is an English former sprinter, hurdler and long jumper. She won a gold medal in the 800 metres and a silver in the 400 metres at the 1964 Summer Olympics. 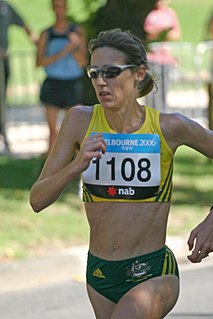 Kerryn McCann was an Australian athlete. She was best known for winning the marathon at the 2002 and 2006 Commonwealth Games. 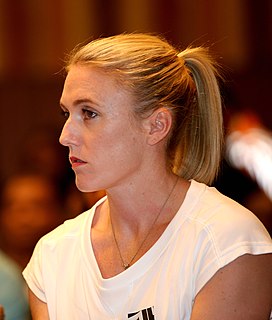 Clara Decima Hamilton, MBE was an Australian athlete. She was the only Australian woman who won five gold medals at the 1938 British Empire Games. 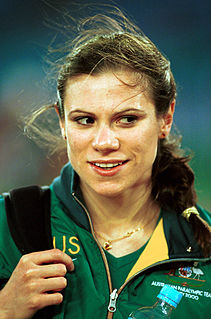 Lisa Christina Llorens, OAM(born 17 January 1978) is an Australian Paralympic athlete. She was born in Canberra. She specialises in Paralympic high jumping, long jumping, and sprinting, participating in competitions for athletes with autism. 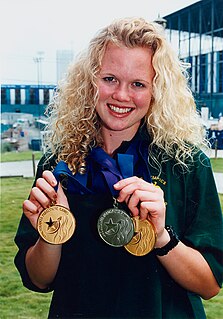