Last updated June 15, 2021
Not to be confused with Banmauk.
Place in Kachin State, Myanmar

Bhamo (Burmese : ဗန်းမော်မြို့ban: mau mrui., also spelt Banmaw; Shan :မၢၼ်ႈမူဝ်ႇ; Tai Nuea :ᥛᥫᥒᥰ ᥛᥨᥝᥱ; Chinese :新街, Hsinkai) is a city in Kachin State in northern Myanmar, 186 km (116 mi) south of the state capital, (Myitkyina). It is on the Ayeyarwady River. It lies within 65 km (40 mi) of the border with Yunnan Province, China. [3] The population consists of Chinese and Shan, with Kachin peoples in the hills around the town. It is the administrative center of Bhamo District and Bhamo Township.

From 1869 to 1879, it was the seat of British colonial Assistant political agent, subordinate to the Resident with the king of and in Ava. In the early 20th century, due to its location at the highest navigable point of the river, it formed a part of caravan routes bringing jade from India to China. [5]

Bhamo was once called Sampanago, the capital of the now-extinct Shan predecessor kingdom of Wanmaw. The ruins of the old city walls, dating from the fifth century, are found some 5 kilometres (3.1 mi) from the modern town. [ citation needed ]

Bhamo is one of the official border trading towns between China and Myanmar.

Bhamo has a climate that lies in the transition between humid subtropical climate (Köppen climate classification Cwa) and tropical savanna climate (Köppen climate classification Aw). Temperatures are very warm throughout the year, although the winter months (December–February) are milder. There is a winter dry season (November–April) and a summer wet season (May–October). 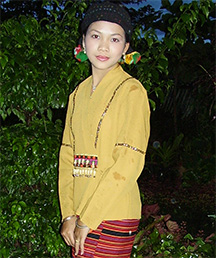 The Shan people, also known as the Dai or Tai Yai, are a Tai ethnic group of Southeast Asia. The Shan are the biggest minority of Burma (Myanmar) and primarily live in the Shan State of this country, but also inhabit parts of Mandalay Region, Kachin State, and Kayin State, and in adjacent regions of China, Laos, Assam and Thailand. Though no reliable census has been taken in Burma since 1935, the Shan are estimated to number 4–6 million, with CIA Factbook giving an estimate of five million spread throughout Myanmar which is about 10% of the overall Burmese population. 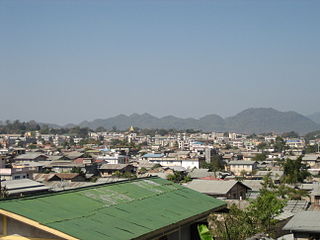 Lashio is the largest town in northern Shan State, Myanmar, about 200 kilometres (120 mi) north-east of Mandalay. It is situated on a low mountain spur overlooking the valley of the Yaw River. Loi Leng, the highest mountain of the Shan Hills, is located 45 km (28 mi) to the south-east of Lashio. 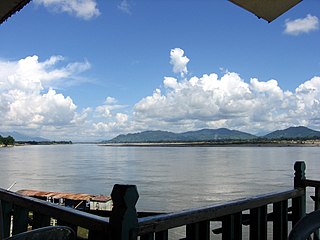 The Kachin Hills are a heavily forested group of highlands in the extreme northeastern area of the Kachin State of Burma. It consists of a series of ranges running mostly in a N/S direction, including the Kumon Bum subrange of which the highest peak is Bumhpa Bum with an elevation of 3,411 metres (11,191 ft) one of the ultra prominent peaks of Southeast Asia. 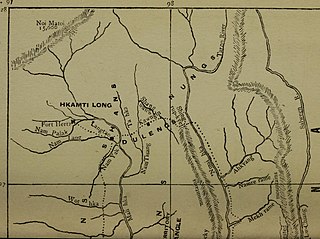 Hkamti Long, also known as Khandigyi was a Shan state in what is today Burma. It was an outlying territory, located by the Mali River, north of Myitkyina District, away from the main Shan State area in present-day Kachin State. The main town was Putao. 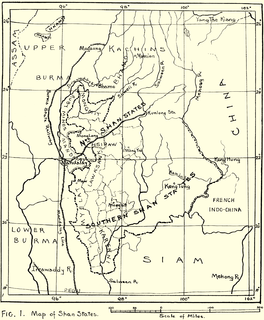 The Shan States (1885–1948) were a collection of minor Shan kingdoms called muang whose rulers bore the title saopha in British Burma. They were analogous to the princely states of British India. 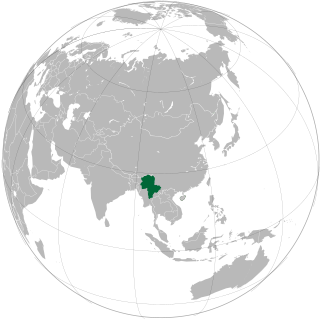 Mong Mao, Möngmao or the Mao Kingdom was an ethnic Dai state that controlled several smaller Tai states or chieftainships along the frontier of what is now Myanmar, China, the states of Northeast India of Assam, and Arunachal Pradesh, principally set in the Dehong region of Yunnan with a capital near the modern-day border town of Ruili. The name of the main river in this region is the Nam Mao, also known as the Shweli River.

Katha is a town in Sagaing Region, Myanmar, on the west side of the Irrawaddy River on a bluff with an average elevation of 124 m (407 ft). Most of the town is more than 10 m (33 ft) above the river. Katha is known for having inspired Kyauktada, the fictional setting of George Orwell's Burmese Days. 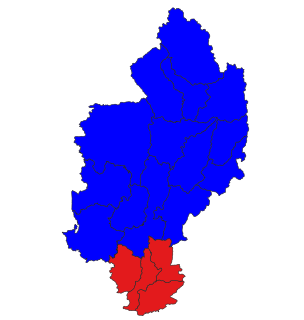 Rail transport in Myanmar began in 1877. Three private rail companies were nationalised nineteen years later. During the Japanese occupation of Burma, Allied prisoners of war were forced to build the Burma Railway. Myanmar Railways has expanded its network somewhat since 1988. 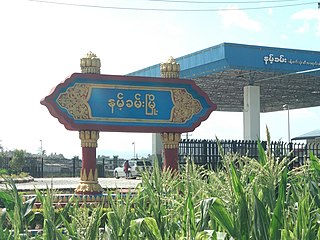 Namhkam, also spelled Nam Kham is the principal town of Namhkam Township in northern Shan State, Myanmar, situated on the southern bank of the Shweli River near the border with Yunnan Province, China.

Tagaung is a town in Mandalay Region of Myanmar (Burma). It is situated on the east bank of the Ayeyarwady River, 127 miles north of Mandalay. 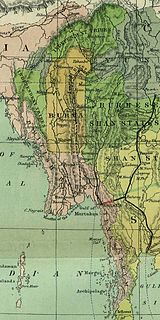 The Reverend George J. Geis was an American Baptist minister and anthropologist of German descent, best known for his missionary work in northeastern Burma. He promoted Christianity amongst the Kachin people, a group which he also studied, collecting general ethnographical data about them. He arrived in Burma with his wife in 1892, and spent most of the rest of his life there, establishing missions throughout Kachin State and Shan State. Geis is best known for his work in Myitkyina in Kachin State, but in the 1930s he established a mission in Kutkai in Shan State, and at the time of his death in 1936 was working there at the Kachin Bible Training School.

The Southwestern Tai, Southwestern Thai or Thailanguages are an established branch of the Tai languages of Southeast Asia. They include Siamese, Lanna, Lao, Isan, Shan and others.

Tai Laing, pronounced Tai Lai or regionally Tai Nai, is a Tai language of Burma, related to Khamti. It is written in its own variant of Burmese script, and though not taught in schools, is experiencing a cultural revival, albeit still small. There is no census of speakers, but they are estimated to number around 100,000. 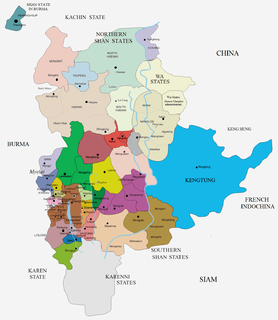 Hsenwi, also known as Theinni, was a Shan state in the Northern Shan States in what is today Burma. The capital was Hsenwi town. 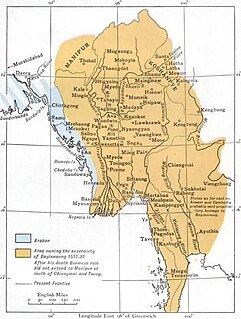 Mogaung or Möngkawng was a Shan state in what is present-day Myanmar. It was an outlying territory, located away from the main Shan State area in present-day Kachin State. The state existed until 1796. The main town was Mogaung.

Wanmaw, Manmaw or Banmaw (Bhamo) was a Shan state in what is today Burma. It was an outlying territory, located away from the main Shan State area in present-day Kachin State close to the border with China.